Bitcoin has gained this week to retest last week’s 4000 high. The following looks at the next targets and the technical barriers that could act as resistance on the way up.

March 21, 2019. | AtoZ Markets – After dropping to 3900 at the start of the week, the flagship cryptocurrency has found its way up again. On Wednesday, the top-ranked cryptocurrency hit 4000. If it maintains the upward run throughout the week and stays sufficiently above 4000, it will have achieved three consecutive weeks of gains. First, a rally from 3600 to 3900, followed by a dip to 3800 and another rally to 4000 and now a rally to make a new March high above 4000. Price is still a bit away from February’s high of 4200. Whether it will reach February top this week or before the month run out, remains to be seen.

After a sufficient move above 4000, further rallies could be limited upside as strong intraday resistance levels lie between 4100 and 4200. The nature of the current rally at 3300 since February looks likely to complete a triangle pattern. Crytpo price charts are not alien to triangle patterns. Some of the biggest moves seen were preceded by triangle patterns. Meanwhile, the breakout could happen to the upside to continue the 3100-to-4250 bullish run that happened between 15th and 24th December last year. 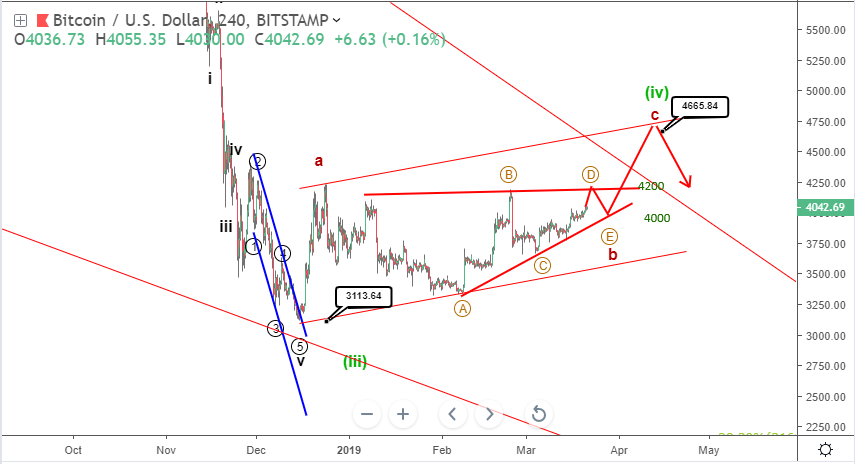 The current rally will most likely continue to 4200. However, the price might follow with another retest of 4000 before finally breaking upside if there is enough market momentum. The triangle pattern is getting narrow therefore a breakout is imminent. The triangle pattern might continue throughout March before an eventual breakout. The ultimate bullish target if the breakout happens upside, is 4500-4700.

The entire cryptocurrency market capitalization, according to data on Coinmarketcap, has surged this month to $141 billion to continue the current bounce or recovery. Many analysts still believe another leg to the downside might happen before the real recovery starts. It remains to be seen whether that would happen. The market has made a way up in 2019 and it’s completing a profitable first quarter. Bitcoin market cap has also surged to $72 billion from $62-65 billion that was seen early in the year. BTC trading volume this month has increased by over $1.5 billion in March to hit $10.2. However, its market dominance has declined to 50.8% from over 51% at the start of the year. This is due to a much better performance recorded by some altcoins since February.

Tags Bitcoin price prediction BTCUSD forecast Cryptocurrrency Elliott wave analysis
Forex Crypto
Top 5 Forex Brokers
Top 5 Crypto Exchanges
Your subscription could not be saved. Please try again.
Thank you for subscribing. You will be the first to receive all the latest news, updates, and exclusive advice from the AtoZ Markets experts.
Everyone is reading
Top 5 Forex MT5 Indicators for 2021 you should try
Top 5 Cryptos to Watch in Quarter 2 2021
Bitcoin Facing Resistance Around $60,000 Event Area - What Next?
close ×