Bitcoin bounces off $9,850 to return above $10,200. How soon could the current rally hit $11,000? The following technical analysis is based on the Elliott wave theory.

September 13, 2019 | AtoZ Markets - The cryptocurrency market has been a bit upbeat this week after the bearish end of the last week. About a week ago, BTC attempted to test the $11,000 handle. However, a fast dip happened instead and continued into the last weekend and early days of this week. Bitcoin dropped to $9,850. Meanwhile, this week has been bullish after a 5% gain in the last 24 hours. However, the current bullish run before the weekend is very small compared to last week.

It remains to be seen whether the bulls will build on this. On the short-term frame, we might see another test of the $11,000 and this time it might be breached. However, the bears could push back to $10,000 again. On the long-term frame, BTC price might remain between the $12,300 high and $9,100 low into the last quarter of the year.

Meanwhile, a fundamental analysis model has explained why the next bullish phase could drive Bitcoin price to $31,000 by 2021. According to the model, Bitcoin mining is growing at a very fast rate. Bitcoin hash rate is currently between 95EH/s and 98EH/s and is expected to surpass 100EH/s within a month to set an all-time record. The model also explained how the hash rate has a direct correlation with price growth. In addition, it's now 5% more difficult to discover a block. Difficulty and hash rates are some of the fundamental indicators to predict Bitcoin growth and both are on the upside thereby supporting long-term price positive growth.

In the last update, we identified two possible scenarios as BTC price continued sideways completing a triangle pattern. Where the price will breakout remains a major concern. The current sideways move might continue for a few more weeks. 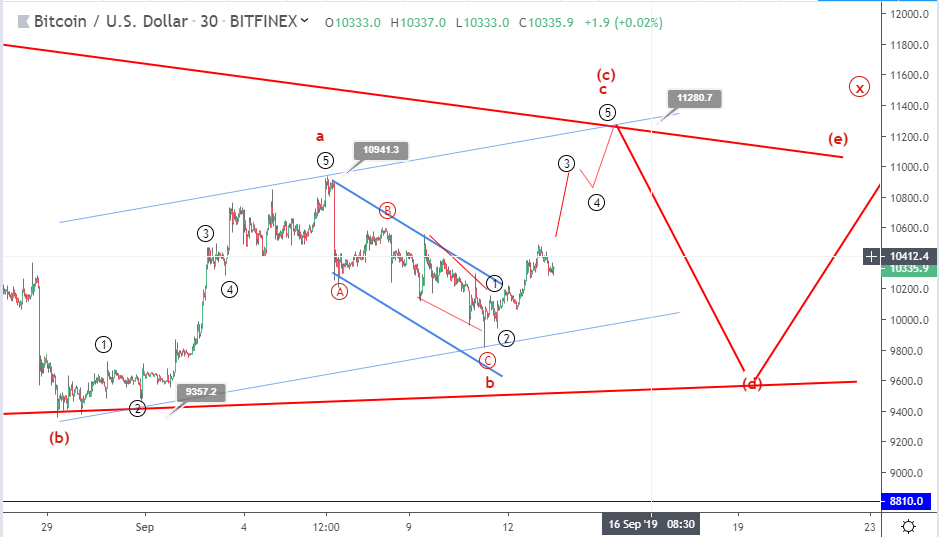