Bitcoin price volatility has slowed down in the last 48 hours. The following Bitcoin price prediction is based on the Elliott wave theory.

Bitcoin hash rate keeps on increasing despite the current bearish market. The hash rate could hit a record 100 EH/s before the year ends. This has probably helped the BTC price to maintain a moderate decline since late June unlike most of the top cryptos. Bitcoin dominance has again hit 70% with its $185 billion market capitalization according to Coinmarketcap.

The Bakkt Bitcoin futures will be launched on September 23 having acquired all the necessary facilities both legal and otherwise. It remains to be seen if this will cause a bullish spike next week. If the market reaction is upbeat, the resultant rally is expected to be limited below $12,300. If however, a breakout above $12,300 happens, BTC will be considered to have commenced the 2019 bullish trend toward the $19,800 all-time high. Chances are also there that the flagship cryptocurrency will remain sideways between $12,000-$9,100 range for few more weeks.

In the last update, we expected BTC price to climb to $11,200 and its neighbourhood in the short-term. The price is still pointing upside as the new chart below shows. 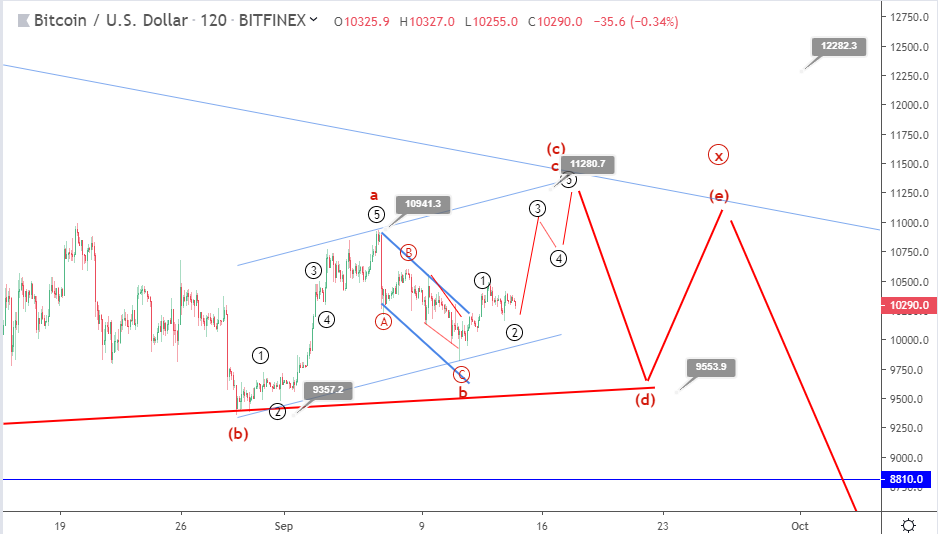 If BTC price moves as expected, it doesn’t mean it might not fall again to continue the triangle pattern with extremes at $12,300 and $9,100. If the price breaks out of any of these extremes, then it is expected to continue to $13,900 or $7,200 depending on the direction of the breakout.

Tags Bitcoin price prediction Cryptocurrency EURUSD Elliott wave analysis
Forex Crypto
Top 5 Forex Brokers
Top 5 Crypto Exchanges
Your subscription could not be saved. Please try again.
Thank you for subscribing. You will be the first to receive all the latest news, updates, and exclusive advice from the AtoZ Markets experts.
Everyone is reading
Is Forex Trading Halal or Haram in Islam?
Top 5 cryptocurrencies 2021 | Best Cryptocurrency To Invest
How to Setup Monero Mining in 2021?
close ×