Bitcoin was once again supported above $6100 following a rebound that almost hit $6500. Currently BTC has settled around $6400. Will price resume continue upside?

October 2018 | AtoZMarkets – BTC has gained nearly 1.5% in the last 24 hours according to CoinMarketCap. The same source recorded that BTC trade volume at $4.4 billion is very close to last week’s average. BTC market cap is a bit less than last week average. Price, however, has gained about 2% since the beginning of November.

Last week, BTC bearish continued downside. For almost two weeks, price stayed confined within $6350- $6400 range. From technical analysis perspective, price was expected to break below $6100 and hit a new year low. Bitcoin has somehow remained at equilibrium between market bullish and bearish forces. Since mid-August, price has remained above $6000-$5900 support zone. It was expected that if the bearish trend could break below this level, many bullish holders could drop their hold and price would dig deeper to $5000 and $4000. However, the longer price is held above this zone, the more probable a big bullish trend or correction up to $10,000 would start. Since the beginning of this month, BTC has gained about 2% way from the support zone which is a sign of relief. How long could this continue? 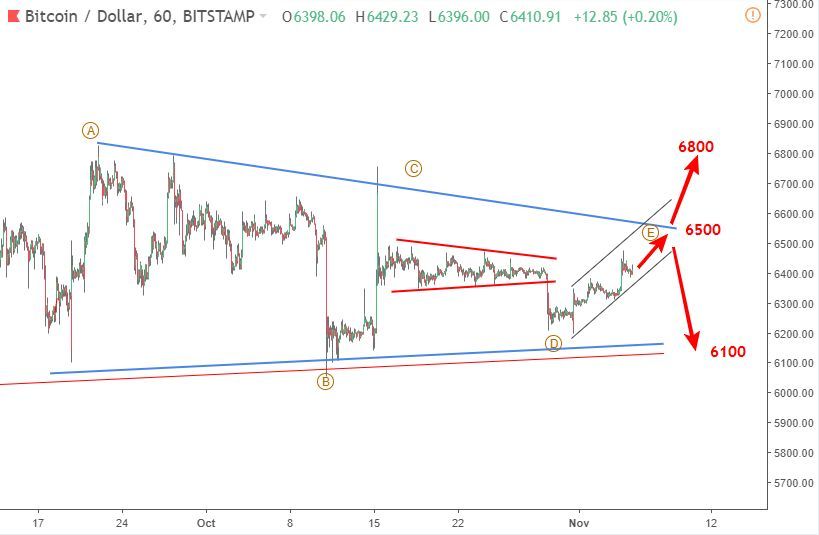 Since September, price is within a triangle pattern. The current push toward 6500 is probably the last leg to complete the triangle pattern. The direction of breakout is expected to be bearish. One thing that we have also learnt about Cryptos is that, price can break out of a triangle pattern upside or downside. A break above 6500 could test 6800. If price spikes above 6800, we would likely see it at 7000-10000. However, if price drops from 6500, a new retest of 6100 is very much likely. If it breaks fast below 6100-5900 support zone, the bearish pressure will be expected to drive it deeper to 5000 first and perhaps 4000 later.

Where do you think the breakout would be? Please share your thoughts in the comment box below.