Bitcoin is staying longer on the decline from $10,500. The following Bitcoin price prediction October 30 update is based on the Elliott wave theory.

October 30, 2019 | AtoZ Markets - The cryptocurrency market surprised many traders and investors last week. It surged massively and shatter many of the near resistance levels. In less than 24 hours, Bitcoin advanced to $10,500 from $7,750 shortly after hitting $7,300. The call for the bullish trend to resume is now very loud. Afterwards, Bitcoin dropped sharply from $10,500 to $8,800. The cryptocurrency has now stabilized, waiting for the next trigger to resume the 2019 bullish trend. Apparently, the surge could mean that the 4 months bearish correction from $13,900 has bottomed at $7,300. The bullish trend should thereafter resume and break above $13,900 2019 high toward the all-time high at $19,800. Whether this will be achieved before the end of this quarter depends largely on market volatility.

Bitcoin analysis: when will the bullish trend resume?

Technically, if we use the Fibonacci retracement tool, the current bearish correction should end between $8,900 and $8,500 which are the 50% and 61.8% retracement levels respectively. Also important is the price pattern that emerges. Usually, corrections are slower and take longer time to complete than trends. The current dip has taken four days already and might extend for one week if volatility does not resume. All things equal, the bullish trend should resume. Meanwhile, the entire market has maintained a valuation of $240-250 billion despite the current dips across the board. Furthermore, Bitcoin dominance remains almost unchanged this week - around 67.5%.

The bearish correction from $13,900 to $7,300 completed a double zigzag pattern at an important reversal zone. Often times a trigger is required to ascertain price's commitment to reversals around these zones. The big surge from $7,300 is enough of a trigger. In the last update, as the chart below shows, we started counting a bullish impulse wave recovery from the $7,300 low. 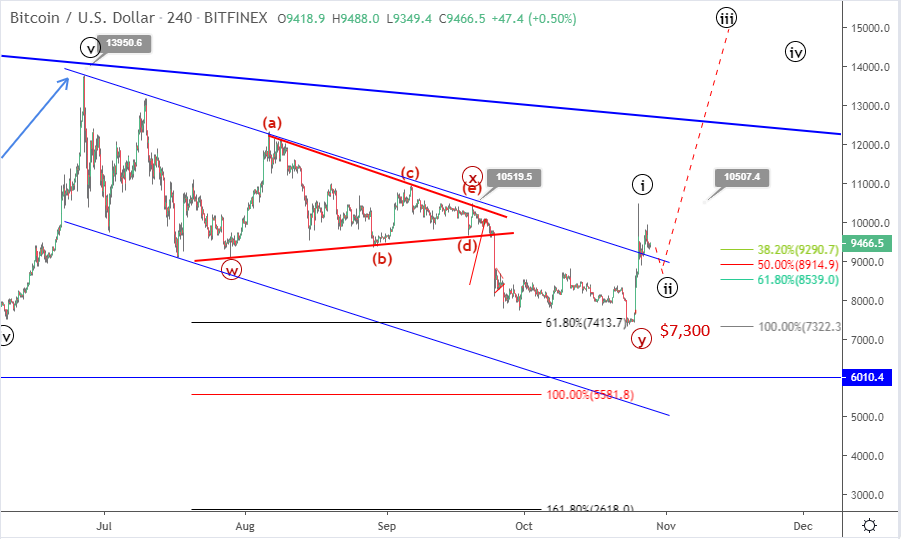 We didn't look at the corrective pattern at wave ii (circled) in the last update. However, we reckoned that once it's over, a bullish wave iii (circled) should push above $10,500 and $13,900 toward the all-time high. The Bitcoin price prediction October 30 chart below uses the lower time frame to take a close look at wave ii (circled). 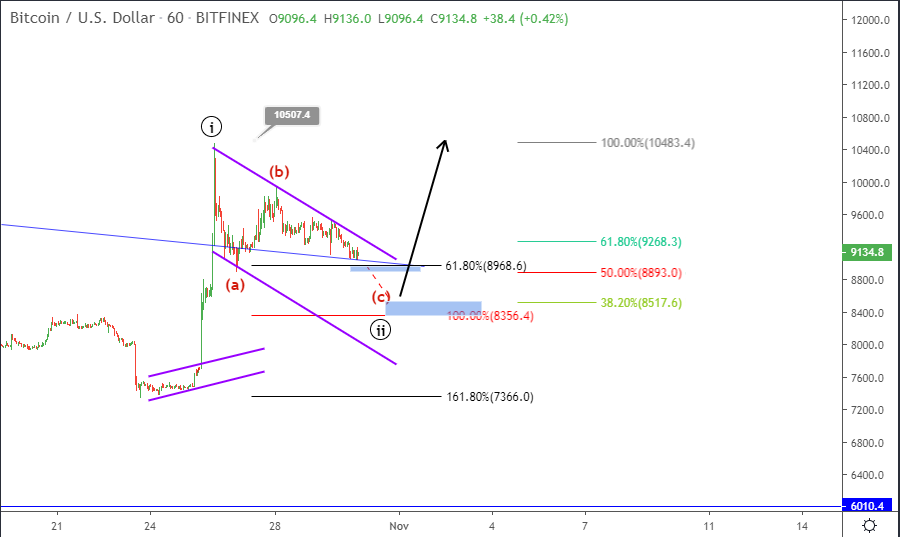 Wave ii is gradually completing a zigzag corrective pattern. Wave (c) could shoot below $8,910 wave (a) low toward $8,350-8,510 where we have a strong support and reversal zone waiting to support it. If the price afterwards breaks above the channel, that is the confirmation for wave iii (circled).