Bitcoin is heading back to $6200 after a bearish breakout today. Is BTCUSD heading to $6000 and even below? 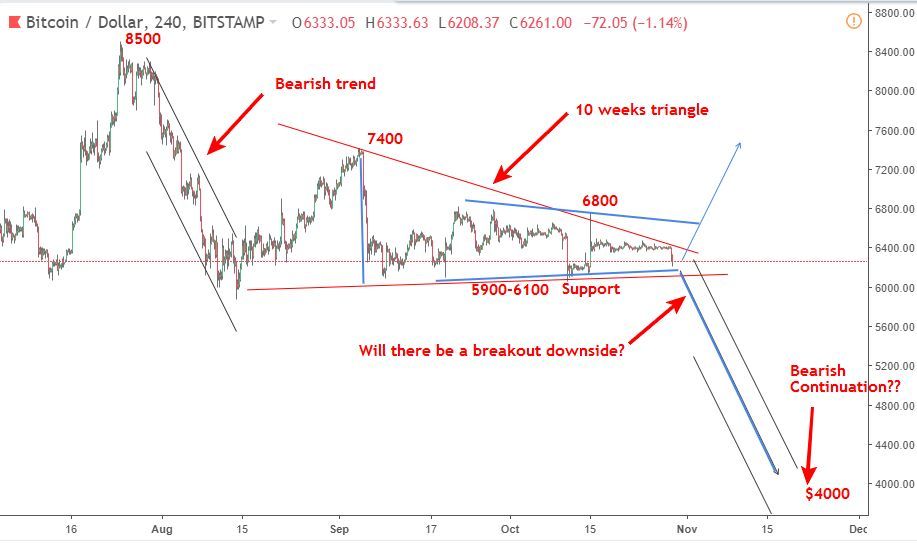 The chart above shows the bigger 10 weeks triangle pattern which started late July after price dropped from 8500 to 5900 (the lowest this year). For about ten weeks the bullish and bearish momentum are at equilibrium. One thing is clear though – the rallies (bounces) took time to complete while the dips happened very fast. This probably shows the bears are still control and the bulls are only buying time. How long will the bulls hold price above $5900 support. Looking inside the 10-weeks triangle, there is a smaller triangle shown in blue. Look at how fast price dropped from 7400. Since that drop BTC has stayed within 6800 and 6000 range. A breakout below 5900 will eventually happen and the resultant dip might continue to 4000. Price showed a bit of that today with a fast dip to 6200. After the upsurge to 6800 mid-October, price has continued in another triangle range for almost 2 weeks. The chart below shows the recent 2-weeks triangle range. 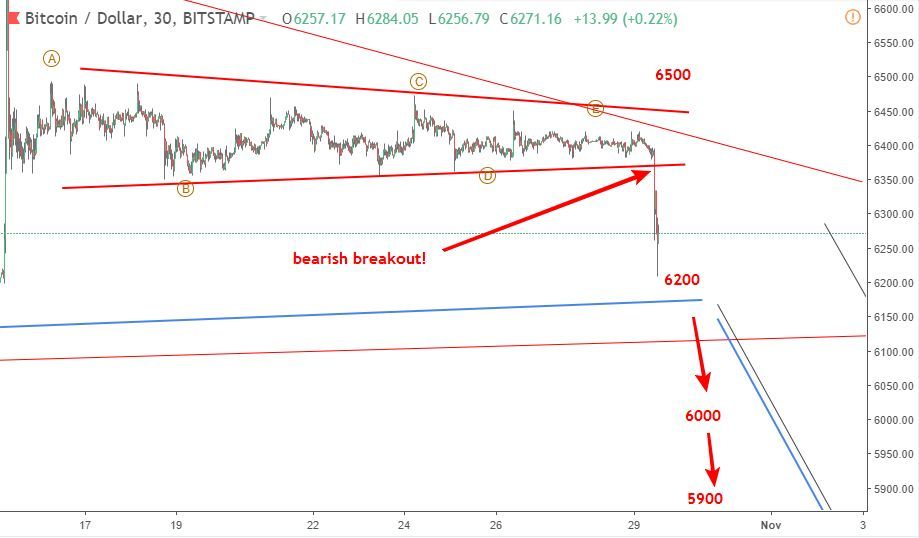 Price has broken below the 2-weeks triangle pattern and quickly hit 6200 today. This might be the early sign of a big bearish breakout. Below 6200, there is 6000 and 5900 where the bulls would like to push again. Technically, Bitcoin is still bearish with potential target at 4000. Unless a fast bullish spike happens above 6500, the bulls might loose this time around.

Where do you think the breakout will happen? Please share with us in the comment box below.

Bitcoin Could Crash El Salvador’s Economy, Veteran Economist Warns
Forex Crypto
Top 5 Forex Brokers
Top 5 Crypto Exchanges
Your subscription could not be saved. Please try again.
Thank you for subscribing. You will be the first to receive all the latest news, updates, and exclusive advice from the AtoZ Markets experts.
Everyone is reading
SEC Lawsuit Against Ripple May Drag On Until 2022
Ethereum Facing Support Around $2,300 Price Area - Will Strike Upward?
Will the Prices of Gold and Silver Rise After FED Meeting?
close ×