Has Bitcoin price already bottomed? Will the price continue upside for a new all-time high? Let’s look at some experts’ review.

April 22, 2019. AtoZ Markets – Bitcoin has gained over 27% in April, contributing to the near 70% rally since the last bottom at 3100 in December 2018. The optimism is back and some analysts believe the price has already bottomed from the look of some technical and fundamental parameters. Despite the 2019 upsurge, some analysts have also looked at the bearish possibilities and expected the price to make a fresh low before it finally takes off.

There have been mixed opinions regarding Bitcoin. The bull-bear Bitcoin debate seems to not ending yet. One of the most prominent Bitcoin traders and analysts Tone Vays recently conducted a debate session that lasted for over 5 hours. Tone gathered top analysts and traders to debate on the topic ‘has Bitcoin bottomed?’. Some of the analysts who participated included Willy Woo, David Puell, Murad Mahudov, Tuur Demeester, Venzen Khaosan and Tyler Jenks.

Bitcoin analysis: is the bottom in?

The debate started with Willy Woo who applied his popular NVT ratio analysis. He suggested that the price had already bottomed. Late last year, he predicted a bottom of around 4600 before the next bullish phase. However, the price dropped 1500 lower anh has now picked up. In addition, David Puell was in agreement with Woo. He believed the market is in the accumulation stage for the next bullish run. These two analysts believed any dip that might happen should be limited above $4300.

Murah Mahudov based his analysis on the comparison between the actual market price and the realized market price. He represented these two on the graph as shown below.

David Puell added his own view. He said ”Not getting the chance to buy Bitcoin cheap is punishment enough for more people. (There is a) very high likelihood that we will see $4000 very neat bull trap out of this high or 6000. I don’t think we are going to see another lows”

The co-founder at Adamant Capital Tuur Demeester was also part of the debate. He extracted some information from his firm’s recent report. He believed that capitulation has already happened. According to their findings, miners who mine at a cost of 5 cents KWh or below are still recording profits. He added that though Bitcoin would never go below 3000, the altcoins are not safe yet. He rated this possibility at 80%.

The other side: bottom call too early?

Despite the current bullish run, some of the debaters believed it might just be too early to call for a price bottom. Venzen Khaosan applied the principle of Elliott wave theory. 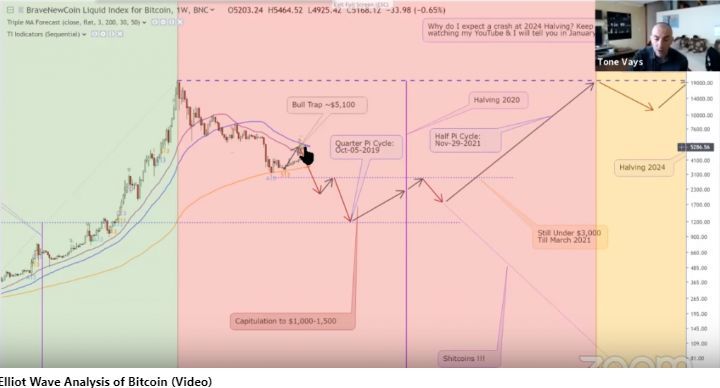 He expected that two more bearish legs should be expected which could last for another one year. Another Bitcoin-bear, Tyler Jenks believed the crypto market is going through tough times. Though he expects Bitcoin future price to hit $5 million or $10 million but ‘just not yet’.

Meanwhile Bitcoin remains above $5300 and getting close to $5500 high. The next bullish target is set at $6000 but price could do even better. However, a dip to 4700 could happen before the next big break to the upside.

Which of these forecasts do you agree with? Please share your thoughts with us in the comment box below.

Coinbase Tries to Stay Strong Despite Words from Raymond James
Forex Crypto
Top 5 Forex Brokers
Top 5 Crypto Exchanges
Your subscription could not be saved. Please try again.
Thank you for subscribing. You will be the first to receive all the latest news, updates, and exclusive advice from the AtoZ Markets experts.
Everyone is reading
SEC Threatens Court with Far-Reaching Consequences If They Lose Ripple Lawsuit
Ripple Lawyers Object SEC’s Request to Extend Discovery Deadline
Why You Should Start Forex Trading With FXVC?
close ×