Bitcoin hit above $5000 for the first time since over 4 months, recovering from $3100 bottom. Is the crypto winter over? Here are opinions of popular crypto market analysts.

April 08, 2019. AtoZ Markets – The cryptocurrency market is getting the biggest attention in 2019 so far. The reason is there to see. Prices of cryptos are skyrocketing in ways that many did not expect two weeks ago. Bitcoin hit above $5,000 for the first time since the November bearish breakout. From the $3,100 low in December, BTC has gained over 65%. In April so far, BTC has gained over 25% to hit $5,300 and currently consolidating around $5,200. This kind of move will definitely come with divided opinions on the internet.

There are some who believe the crypto has already bottomed at $3100 and the next bullish phase was confirmed by the current volatile rally. The second group believe the rally was too fast and price activities might be followed by an equally high volatile dip below 3,100 or at least a sharp corrective dip toward 4,000.

Bitcoin rally: what is the next target?

A good number of crypto analysts have joined the bull bandwagon after the April breakout. One of the ever-persistent crypto bulls, Thomas Lee, said that Bitcoin is back in the bullish trend. The Fundstrat Global Advisors co-founder said this during an interview with Bloomberg on April 5. He said the crypto has to return completely upside after breaking its 200-day-moving-average. He added that there are chances that some of the crypto whales (huge investors) who sold early 2018 are starting to come back in. Lee once predicted that Bitcoin’s next bullish phase would see it at a whopping $250,000.

Another popular crypto analyst who uses technical chart patterns, Peter Brandt, also predicted that a new bullish parabolic phase is on the way. The technical analysis veteran tweeted with the chart below: 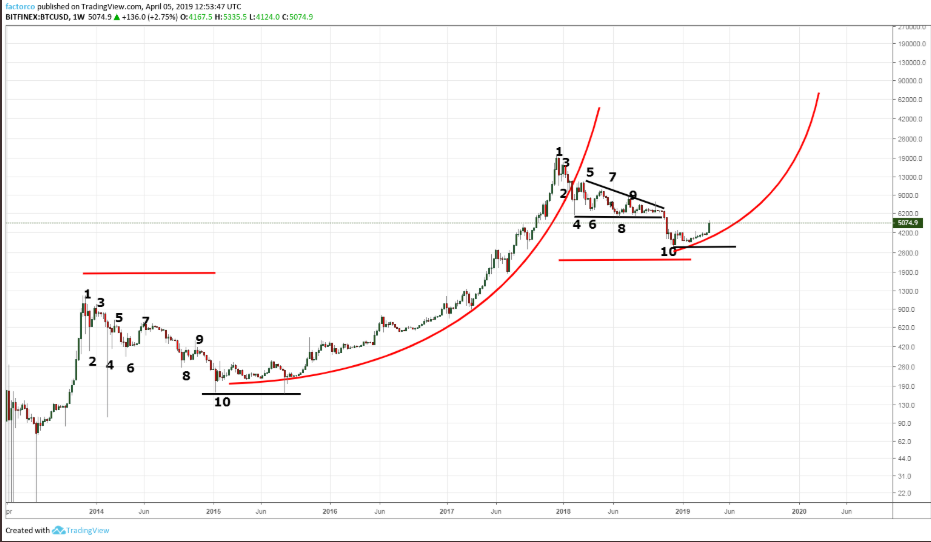 If we could deduce from Peter’s chart, the bullish rally would go in the excess of $200,000 just as Tom Lee predicted. While these are logical, they also look a bit long term – perhaps 2 to 5 years. Despite the very good run so far, the price is still below the 5700-6000 resistance zone. Some profit may be taken around this zone especially if a fast break does not happen. However, a break into this zone would set the next targets at 7500-8500 zone.

Despite the current positivity in the market, there are perceptions that price might be at an overbought zone and close to another crash. According to Bloomberg Intelligence analyst Mike McGlone, in an article published on 5th April, Bitcoin is at its most overbought level since its December 2017 $19,800 all-time high. The analyst used Bitcoin’s Global Strenght Indicator (GTI) which shows BTC’s overbought and oversold price levels. He suspects the current move to be a ‘massive bubble” and there might be sellers looking for the right price to cash out. 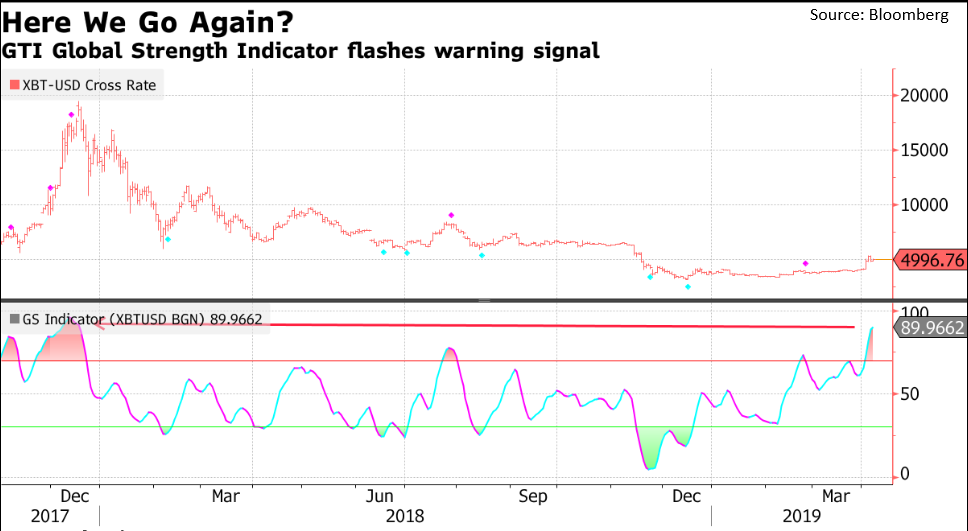 According to the indicator, the price is currently at its most overbought level since the all-time high. This is a warning signal and appears that another leg downside is possible.

What is next for Bitcoin and cryptos?

It’s looking like a difficult call. Prices continue to surge but this is not the first time such happened since the bearish phase started in December 2017/January 2018. The crypto bulls have also been unable to provide adequate fundamental reasons for the current rallies. Huge spikes and volatility usually scare huge investors. A simple gradual rally would be more appealing to them. Besides, the market is still not widely adopted though there are few cases reported this year so far. As the president of crypto hedge fund, Prochain Capital David Tawil said, ‘it could easily be easy come, easy go”.

What’s your opinion about Bitcoin and cryptos? Do you think the next bullish phase has started?