Bitcoin stabilizes above 5200 just below an important resistance zone. Will Bitcoin rally continue with a break above the zone?

April 10, 2019. AtoZ Markets – After hitting its highest price since November, Bitcoin is now stabilizing around 5300. There is still a long way to go before full recovery. However, the near 70% gain since December is good for the market. As the rally continues after the 4000 April 2 breakout, the presence of 5800-6100 resistance zone is very hard to ignore. This could be another battleground between the bulls and the bears and there are concerns of a renewed sell-off or sharp dip that might follow.

Fundamental analysts have, over the last few days, questioned the manner of the April 2 surge. The big move had no fundamental backing but Bitcoin has been able to sustain the recovery anyways. Price is still significantly below the support zone and we will have to see what happens from here.

Since price hit 5350 on Monday, it has dropped and moved back and forth below 5350 and above 5125. Earlier today, price rallied from 5185 to 5289 before dropping to the current price of 5250. If the price stays within this range longer, a triangle pattern will complete which could be followed by a bullish breakout. 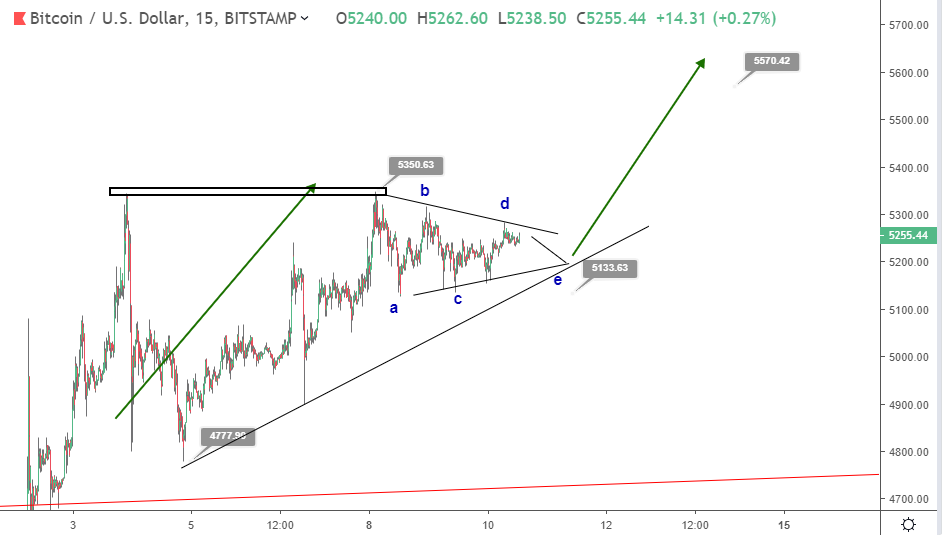 After the April 2 push, Bitcoin maintained further rallies to 5350 but a fast dip followed to 4777 on April 4-5. Price has, however, recovered quickly to retest 5300 on Monday. A breakout was resisted and the price has gone sideways, painting a clear sideways triangle pattern. Triangle pattern is one of the most effective patterns on the cryptos price charts. It signifies a period of silence, adjustment, indecision or balance before the asset resolves on which direction it goes next. Often times, the breakout happens in the direction of the immediate trend before the triangle.

Meanwhile, the scenario here is bullish. Price could make another dip toward 5133 before breaking upside. If the breakout happens, a surge above 5350 high is very much likely. The next target is $5500-5600, close to the 5800-6100 resistance zone. A less likely bearish breakout is expected to be limited above 4800.

Dogecoin Crashes and Bitcoin Market Awaits Fed's Meeting
Forex Crypto
Top 5 Forex Brokers
Top 5 Crypto Exchanges
Your subscription could not be saved. Please try again.
Thank you for subscribing. You will be the first to receive all the latest news, updates, and exclusive advice from the AtoZ Markets experts.
Everyone is reading
The Legal Battle Between the SEC and Ripple Continues
Binance Cancels Cryptocurrency Trading in Australia
Cryptocurrency Market-Experts Make New Predictions
close ×