Bitcoin dropped below $10,000 on Tuesday. The following technical analysis is based on the Elliott wave theory.

The cryptocurrency market has continued the second week of September bearish after losing $8 billion in the last few days. Bitcoin maintains 69% of the market dominance with $180.41 billion out of the market's total of $259.25 billion. In addition, the flagship cryptocurrency has shed over 2% (at the time of writing) in the last 24 hours and is currently priced at $10,025.

For over seven weeks, Bitcoin remains within the $9,000-$12,000 range. However, the range is getting smaller and it's just a matter of when the big breakout will happen. In addition, the direction of the breakout is a major concern as the bulls see a bullish trend preceding a sideways range while the bears see a smaller range following the $13,950-to-$9,100 price slump that happened between late June and mid-July.

The bears have almost recovered almost all of the September earlier bullish advantage. The bulls pushed to $10,950 to lead a 13.5% gain from $9,600. Four days after, BTC has slumped to $9,950. However, if the price will continue the range-bound move, we will expect the current dip to be limited above $9,500. BTC might continue in this range for one more week or throughout September before breaking out.

Bitcoin keeps making lower resistance levels. However, the support levels are very close thereby looking more likely to face more pressure. The major support zone remains at $9,100-$9,350. A break below this zone will lead to further fall toward the $7,000-7,200 bearish target. On the other hand, the nearest resistance levels are at $12,300, $13,200 and $13,900. It will require a far stronger bullish force to break these levels.

In the last update, we had the two most likely scenarios from Elliott wave perspective. The first scenario considers the entire dip from 13,950 as a triangle pattern. A bullish breakout should happen afterwards above the all-time high. This will require a lot more from the bulls than the second scenario requires from the bears. The second scenario expects a deeper bearish correction toward $7,200 before the larger bullish trend resumes. If the latter plays out, then Bitcoin bulls will have to hold on for more weeks or even a few months. The chart below focuses on the second scenario. 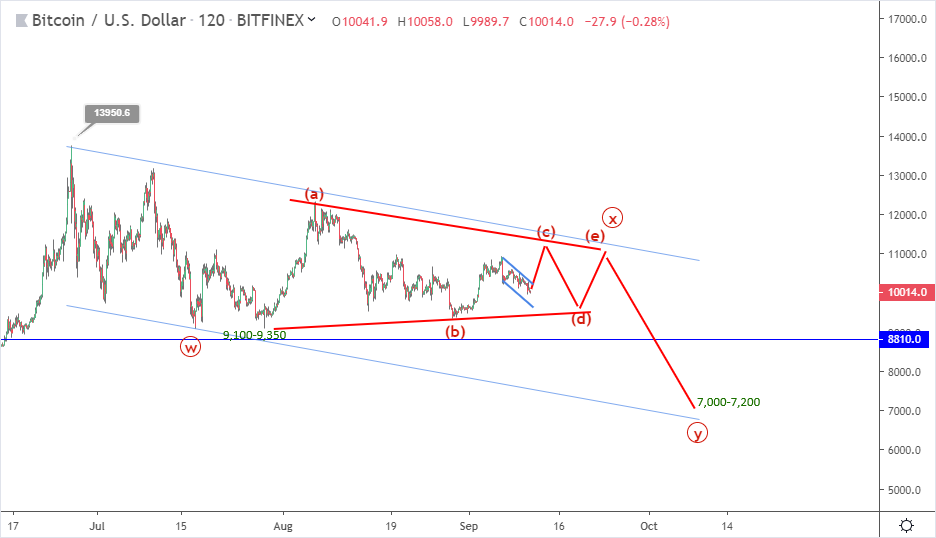 The current sideways price moves could continue for one or two more weeks before a breakout. Technically, a bearish breakout looks more likely and this scenario should play out unless a break above $12,300 resistance level happens instead. On a short-term, the current dip should be supported above $9,500 and the price should rally back above $10,950 in the coming days.