Bitcoin hits above $11,000 during the weekend. However, the price has been turned down after the second attempt to stay above was well resisted.

June 24, 2019 | AtoZ Markets – BTC is currently retreating below $11,000 after a massive bullish breakout that saw price advanced above it. The kind of bullish trend seen since December 2018 would remind the crypto bulls about the 2017 surges that led to the all-time high. The first half of the year is ending with BTC gaining over 200% and over 250% since December 2018. After losing about 15% in the first week of June, the month is ending on the positive with over 30% gain. Bitcoin has historically performed better in June and this is proving to be no different. Yesterday, the price was about $150 away from hitting the 50% retracement of the bearish run that started in December 2017 and ended in December 2018.

Over the weekend, the entire market gained about $30 billion to now stand at $327 billion in capitalization. Bitcoin at $193 billion has increased its market dominance by 2% to hit 59%. In June so far, Bitcoin has outperformed the aggregate of the altcoins. This is becoming the norm in 2019. Bitcoin moves and outperforms the altcoins. Afterwards, the altcoins catch up. The BTC market dominance has fluctuated between 57% and 59% in 2019 so far. If this trend would continue, the altcoins will outperform BTC in the coming days or weeks. Currently, the BTC price is slowing down at prices just under $11,000.

After completing a shallow 4th wave at 7,400 in the first week of June, a bullish 5th wave run has followed. At $10,000, a bearish retracement was suspected as explained in the last update. However, the price surged above it quickly. The chart below shows how the 5th wave is progressing. 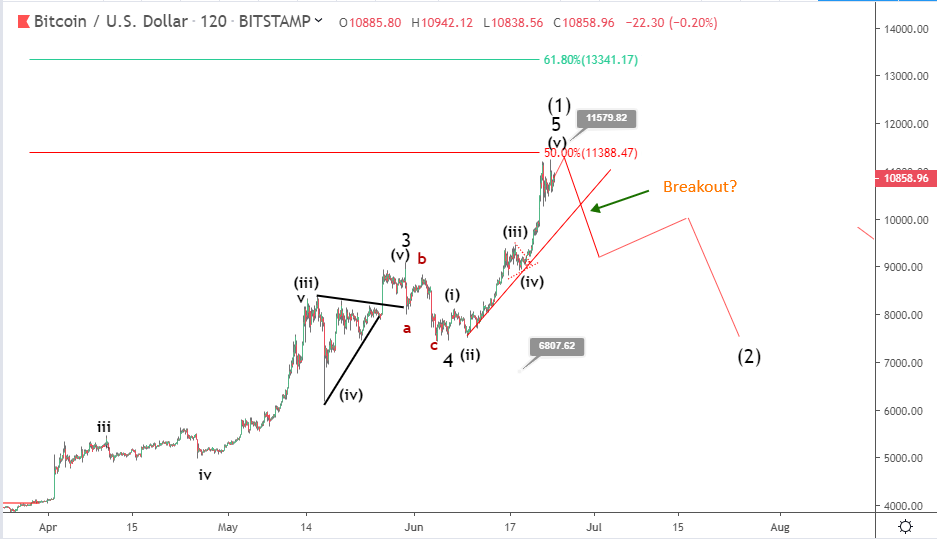 Wave (1) is in the 5th wave. The 3rd wave was very extended therefore the 5th wave might not proceed above the $11,400 critical level. Further rallies to $13,400 is possible especially if the 5th wave rising trendline is not broken downwards. A break below the trendline could lead to the start of wave (2) retracement to $7,000.

Read About the New Volatility Index of Cryptocurrencies

Ripple Found Support Around $0.62 Price Area - Will Recover Upside?
Forex Crypto
Top 5 Forex Brokers
Top 5 Crypto Exchanges
Your subscription could not be saved. Please try again.
Thank you for subscribing. You will be the first to receive all the latest news, updates, and exclusive advice from the AtoZ Markets experts.
Everyone is reading
Is Forex Trading Illegal in India? Can Indians Trade Forex Legally?
Top 10 Forex Pairs to Trade and NEVER Trade!
XRP Skyrockets After Ripple’s ODL Announcement
close ×