Bitcoin hits its highest price since the November bearish breakout. What should we expect from this digital asset from a technical analysis perspective?

May 06, 2019 | AtoZ Markets – BTCUSD climbed to $5900 and hit its highest price in 2019. The crypto market has maintained a positive run this year as the first quarter closed positively with over $50 billion added to the entire market capitalization. This is exactly the kind of moves expected to lead to the complete market recovery. It is not widely expected that new all-time highs will be seen in 2019 however major recoveries are expected among the major cryptos.

The flagship cryptocurrency has come back strong in 2019 and has been on an upward trajectory. Price is currently very close to the pre-November 2019 bearish breakout. Many will still recall the sideways triangle pattern that started in March 2018 and lasted till September. Just when BTC was expected to break below 5900-6000 in early September, it went sideways to complete a smaller and narrower triangle pattern. On 14th November, price broke below the minor and major triangles to hit 3100 in December. However, since the low, BTC has gained 85%. It is expected that at 5900-6100, BTC could be resisted temporarily from advancing further. There will be minor and major dips as the new bullish trend continues. It should also be noted that BTC price is advancing into a chart price pattern that’s very familiar.

Bitcoin price is advancing from 3100 and developing into a bullish impulse wave. This is very much in support of the claim by the crypto bulls that BTC price has already bottomed. While that is very hard to know, one thing is more probable – the current bullish run will continue to $8500 – $10000. In the last update where we used the chart below, Bitcoin was in the 3rd wave which means further rallies will happen before a major bearish correction. 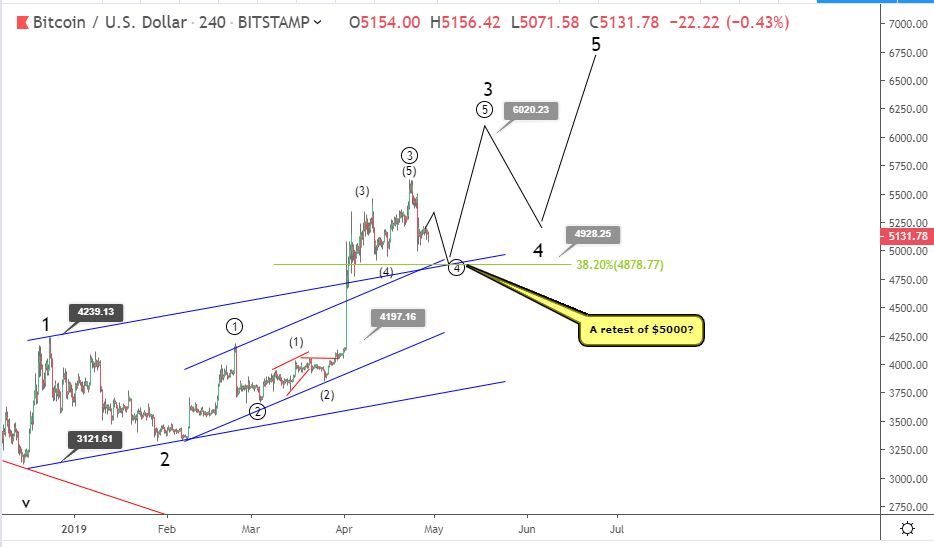 After the $5000 retest, price advanced as expected to complete the final leg of the 3rd wave. However, the rally has a lower momentum than expected and the price seems to be painting a slightly different picture as the chart below shows. 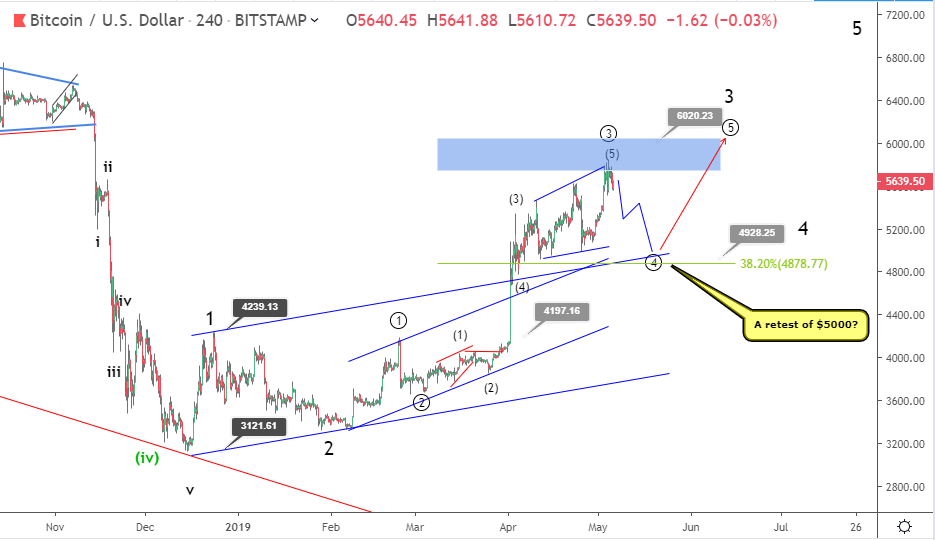 It seems the rally to 5800 just completed the 3rd sub-wave of wave 3 with an expanding diagonal pattern. The 4th sub-wave dip should follow to re-test 5000 before price advances further. If this impulse wave ends as expected, the price will have thrust into the September-November 2018 triangle between 6100 and 6800. A big 3-wave dip could then follow afterwards.