Bitcoin is rangebound just below 9,300 as the bullish trend mounts further. The following technical analysis is based on the Elliott wave theory.

June 19, 2019 | AtoZ Markets – At the time of this report, Bitcoin exchanges for $9,075. The premier cryptocurrency was on top of the gainers’ table in the last two weeks as it rallied above the 9,100 previous high. However, it seems the bullish momentum has slowed down into a sideways price pattern. Trading activity and volatility have dropped so far this week and the bulls will have to push further to the 10,000 mark to avoid a retest of the 8,100 minor support.

However, to the downside, there could be a retest of the 8,100 minor support if price fails to break above 9,100 sufficiently. It currently hovers around it in a sort of triangle pattern. The next support level is 7,500. We will most probably see a hit of the 10,000 handle level before 7,500.

A bullish impulse wave is emerging from the 3,100. From 3,100, Bitcoin has gained about 200%. The impulse wave completed the 4th wave at 7,400 albeit shallow. In the last update, we expected the 5th wave to hit at least $10,000 before the 2nd wave starts. The chart below was used in the last update. 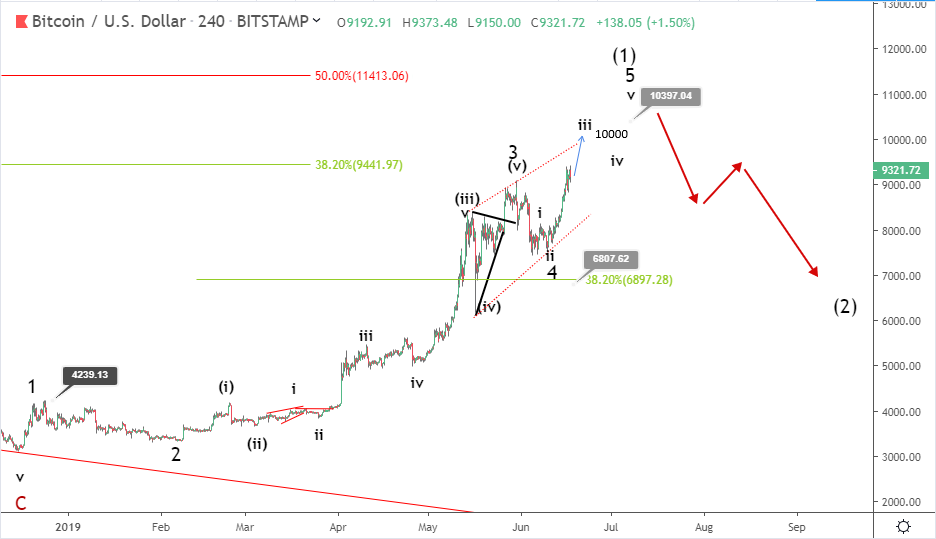 A wedge/ending diagonal was also spotted. It suggests that a strong bearish correction could start from $10,000. However, if that holds, the 5th wave of wave (1) will be too small and the whole move could be part of the wave 3 of (1) instead of the 5th wave. That would indicate that wave (1) will go higher than 11,500-12,000 second target zone. We will have to leave the subjectivity for now and focus on what looks more clearer. The chart below shows the current rally from the end of wave 4 at 7,400. The current sideways move is completing a triangle 4th wave of the rally from 7,400. Further rallies are expected once price breaks above the triangle. Next bullish target is $10,000 or prices slightly below or above it. The reaction at the end will determine what next to look forward to.