Bitcoin has returned above $10,000 after finding support at $9,300. The following looks at what could happen next based on the Elliott wave theory.

September 03, 2019 | AtoZ Markets – After over 72 hours of consolidation above $9,300, Bitcoin spiked to $10,400 on Wednesday. The flagship cryptocurrency was supported at The 9,300-9,500 zone for the third time since July 16. BTC is now close to the $11,000-11,100 resistance zone. Despite the current surge, BTC is still within the bearish territory and the possibilities of further dips are still high. However, if a big spike does happen to shatter $12,300, we will have to completely admit that the bull is back.

The surge was seen across the board with Ethereum hitting 180 and Ripple touching 27 cents. The entire market has therefore added over $20 billion in less than 48 hours. Meanwhile, Bitcoin has increased its market dominance to 70%.

Many have argued that the recent interests of institutional investors to participate in the market will trigger the next round of the bullish trend that was seen in the first half of 2019. At the current price, Bitcoin investors that started at the start of 2019 will be up by 200% despite the dip from $13,900. Bitcoin thus has done better than most monetary assets.

Bakkt will launch its BTC Futures on September 23. The company announced that it will start accepting deposits on September 6 to its BTC warehouse. Meanwhile, it remains to be seen how the launch will affect Bitcoin. Many analysts are uncertain of the potential effect on BTC price.

From the Elliott wave perspective, the bearish correction from $13,900 is getting more complex. A break below $9,300 was expected as the price complete a double zigzag pattern. The chart below was used in the last update. 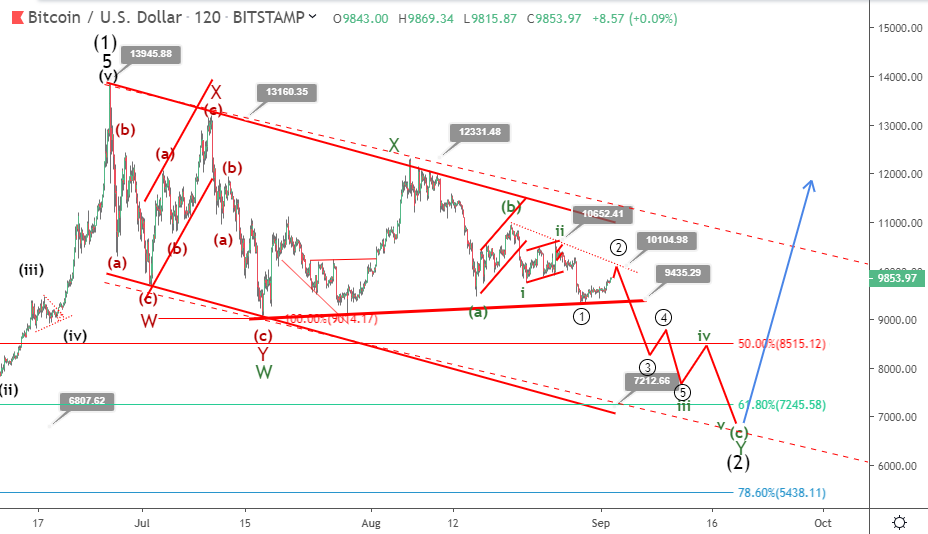 We expected that ”the current bounce might proceed to $10,100 before the bear force another sell-off”. However, the price has continued to $10,400. If it advances significantly above $11,000, the bullish trend could resume. On the other hand, the possibility of a triangle pattern from $13,900 to $9,100, as the chart below shows, is also very much likely. 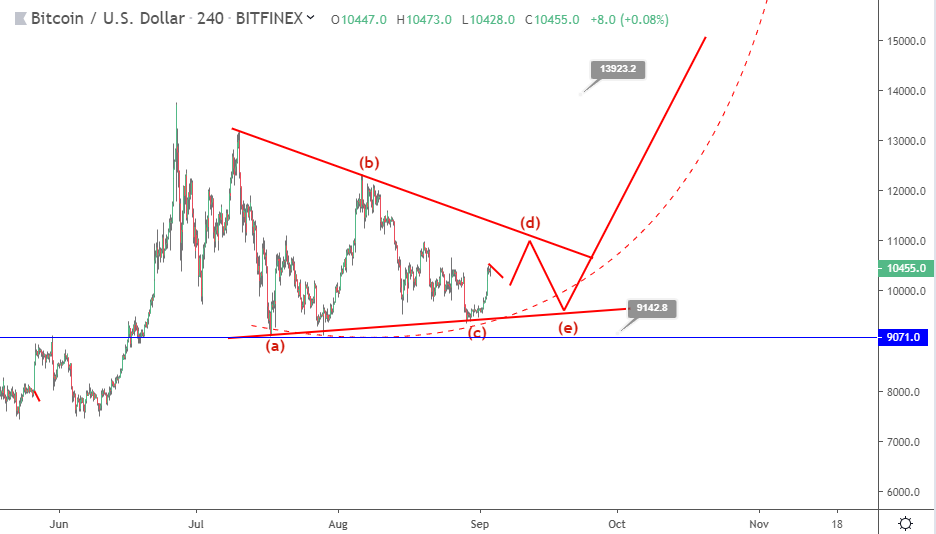 There are two more legs to complete this pattern. From experience, Bitcoin and other cryptos don’t often complete the last leg of the triangle and sometimes complete a shallow wave (e). However, this forecast supports a bullish breakout toward $19,800 all-time high. On the other hand, if BTC does not complete the pattern and instead break below the $9,100-9,300 support zone, the sell-off will be expected to continue to $7,200.

Tags Bitcoin price prediction Cryptocurrency Elliott wave analysis
Forex Crypto
Top 5 Forex Brokers
Top 5 Crypto Exchanges
Your subscription could not be saved. Please try again.
Thank you for subscribing. You will be the first to receive all the latest news, updates, and exclusive advice from the AtoZ Markets experts.
Everyone is reading
Is Forex Trading Halal or Haram in Islam?
Top 5 Forex MT5 Indicators for 2021 you should try
Top 5 cryptocurrencies 2021 | Best Cryptocurrency To Invest
close ×