Optimism of a bullish recovery is getting weak again after Monday's BTC loss. The bearish move saw BTC lose 3% in less than 2 hours. Prior to the move, price was in a 2-weeks range (a triangle pattern). Triangles are familiar patterns among Crypto enthusiasts who get market clues from technical analysis. After the breakout, price is emerging into an intraday bearish impulse wave before it entered into another range-move since Monday. The current 3-day sideways move is also emerging into a triangle pattern – the 4th wave of Monday's 'impulsive' bearish move.

According to CoinMarketCap, BTC market capitalization in the last 24 hours stays at $109.9 billion which is significantly lower that last week's average of $112.5 billion. However, trade volume of $3.78 billion is within last week's average.

In the last update, we looked at why BTC might soon break below major supports that have been holding back the bearish trend for a long time. A smaller triangle pattern was broken downside on Monday. The result of this might see price testing $6100 support and the untouched $5900. It is generally assumed by many that once these levels are out, price will be on the way to $5000 or lower. The chart below shows how price could behave in the coming days from Elliott wave theory perspective. 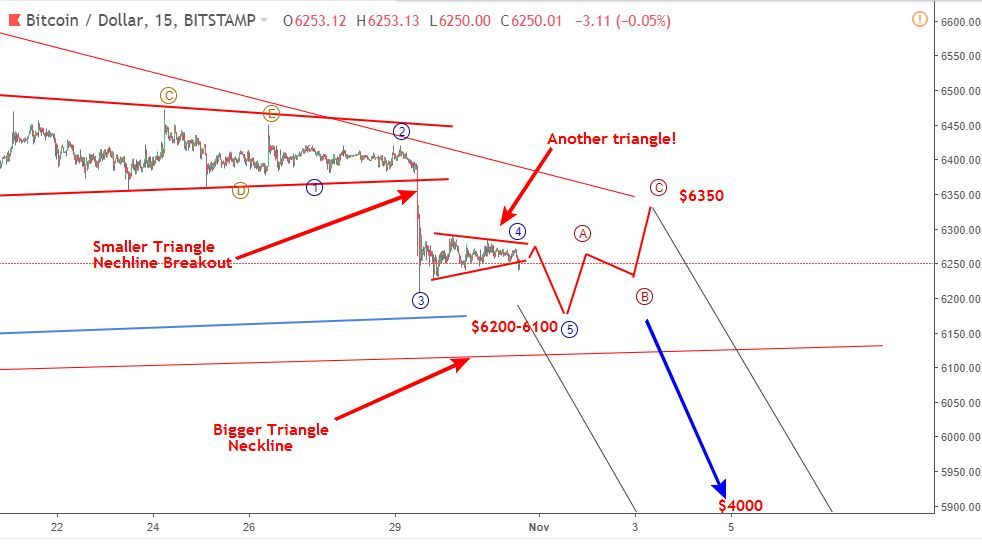 From the smaller triangle breakout, price is emerging into a bearish impulse wave with a 4th wave triangle pattern. A break below wave 4 triangle will lost likely see price drop below, to re-test 6100 support (larger triangle support base) and complete the impulse wave. Price might first be rejected at 6200-6100 and bounce off to test the larger triangle resistance lone at 6300-6350 before crashing below $6100 and further off to $4000. Unless a fast bullish breakout happens above 6400-6500, the bears will eventually win and drive price far lower than the current year low.

Crypto Traders Lost $1 Billion As China Cracks Down on Bitcoin

Up or Down? Analysts Disagree on Where Bitcoin Will Go
Forex Crypto
Top 5 Forex Brokers
Top 5 Crypto Exchanges
Your subscription could not be saved. Please try again.
Thank you for subscribing. You will be the first to receive all the latest news, updates, and exclusive advice from the AtoZ Markets experts.
Everyone is reading
SEC Lawsuit Against Ripple May Drag On Until 2022
Ethereum Facing Support Around $2,300 Price Area - Will Strike Upward?
Danske Bank Rejects Cryptocurrency Trading
close ×