Bitcoin completed a triangle pattern at $6500 and price has dropped to $6300 in a quick response. Will there be a bearish move to $6000 soon?

The Cryptocurrency market couldn’t build on early November profits as prices dropped back. As soon as last month ended, Bitcoin gained about $300 to push upside. The market has lost half of this gain so far as the bulls lack momentum to break away from this bearish zone. It’s believed that unless price breaks away from the bearish zone, it might eventually break downside to make a new year low. Since price dropped to $5900 early this year, it has bounced off it more than three times. The bounces on the other hand are getting smaller as price range gets narrower to complete a triangle pattern. If price breaks below the current bearish zone, it might hit $5000 or $4000 in no time.

According to data from CoinMarketCap, today’s BTC trade volume is $4 billion which is about last week average. The market cap stays at $111 billion, within last week range. Market opened this week below $6400 and is currently within $6250 and $6400 range. Last week rally to $6500 might have completed a triangle pattern as discussed in the last update. It’s only a matter of time before a market shattering breakout happens. 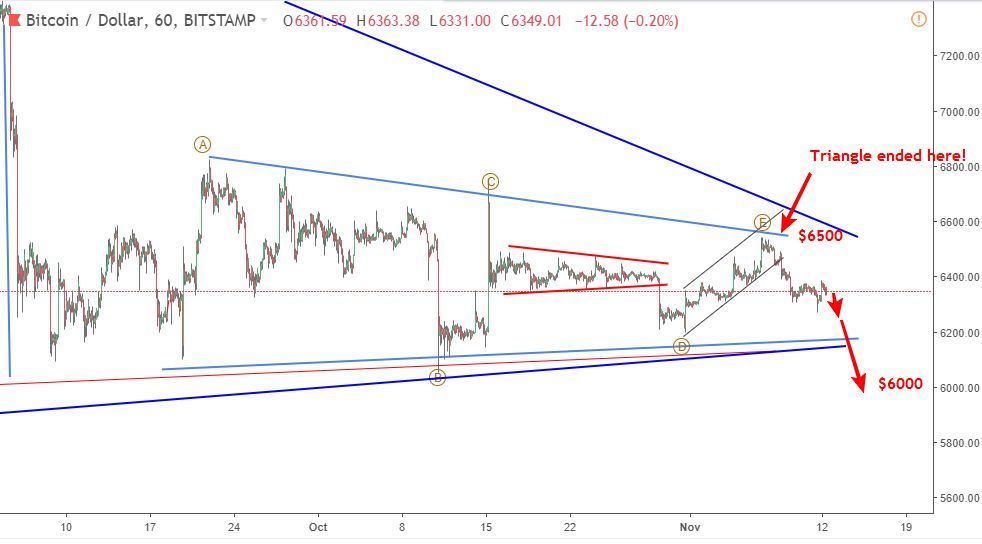 The chart above shows a complete triangle pattern at $6500 with five sub-waves – a typical Elliott wave triangle pattern. Going by this, price is expected to falter to $6000 at least. A break below $6000 might finally set the bears free and lead to a new yearly low. Bearish targets remain at $5000 or below. The possibility of a bullish breakout shouldn’t be ignored. Though price is expected to break downside in the direction of the immediate bearish trend before the triangle, but some cases in recent times have shown otherwise.