Bitcoin returned downside after a slight move above 8,000. Where is the next bearish target before the recovery continues?

June 10, 2019 | AtoZ Markets – The cryptocurrency market is looking buoyant again after crossing about a quarter of a trillion dollars in 2019. April and May were particularly bullish as Bitcoin and the major altcoins recover over 30% of the 2018 bearish trend. There is very little doubt, at the moment, that the market is bullish and the bearish trend bottomed in December 2018. The buy volumes are significantly higher than the sell volumes. If the bullish trend continues throughout 2019, Bitcoin should challenge resistance prices toward the all-time high.

Meanwhile, despite the bullish trend, it is expected that there will be small and big dips in-between the bullish price cycles from the smaller time frames to the bigger ones. Therefore, the current dip was very much expected and after rejecting to stay above 8,000, we might see 7,000 is the short term. June was expected to start bearish for Bitcoin. However, Bitcoin could still record a net bullish month if it makes quick recoveries to make a new 2019 high. The crypto market capitalization has now dropped to $245 billion this month, losing $35 billion so far in June.

From the perspective of Elliott wave theory, Bitcoin is developing into a bullish impulse wave from the 3100 low. The current dip was labelled as the 4th wave and could continue to 7,000 which is the 38.2% Fibonacci retracement of the 3rd wave. In the last update, we had two scenarios – a shallow simple zigzag ending around 7,500 or a complex zigzag ending around 7,000. The chart below was used. 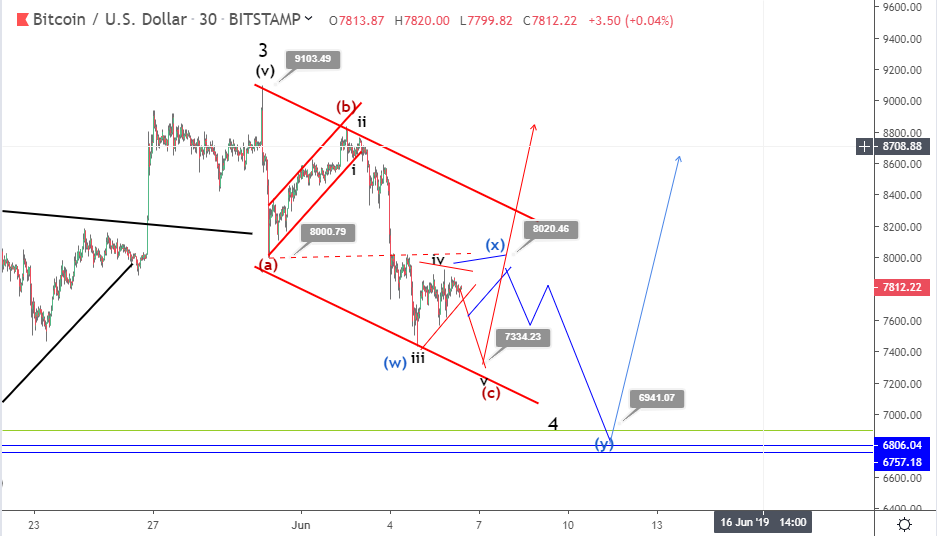 A huge break above the 8,000 handle and above the falling channel would have confirmed the end of wave 4 at 7,330. However, the price was resisted at 8,000 after a minor push above it and therefore confirmed the second scenario as the chart below shows. 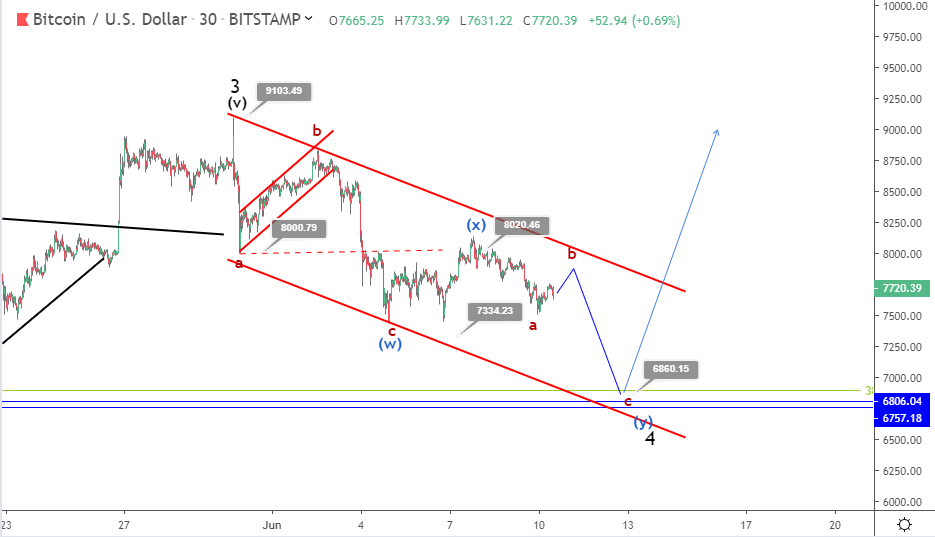 It’s now very much likely that the current dip will continue below last week 7330 low to hit the double zigzag target at 7,000 or slightly below. if the 4th wave completes as expected and price bounces off 6,500-7,000 zone, the 5th wave should pick from there and drive the price toward 10,000-12,000 bullish target zone. On the other hand, a big surge above the channel could still happen to confirm the end of the 4th wave at 7330.

FCA Estimates That 2.3 Million Adults Now Hold Cryptoassets
Forex Crypto
Top 5 Forex Brokers
Top 5 Crypto Exchanges
Your subscription could not be saved. Please try again.
Thank you for subscribing. You will be the first to receive all the latest news, updates, and exclusive advice from the AtoZ Markets experts.
Everyone is reading
Ethereum Facing Support Around $2,300 Price Area - Will Strike Upward?
Danske Bank Rejects Cryptocurrency Trading
Ethereum Foundation Reported That the London Update Is Now Ready on Testnets.
close ×