Bitcoin recovers to $10,700 on Monday after a massive dip to $9,500. What could happen next as the Bakkt set to launch Bitcoin futures?

August 19, 2019 | AtoZ Markets - The cryptocurrency market recovers slightly at the start of this week after a bearish end of the last week. Bitcoin has picked from $9,500 to $11,700. However, BTC still remains in the bearish territory and might drop further if it doesn't quickly hit above $12,000. Meanwhile, the market has gained over $10 billion in the last 72 hours - total market capitalization currently at $278 billion. Bitcoin maintains its huge market dominance, now at 68.7 % according to data provided by Coinmarketcap.

Bakkt is set to launch physical Bitcoin futures contracts on September 23. This could be another weapon in the armoury of the bulls to give one more shot toward the all-time high. Bakkt is a crypto trading and payment platform which aims to quicken the institutional adoption of Bitcoin. Bakkt offers a strong Bitcoin custodial service with an insurance cover of $125 million.

Bakkt has now announced that it has been cleared to launch its Bitcoin futures on September 23 having secured the necessary approvals. The firm has also secured a partnership deal with ICE's leading futures exchange and clearing infrastructure to deliver Bitcoin futures contracts to participants in over 30 countries.

This news has given the market a big boost - intercepting the fast dip that dragged BTC from $12,300 to $9,500 in just nine days. With the way the market reacted, this is a good deal and with more of adoption-related positive news coming, there should be a much bigger boost. Bitcoin could still hit the current all-time high this year if the current bearish correction ends before the last quarter and huge bullish volatility follows. How easy can that be?

From the angle of technical analysis, the BTC price oscillates between $12,300 and $9,100 critical levels as also shown in the last update. The new chart below shows the two most likely scenarios based on the Elliott wave theory. 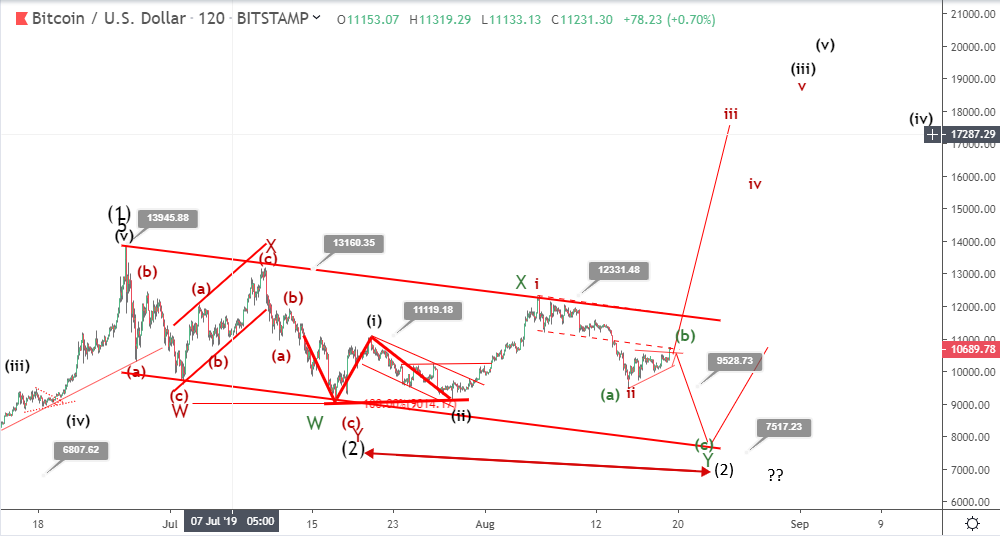 The dip from $13,900 is clearly corrective. A 'simple' double zigzag pattern completed at $9,100 to end wave (2). However, it was shallow and price lacked the momentum to surge above $13,000 and hit a new 2019 high. The current dip suggests a more complex double zigzag pattern which could hit $7,200-7,500 support zone is more likely. However, the two scenarios are still valid depending on where the price heads next.