Bitcoin jumps over 10% in just a few hours to hit a new 2019 high. The bull run continues.

May 27, 2019 | AtoZ Markets – Bitcoin and other cryptocurrencies have had big bullish runs in 2019. After an incredible rally from just above $4,000 in April, Bitcoin has continued the bullish run just before the weekend’s end, to hit close to $8,900. The current upside breakout was expected after a week of sideways price action that completed a triangle/pennant continuation pattern between 8,400 and 6,400. The combined crypto market capitalization has now jumped to $270 billion with Bitcoin having over 57% of that. The run has continued early on Monday, therefore, peaking at nearly $8,900 but has retreated a bit to $8,700 as the week starts proper.

The political war between the US and China has played a major role in this quick advancement since April after the 100-days truce ended and the April 3-6 trade talks yielding no positive results. In recent time, the trade spat between these powerful economies has intensified and investors look for safe-haven commodities and assets that are suitable.  Gold has shed nearly 4.5% since February and 2% since the end of the April trade talks. It seems investors are looking at other options. Cryptocurrency appears to be an easy option, especially for Asian investors.

Since the tariff actions by the US and the recent sanctions on Huawei, the locals in China seemed to have developed a pessimistic mood to the U.S and are also wary of their own local markets. They, therefore, are probably moving their capitals into a more efficient market and more decentralized hence Cryptos. It’s not surprising that most of the big moves since April started during the Asian sessions. BTC price continues to break above 2018 resistance levels and has now hit its highest price since early May 2018. The digital asset has now recovered over 35% of the 2018 bearish trend. Could it cover 50%-61.8% or even more before this year ends?

Since it bottomed at 3,100 in December 2018, BTC price is advancing with an impulse wave pattern. The 3rd wave was expected to have ended at 8,400 and the 4th wave completing a zigzag/triangle pattern. In the last update, we considered two scenarios for the 4th wave. However, the 4th wave seems to have ended albeit shorter than expected. The chart below shows the new update. 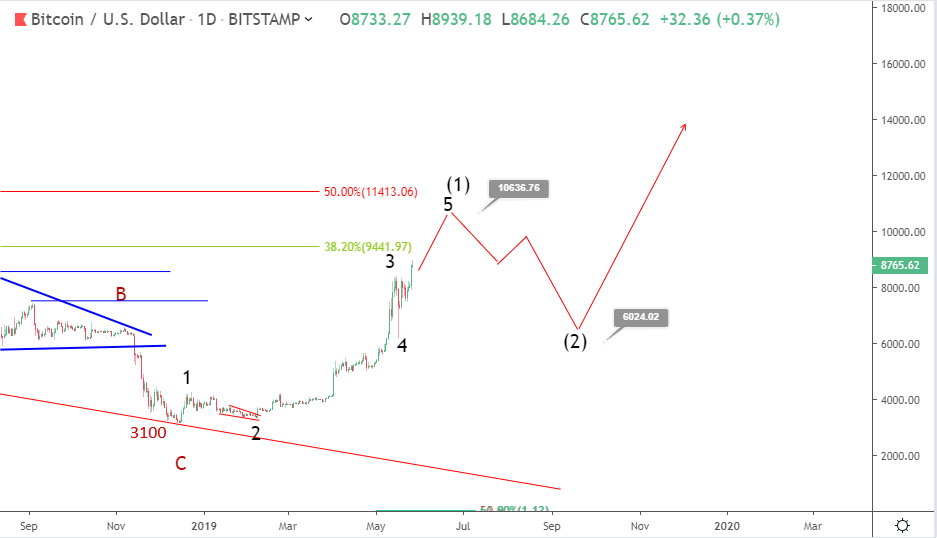 The 5th wave is expected to extend to the 50% retracement of the bearish trend. The bullish trend to hit $10,000 at least, before the wave (2) 3-wave correction commences to test the bullish resolve.