Bitcoin price breaks above 6200 to make the third day of consecutive rallies. Will the $7,000 price level be hit soon?

May 10, 2019 | AtoZ Markets – Bitcoin bull is unrelenting. The digital currency is close to completing three consecutive profitable days with over 9% profit combined. After breaking sufficiently above the $6,000 mark on Thursday, it hit over $6,300 on Friday on most exchanges to complete over 100% from $3,100 bottom.

Since the bearish trend started in December 2017, the current bounce is the largest and the one that has taken the longest time to develop. This sort of bullish development will attract investors. The volatility is normal and there were no sudden spikes. There is a genuine force driving the price to the upside hence the 2018 bearish trend has most probably bottomed at 3100. The focus in recent weeks has been the bullish price pattern developing and the important resistance levels where there could be minor or major dips.

One important thing to also note aside price changes is the BTC dominance of the entire market. In the last three weeks, the Bitcoin price has broken all the resistance levels on its way to the current level. While the long term trend is still bearish (at least for now), the medium-term and short-term trends can now be said to be bullish. Bitcoin has averaged over 3% average daily gains this week. Its market dominance is currently at 58% and has added almost $4 billion (in market capitalization) in the last 24 hours. Bitcoin is the only growing coin out of the top 20 on coinmarketcap. All altcoins are currently in a short-term bearish run with between 1% and 10% loss in the past few weeks. The technicals also signal more rallies to $6,800-$7,000 zone for Bitcoin in the coming days or weeks. 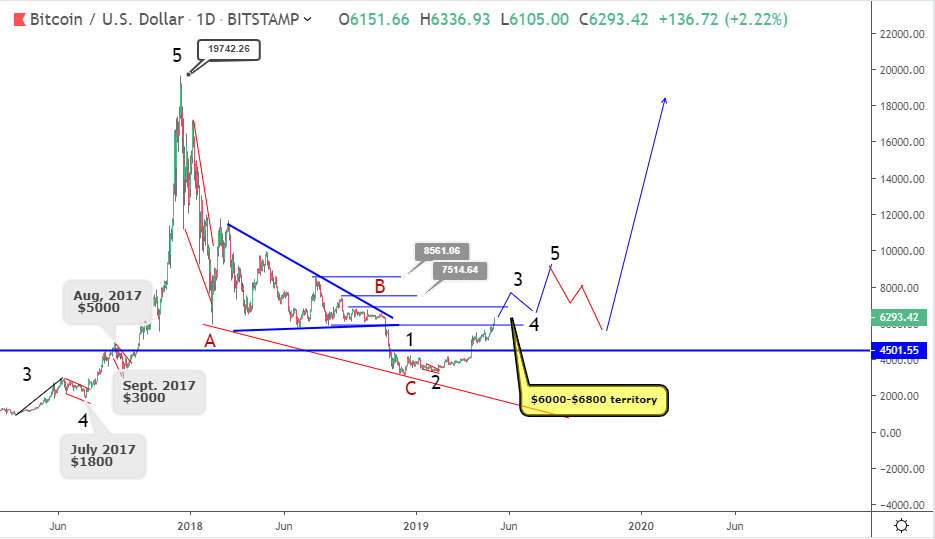 The chart above shows a bullish impulse wave developing into the crucial price zones. Price has entered the $6,000-6,800 zone as the 3rd wave extends. The next price target will be the extreme of this zone at $6,000-$7000. The impulse wave could hit 8500 in the second half of 2019 before a 3-wave dip happens.