Bitcoin dropped massively today in just about a hour, below $6100 support. Almost all major Cryptos listed on Coinmarketcap have entered into the red zone.

In just about one hour today, the Crypto market fell sharply. Bitcoin lost more than 6% in a fast crash below 6100 before retracing close to 6300. In the last 24 hours, price has dropped about 5% at the time of writing. The lead altcoin Ethereum was much more hit with a 11% drop in the last 24 hours. According to Coinmarketcap, the top 100 Cryptos listed are all hit in the drastic fall. Bitcoin is back above $6100, further move downside would see price break below the 5700-5800 barrier and aim 5000 in the process.

Technically, the price chart showed a big move was very close. The Crypto market has been quiet for more than two weeks with sideway triangle patterns completed on Etherem and Bitcoin. The triangle pattern required a breakout which could be upside or downside. Though the upside was more likely as the preceding trend was up but price broke downside instead. The chart below was used in the last update. 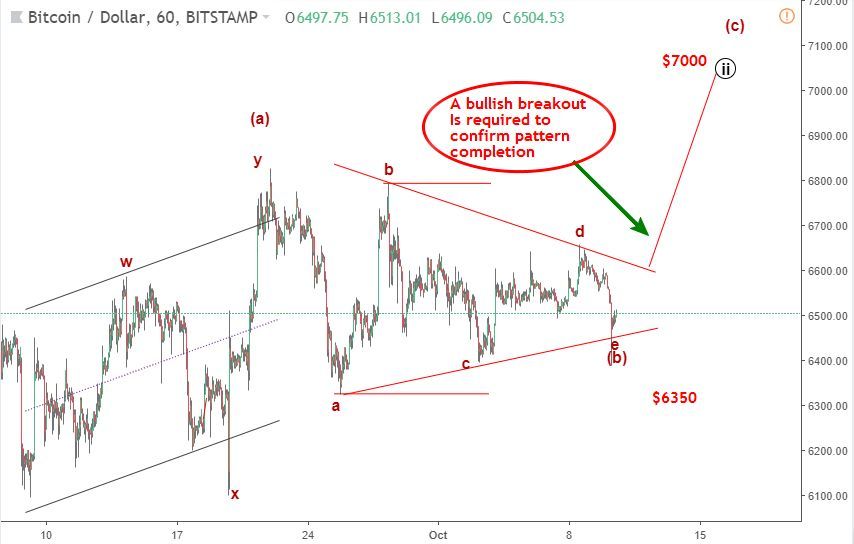 The chart above shows a sideway triangle pattern which started 22nd September and completed the last leg today. This pattern will be valid if price rallies to break out of the b-d triangle resistance line. If a breakout happens, price has a high likelihood of hitting $7000 or above. Lack of bullish momentum might lead to further drops toward $6350 and $6100. We could also see more sideways move between 6500-6600 for few more days before the eventual breakout. If price breaks downside, further decline below 6300 is high. 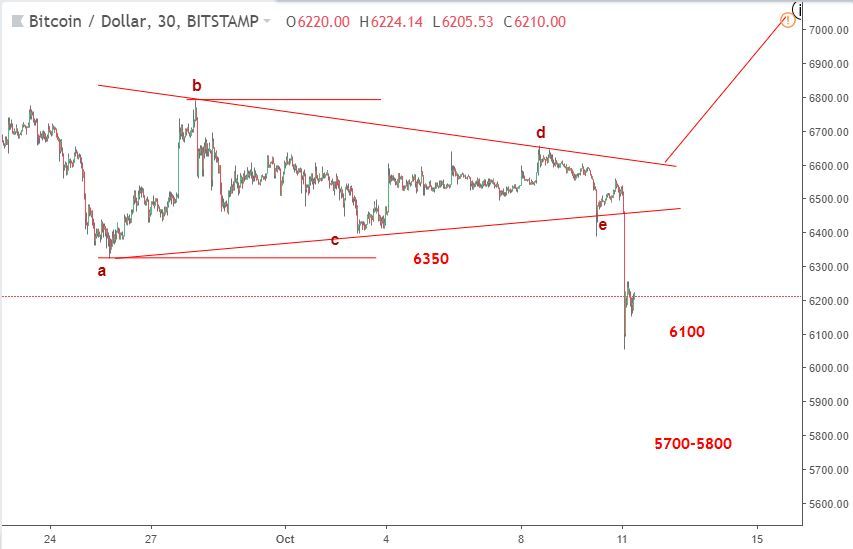 Price dropped sharply below 6350 and hit below 6100. The current retracement could continue to 6350 but the bearish pressure might send price down to retest 5700-5800 support level fourth time this year. A fast break below might see price hit 5000. Unless a fast bullish recover happens back into the triangle region, the bears continue winning.

Bitcoin Could Crash El Salvador’s Economy, Veteran Economist Warns
Forex Crypto
Top 5 Forex Brokers
Top 5 Crypto Exchanges
Your subscription could not be saved. Please try again.
Thank you for subscribing. You will be the first to receive all the latest news, updates, and exclusive advice from the AtoZ Markets experts.
Everyone is reading
SEC Lawsuit Against Ripple May Drag On Until 2022
Ethereum Facing Support Around $2,300 Price Area - Will Strike Upward?
Danske Bank Rejects Cryptocurrency Trading
close ×