In the US and China, Bitcoin mining operations are facing mass closures after the drowning nature of Bitcoin prices. The mining business seems to be no longer profitable at the current price.

The plummeting price of Bitcoin is not helping the mining business. This has been revealed after reports of some Bitcoin mining rig closures in the US and China. This week alone, Bitcoin has lost more than 25% of its values after hitting $4000. Yesterday's bounce to $4500 hasn't been sustained and it looks very much likely that price would hit $3000 if there is no big move upside. Mining operations might have been reducing for some weeks even before the recent crash started last week. This drop in mining operations was reported to be one of the reasons for the current price plunge.

Bitcoin mining is a process of generating new units of Bitcoin by solving complex codes. This requires huge investments in suitably fast computing machines which depend on vast amount of energy to be powered. According to estimates, for breakeven mining operations, Bitcoin will have to trade at $7,000. This means that for many months, miners have been struggling to stay in business. With Bitcoin now far below the breakeven price, mining operations may no longer be economically viable.

Mining Rigs Are Closing Down

There have been recent reports of mining rigs in US and China closing down. Giga Watt, a US-based mining firm is the biggest victim so far. The company was forced to file for bankruptcy this week after it was unable to pay debts of around $7 million. According to Coindesk, the filing was stated:

''The corporation is insolvent and unable to pay its debts when due''….. ''the corporation and its creditors would best be served by re-organization of the corporation under Chapter 11 of the bankruptcy code''

An Hong-Kong based mining firm – Suanlitou announced this week that it was not able to cover electricity fees for ten days in November. On the social media, there are videos and images of mining firms in China closing down, despite the cheap cost of electricity in the country. Due to short of profitability, there are reports of another group of Chinese-based miners closing down 20,000 mining rigs. 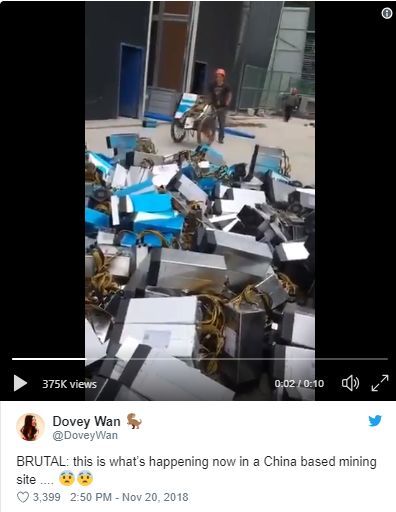 With all that chaos, some analysts still expect more price dips with next target at $3000 as prices near their true values. There are others who believe there would be a turnaround as price might get attracted to the mining 'breakeven' price at $7000 and even surpass it. It's not clear what the future holds for Bitcoin and other cryptocurrencies but the current trends do not look promising.