Cryptocurrency and bitcoin, in particular, often become objects of ridicule and disputes due to their incompatibility with the giant traditional payment systems like Visa, Mastercard, and PayPal. However, according to MoffettNathanson an independent research organization technical analyst Lisa Ellis, a possible challenge from cryptocurrencies to existing payment ventures is not impossible.

Bitcoin threatening PayPal and Visa, should not be ignored

The price of bitcoins, which reached its peak in December 2017 since then has been steadily falling, is rarely considered to be associated with the use of this crypto as the primary means of payment. Nevertheless, speculators hope to earn on the future cryptocurrency prices. However, according to the MoffettNathanson analyst, since the bitcoin network and user experience of cryptocurrency are improving, the threat posed by bitcoin to traditional payment networks should not be ignored. High volatility and lack of liquidity are often used as a counter-argument to those who argue that cryptos might one day revolutionize the payment processing industry, but analyst Lisa Ellis thinks otherwise. "Why should I buy coffee with bitcoins?" – Ellis asks, but then she adds – ” but ultimately it can happen, no matter how funny it sounds."

Cryptocurrency has a lower speed of transactions

In developed countries, at the present time, according to the analyst, it is of little advantage to accept bitcoins or other cryptocurrencies compared to traditional forms of payment. Networks that use Visa and Mastercard process thousands of transactions per second and have a capacity to process even more. The bitcoin network, in its turn, takes about 10 minutes to confirm one transaction, while ethereum transaction takes about 15 seconds.

Cryptos support the philosophy of freedom

Ellis believes that the threat of using bitcoins for traditional payments is also related to their “freedom of money” philosophy. According to analyst "cryptocurrency systems are potentially destructive for private payment systems. Their main design features aimed at providing“ freedom of money ”are directly opposite to the characteristics of most traditional private payment systems.” Meanwhile, banks and payment systems can compensate for this risk by implementing crypto and blockchain technologies, notes Ellis. She predicted that bitcoin might eventually compete with its PayPal, MasterCard and Visa counterparts.

Banks adopting their own cryptocurrencies

As Atoz Markets previously reported that the US Bank J. P. Morgan last month announced the introduction of its private cryptocurrency JPM Coin, designed to compete with XRP Ripple. Banks which adapted to downplay of the impact of cryptocurrencies during the bull market might be right. Ellis advised Visa and Paypal to embrace eventually the blockchain and crypto technology and the banks might have to do the same, to keep their position on the market.

Ellis noted that overall cryptocurrencies and blockchain present opportunities for the different industries. She concluded her statement by saying that the technology could open up new revenue streams, such as “combining networks’ authentication abilities” for tracking goods through supply chains.

PayPal CEO Dan Schulman(pictured below) recently made the remarks about bitcoin mass adoption in January at the 2019 World Economic Forum in Davos, Switzerland. Schulman noted: “We’re not seeing many retailers at all accept any of the cryptocurrencies. But I think the underlying technology is interesting.” 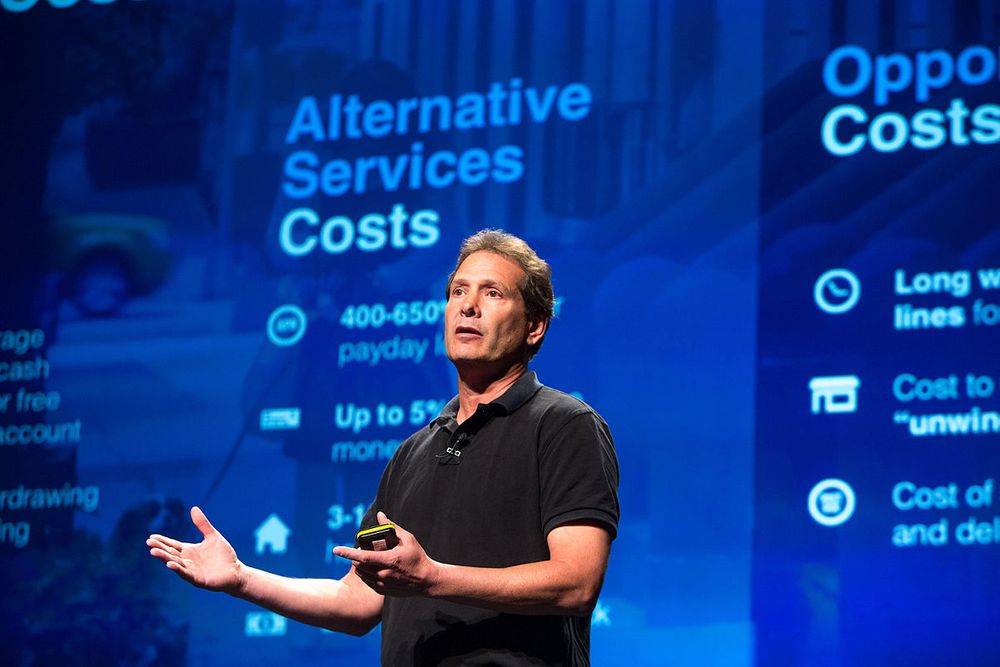 He pointed on bitcoin’s erratic price fluctuations as a major reason for his reluctance to embrace crypto:

“The volatility of bitcoin makes it actually unsuitable to be a real currency that retailers can accept. Retailers have very narrow margins. And when you have a bitcoin bouncing up and down by 15% over a couple of weeks period, that can be the difference between profits and losing money on every sale.”