Bitcoin lost 7% in just 12 hours after almost hitting $5,500. Is the cryptocurrency overbought? Will there be lower prices?

April 11, 2019. AtoZ Markets – The cryptocurrency market had another flash drop on Wednesday after a quick bullish breakout. Even in the current recovery, the bears have shown flashes of their presence in the market. April has been the best month so far in 2019 for the cryptos. Bitcoin and most altcoins gained significantly after the April 1-2 bullish breakout. Bitcoin gained 30% in April when it broke above 4000 to hit close to 5500 yesterday. The rally was not sustained as the price was knocked down toward 5000 losing 7% in just 12 hours.

The total market capitalization which was at $133 billion at the start of the year almost hit $190 billion this week. The trade volume also surged significantly which showed there are more activities in the market underlying traders’ confidence.

Since the rally started in December, the talk of market recovery was less loud than we now have. The surges seen in April brought out the crypto bulls’ confidence that price should be heading for new all-time highs. We reported the opinions of some well-respected crypto-bulls. However, there are two sides to market analysis. Despite the bullish run, a good number of crypto-bears have also discussed the possibilities of the market being overbought. Whether this will lead to new lows or just another sharp declines above December lows remains to be seen.

On 5th April, Bloomberg Intelligence analyst displayed a technical indicator which has been fairly accurate in predicting Bitcoin overbought levels since the bearish market started in December 2017. According to the so-called Bitcoin Global Strength Indicator (GTI), the BTC price is currently at its most overbought level since the bearish run started. Bitcoin dropped from 5450 to 5050 since yesterday. If the price drop continues, how far will it go? Let’s get perspective from another technical methodology.

Elliott wave theory has been very effective for predicting Bitcoin price moves. This is happening probably because there are not so many fundamental factors – the crypto market is currently driven by mass-market psychology and sentiments which fit the theory’s narratives. In the last update, we spotted a triangle that indicated a rally toward 5600 is incoming. Price broke upside as expected, close to 5500 but dropped quickly.

To accept that prices have bottomed and completed the bearish phase, a motive wave should be clearly visible from the lows. A bullish impulse wave or leading diagonal pattern. Once this is confirmed, we would expect a 3-wave bearish correction before further rallies. How have these played out? 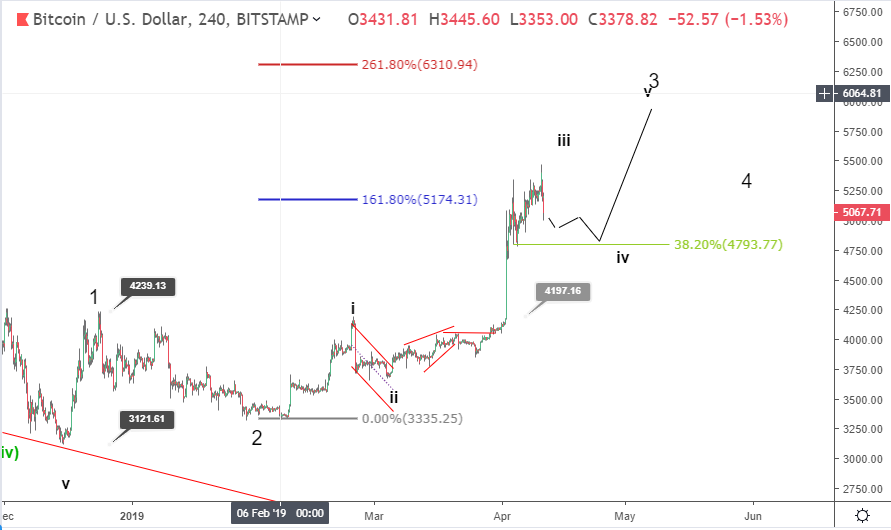 A bullish impulse wave from 3100 is clearly playing out. Price is still making up the 3rd wave which could extend beyond 161.8% Fibonacci extension of wave 1 from 2 since wave 2 was very deep. An extension to 261.8% at 6000-6300 (strong resistance zone) is very likely for wave 3 completion. The chart above clearly shows that the impulse wave is still developing and price might not have been overbought yet unless a fast dip happens below 4200 to invalidate the wave pattern. The current dip might continue to 4750-4500 before the bulls push further.