Is Bitcoin the answer to surviving the next financial crisis? This question is pertinent as the potential for a global recession appears to be increasing.

April 22, 2019, | AtoZ Markets – Recall a folktale about a factory worker who is suspected of stealing. One evening, as he leaves the factory, the wheelbarrow he was rolling in front of him was covered with cloth. The security guard lifts the cloth to check underneath but finds nothing and pass the man through.

The following evening, the worker again approaches the gate to leave and the guard again inspects the wheelbarrow, only to find it empty. The dance continues each night for twenty years until the penny finally dropped: the worker has been stealing the wheelbarrows themselves.

The moral of this old folk is that sometimes the answer to something is so obvious, but you just can’t see it. The security guard has been distracted by the valuables the worker could be stealing, never once did he think of the vehicle he might be using to steal them. The obvious presence of the wheelbarrow is what allows it to remain unquestioned – it is hidden because it is in plain sight.

The next financial crisis

Our own financial system has its proverbial wheelbarrow: the U.S. dollar. In the midst of each financial crisis, we conduct post-mortems on offers and deals that were made. We question federal characters. We fire the person responsible for giving another person the green light. We bail institutions out. New legal and financial guardrails are introduced. In short, we try to be better prepared for the next collapse.

But what if the actual problem lies within the nature of the dollar itself? This is the question that led Satoshi Nakamoto, the creator of Bitcoin to begin working on the cryptocurrency – which was eventually released to the world in the midst of the Great Recession of 2008.

Because we have yet to see how cryptocurrency performs during a worldwide financial crisis, there are plenty of theories around the fate of Bitcoin during the next financial crisis slated for 2020 by economist and experts alike. No one, of course, can know for sure, but history allows us to draw a reasonable blueprint. What happens to Bitcoin in a global financial crash largely depends on the crypto’s position in Exter’s pyramid and the time horizon being considered.

That was the seed of the 2008 financial crisis. When major banks’ debts were called in, they didn’t have the money to cover it because they were overexposed on bad loans, much of it subprime mortgages. This time, it’s subprime car loans. U.S. personal debt has risen to $13 trillion, higher than U.S. personal debt levels before 2008. Americans have taken on a lot of debt at extremely low-interest rates, including car loans and mortgages.

As interest rates start to go up, Americans who have just been getting by will no longer be able to make payments on mortgages, car loans, student debt, and credit card bills. That could trigger the next financial crisis. What role Bitcoin and cryptocurrencies will play here?

A flight to the bottom

Exter’s pyramid, as described in the Bitcoin Standard Monthly Bulletin, was developed by the late New York Federal Reserve Bank vice chairman John Exter and provides a model that organizes financial assets according to the risk and their corresponding liquidity.

The higher the reward of an asset, the higher the risk associated with it. And the more the risk and reward of an asset, the less likely it is to be liquid. The bottom of the pyramid is narrow because the assets at its bottom are hard to increase in supply. As you rise up the pyramid, the assets increase in volume, as they become easier to produce, which both increases their risk and reduces their liquidity.

At the bottom of the pyramid is gold, which offers no returns, but is the safest asset because it is no one’s liability. It also has the highest liquidity because it is a financial asset that has been accepted in a vast majority of places throughout history and because it is an asset whose value is not dependent on anybody fulfilling any obligations.

History shows that no matter how many newfangled new monetary inventions are made, once the going gets tough, people will flock back to the familiar, liquid, impersonal, and trustless safety of gold. So could bitcoin be an alternative in the impending debt crisis?

Demand for Bitcoin is driven by its liquidity and usefulness for international quick payments and that means Bitcoin can be viewed as being closer to the base of the pyramid. Therefore, you would expect demand for Bitcoin to rise in the midst of a financial crisis, as people choose to sell less liquid assets for Bitcoin.

Investors aware of the impending debt crisis are going to buy gold ahead of time and they’re not going to store it in the bank. As Tweeted by Kim Dotcom, who previously also shared how gold and cryptos make sense in the next financial crisis: 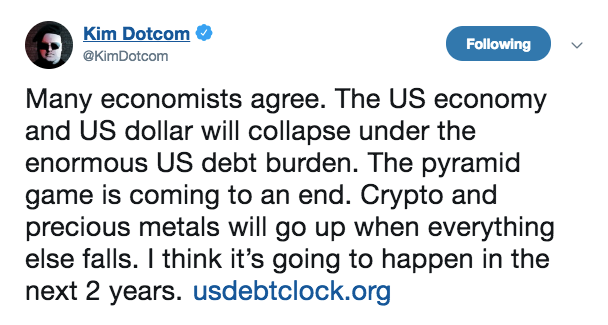 When the next debt crisis hits, one thing will be different. In 2008, the major assets in the alternative class consisted of gold, silver, and real estate. This time, there’s a whole new world of alternative assets. 2017 has seen an explosion of cryptocurrencies. Not only has Bitcoin surpassed the $19,000 mark at the peak of its bubble and settled down at prices that are still astronomically higher than 2017, but there are also now hundreds of competing cryptocurrencies and ICOs in a frighteningly unregulated market.

In the event of a debt-triggered market panic, Bitcoin will likely see major gains in the aftermath alongside cryptocurrencies that are easy to trade. For example, gold dealers like Silver Gold Bull accept Bitcoin, Ethereum, Dash, LiteCoin, and several others in exchange for gold and silver. So regardless of Bitcoin’s performance in the next financial crisis, one thing is certain: it’s time to take a critical look at our wheelbarrow.

Do you think Bitcoin represents a better solution to the next financial crisis? Let us know in the comments section below.