The stereotypical Bitcoin owner is a male in his late twenties, usually a programmer with a slight inclination for the right side of the political spectrum. What does research say? Does the same image of a cryptocurrency fan prevail in other countries? The latest global report by Luno and Metricso shows that it’s not really the case.

December 03, 2018 | AtoZ Markets - The Luno platform, which allows to buy Bitcoin and Ethereum, checked what cryptocurrency enthusiasts are interested in. In cooperation with Metricso, the profiles of nearly 140,000 adult Facebook users and 15,776,160 of their interactions in social media on three continents – in Asia, Africa and Europe – were analysed.

The goal was to learn whether cryptocurrency users from various countries have something in common. There are many stereotypes about the cryptocurrency market. The average Bitcoiner is pictured as a hacker, a speculator, or even a criminal.

The research by LUNO, however, reveals an entirely different image of people interested in this sector. In Luno, we have compared the interests and views of people in Poland, South Africa, Indonesia, and France. (for start – soon more data about 10 more countries :))

We are aware these countries differ in terms of economic development, culture, history, or even typical ways of spending free time. That is why it was even more interesting to look for things they have in common.

Cryptocurrencies are a man’s world? Not in Poland!

Men constitute the majority of those interested in cryptocurrencies, regardless of the country or continent. However, the key difference is the percentage of women taking part in the study. Although men are also the most numerous group in Poland (64%), women are not far behind.

The age structure is no surprise as well. Virtual money attracts mainly the youngest respondents, under the age of 24. Their share varies between 38% in France and 32% in the United Kingdom. Interest in digital currencies diminishes with age. In all countries studied by Luno and Metricso, the share of people over the age of 55 did not exceed 10%. 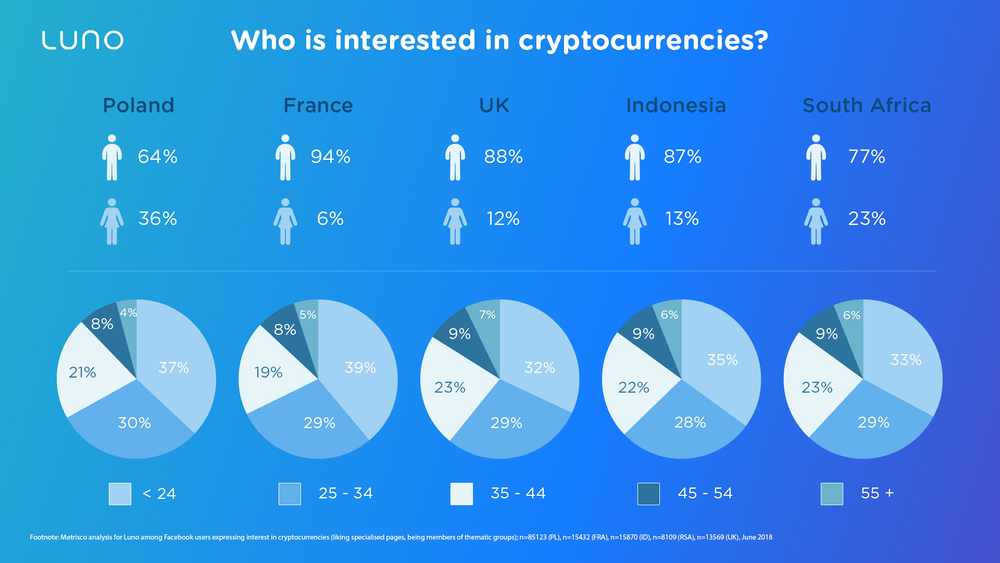 Start-ups are popular with cryptocurrency fans

For the respondents from 3 continents, the main area of ​​interest is broadly defined knowledge and recreation. Art, culture and sport are further down the list with similarly high numbers. Poland is an exception, where television and music take priority over knowledge.

What do Bitcoiners stand out with? They are typically young, active people who grew up in the Internet age. They are quite familiar with fintech issues. They are also curious about the world. Among the respondents are travellers, businessmen, music lovers, film fans and athletes. People interested in cryptocurrencies tend to search for information about start-ups, entrepreneurship and marketing.

The individual groups stand out with their higher-than-average interest in business and exact sciences. Cryptocurrency enthusiasts in Poland and the United Kingdom are interested in start-ups 13 times more than the general public. They follow pages devoted to marketing, science or politics much more often than the statistical social media user. 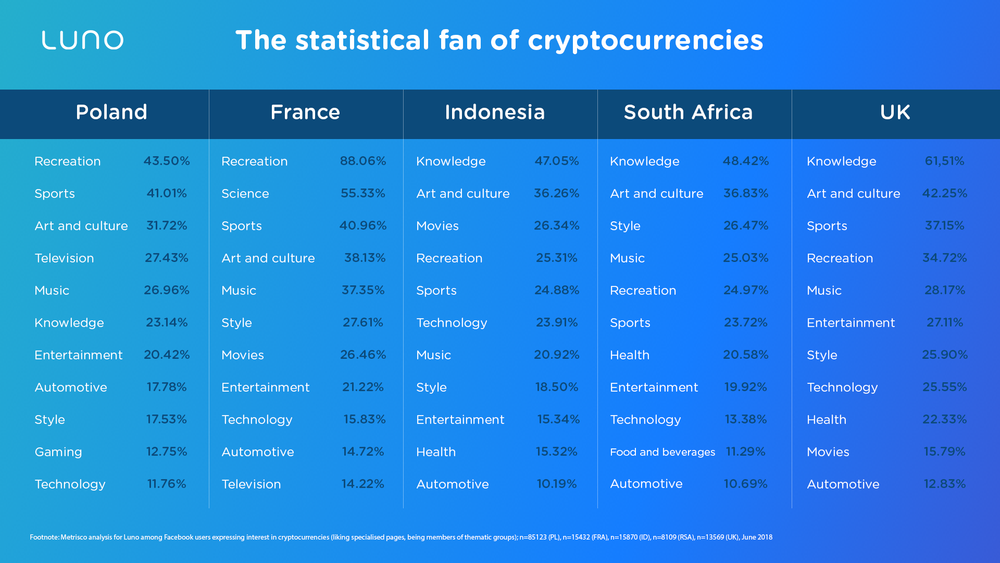 Due to cultural differences, it is difficult to analyse the preferences of cryptocurrency users regarding music and film, but the same names recur in many countries. Vin Diesel and Robert Downey Jr. are the unquestionable leaders, and in all of the studied countries, apart from Poland, Mr. Bean’s profile (!) turned out particularly popular.

What do Bitcoiners listen to? Rappers are the most popular, among others Eminem, Lil Wayne, Snoop Dogg, and 50 Cent. Other popular artists include Justin Bieber. Bitcoiners’ favourite and most followed artist in Poland is TAITO. Other notable picks include the duo Taconafide, who wrote the Cryptocurrencies hit.

The most frequently followed public figures also include TV presenters and personalities, as well as politicians, mainly associated with the right side of the political spectrum or with alternative movements. The survey in Asia offered interesting insights.

Female cryptocurrency enthusiasts from Indonesia are up to 19 times more interested in politics than statistical social media users in this country. Bitcoiners from South Africa followed the pages of companies from the military and defence sectors 20 times more than the average users.

In my home-country Janusz Korwin-Mikke was the first name on the list. Other popular figures included Filip Chajzer, Martyna Wojciechowska, Paweł Kukiz, and Magda Gessler. Owners of the digital currency are also particularly interested in people related to politics and economy, e.g. Jacek Bartosiak, Jacek Wilk, or Artur Dziambor.

We also investigated which influencers they follow. Apart from the well-known ones, such as Krzysztof Gonciarz, Maffashion, and Rezigiusz, also popular are the e-sport commentator Piotr ‘izak’ Skowyrski and professional gamer Jarosław ‘pasha’ Jarząbkowski.

Fans of digital currencies often do not limit themselves to the knowledge that is available through social media. They also like reading business and economic press. Apart from that they also tend to read magazines and newspaper such as Inc. Magazine, Fortune, Financial Times, Forbes, and Harvard Business Review more often than the general public. Lifestyle press is also popular, notable examples including Architecture & Design, Men's Health, ELLE and Cosmopolitan.

In Poland, the most popular titles include Przegląd Sportowy and Kwartalnik Przekrój. Polish digital currency users leave the general public far behind as far as reading business press is concerned. The Parkiet daily is read 13 times more compared to the average Polish Internet user, followed by Puls Biznesu at 4 times the average.

When it comes to preferred TV series and shows, cryptocurrency users are not much different from the average Joe. Game of Thrones is the most popular series, followed closely by The Walking Dead, Vikings and Prison Break. Entertainment shows, such as The Tonight Show, Top Gear and Jimmy Kimmel Live, are also very popular.

Among the most popular film genres are horrors (Europe) and fantasy (Asia). 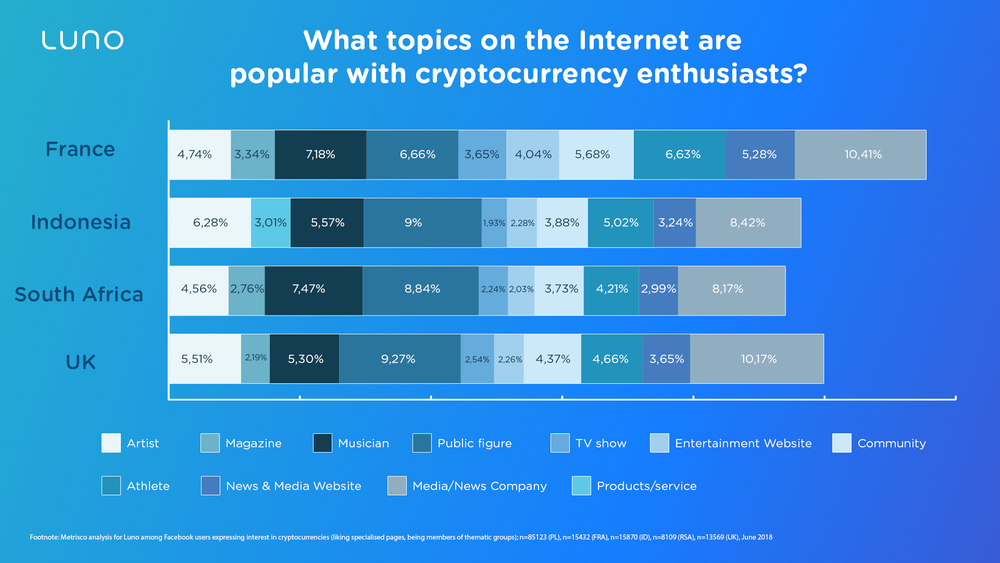 This article was written by Magdalena Gołębiewska, the Country Manager of Luno. If you have any questions or simply want to talk, do not hesitate to contact her per email magdalena@luno.com or phone +44 7904 389 285.

About Luno, it is a leading platform offering digital currencies (Bitcoin and Ethereum) that enables everyone to buy and trade them easily and safely. The company operates in over 40 countries and has offices in London, Singapore and Cape Town.

It employs over 200 experienced technology and finance professionals. Its main shareholders include Naspers, a global IT and e-commerce tycoon and owner of well-known platforms such as PayU, Kreditech and Showmax. In 2018 Luno was recognised as the fastest-growing tech company in the UK in the Tech5 competition organised by Adyen and TWN.

Tags Bitcoin Cryptocurrencies Ethereum Facebook Luno
Forex Crypto
Top 5 Forex Brokers
Top 5 Crypto Exchanges
Your subscription could not be saved. Please try again.
Thank you for subscribing. You will be the first to receive all the latest news, updates, and exclusive advice from the AtoZ Markets experts.
Everyone is reading
Is Forex Trading Halal or Haram in Islam?
Top 5 cryptocurrencies 2021 | Best Cryptocurrency To Invest
How to Setup Monero Mining in 2021?
close ×