Bears lead Bitcoin Future Price and lost more than 20 percent of its value after the disagreement among Bitcoin developers. Bitcoin comes with great possibilities but also involves great risks in future. So, Is the Bitcoin split inevitable?

AtoZForex – Bitcoin on Monday crashed nearly 20% due to a disagreement among Bitcoin developers about its future. The Bitcoin dropped as low as $US970 and is trading at just over $US1,000 this morning, after reaching US$1,259 last week. All tough this drop is temporary but some major issues in future might cause huge Bitcoin price crash. Is the ”leader of cryptocurrency – The Bitcoin” is at major risk in Future? My answer is Big ‘No’ as the demand is quite high and is among the Top 10 cryptocurrency in 2017.

Bitcoin’s fundamentals look good, with growing acceptance as a form of money. My price target of bitcoin is $2,000 by the end of the year 2017. Traditional analysis methods do not apply when predicting the price of bitcoin. That’s why I use more fundamental approach in this article in order to come up with a bitcoin price forecast for 2017.

Fundamentally, the Bitcoin usage data look great and usage of bitcoins keeps on increasing. Because of the fact that bitcoin is a form of money, the increasing acceptance of bitcoin is the most fundamental data point to consider. According to Statista, bitcoin usage keeps on increasing as seen by the number of Bitcoin ATMs. Data showed that it increased from 538 in January 2016 to 838 by November. Most Bitcoin ATMs were located in the United States (345) and Canada (108). 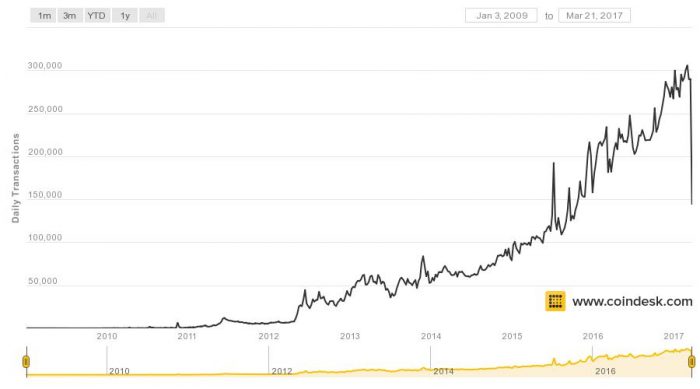 Think we missed something? Let us know what do you think about Bitcoin Future Price in the comments section below.