Bitcoin continuing the Bullish Trend may reach $9500 area soon. The price is curerntly consolidating at the edge of $9350 forming a Bullish Flag pattern. Let's check Bitcoin Technical Analysis for more levels and insights.

January 30, 2020 | AtoZMarkets.com - Bitcoin has been quite impulsive with the recent Bullish Momentum which surpasses $9000 area with ease recently. The price is currently correcting at the edge of $9350 area while forming a Bullish Flag pattern which may empower further upside pressure.

Bitcoin pushed higher about 1.41% since yesterday resulting in higher Market Cap at $167.9 Billion. Since last 7 days, Bitcoin managed to gain above 6.88% while having certain corrections and retracements along the way. Bitcoin is still down by 53% from it's highest peak at $19,870. But current consistent Bullish pressure is indeed remarkable may lead to strong Bullish trend.

Bitcoin may break above $9500 area while having crucial support at $9150 area. As the price sustains Bullish pressure above $9000 area then further upward climb will be easier than expected.

Bitcoin recently managed to sustain the Bullish pressure despite certain corrections and volatility along the way. The price was impulsive and strong while breaking above $9000 area but turned Bitcoin corrective after reaching $9420. The price rejected the $9420 area for a several times and pushed lower forming a Bullish Flag pattern. As the Flag Pattern confirms a break higher, Bitcoin can continue the Bullish Trend in the coming days. 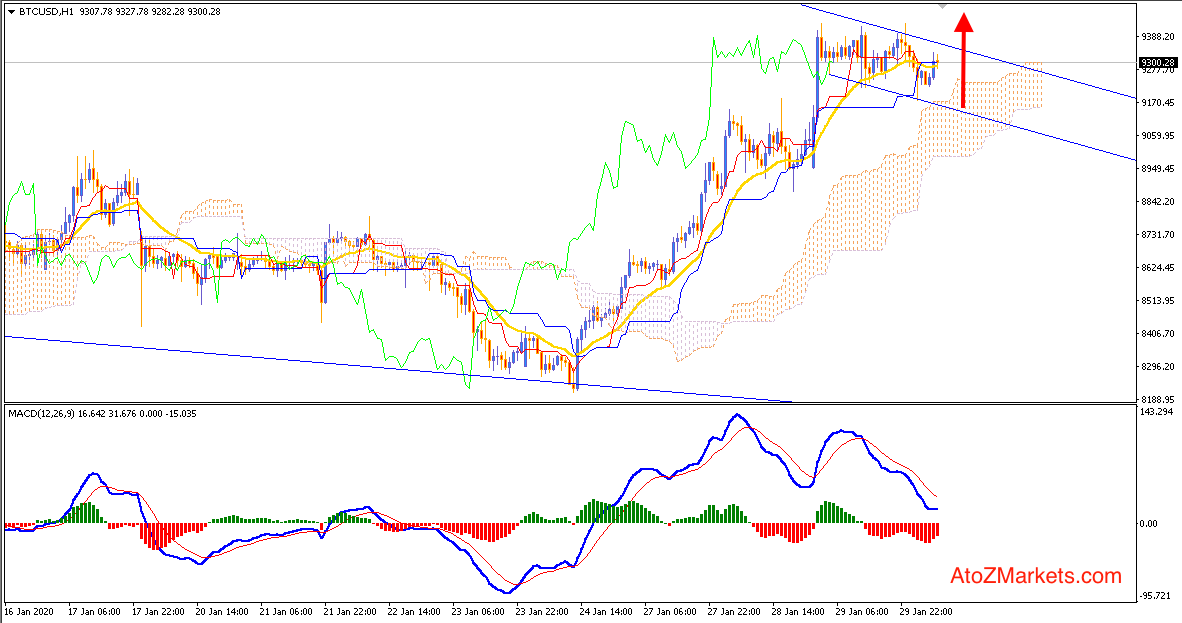 According to Bitcoin 1 Hour chart, the price is currently corrective and volatile while pushing lower towards the Kumo Cloud support. The price formed a Falling Channel after the impulsive Bullish presure which lead to formation of Bullish Flag pattern. The Chikou Span (Green Line) is currently residing at the edge of price line which if broken along the way Flag resistance will confluence for further upside pressure.

The price may retest the Channel support again before continuing to push higher and reach $9500 area. MACD having no sign of Bearish Divergence is an indication of continuation of Bullish pressure in the process. A break above the Channel resistance is important for the Bulls to establish a reliable trend in place which might lead the price towards $10,000 as well. 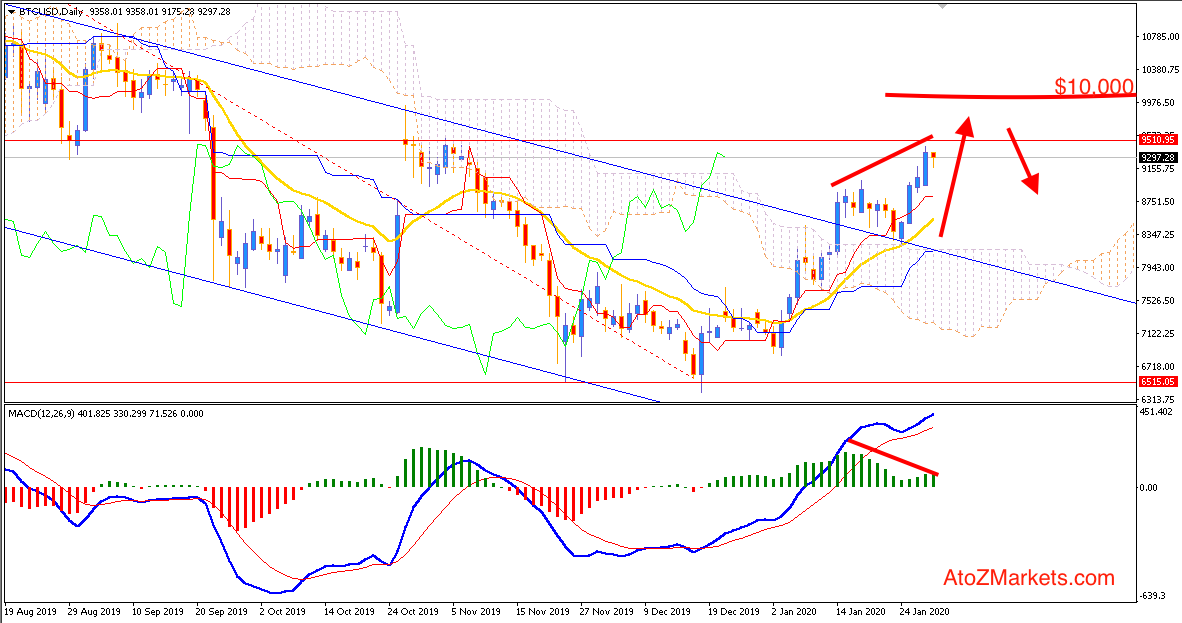 Bitcoin has been consistently impulsive with the Bullish trend since it bounced off the Channel support at $8200. The price having confluence from the dynamic levels is currently pushing higher towards $9500 and may reach $10,000 area as well.

After Bitcoin broke above $9000 area, price pushing higher towards $9500 formed Bearish Continous Divergence along the way. Though it might not create a strong counter for the Bulls but may lead to certain Bearish intervention. As the price a strong price point like $9500 or $10,000 area, certain Bearish pressure in form of retracement may be seen.

Though the upcoming Bearish pressure off the level may not match the current Bullish Bias and result in retracement only. Bulls having strong confluence from the Fundamental and Technical factors may lead Bitcoin to reach a strong price point like $10,000 area in the coming days.

To conclude, Bitcoin may reach $10,000 area surpassing $9500 area and continue the Bullish Trend. The price rejecting upcoming resistances may not turn out as Reversal but may lead to certain retracements.

Jack Dorsey: “Bitcoin Will Replace The Dollar”
Broker of the month!