Bitcoin has recaptured the $60k position after a six month period of ups and downs. Bitcoin prices have been on a slow grind upward since the beginning of this month.

The price of the flagship cryptocurrency Bitcoin has hit $60,000 for the first time in six months this morning. BTC is now trading 7% below the absolute highs recorded in April of about $65,000. Bitcoin prices have been on a slow grind upward since the beginning of this month.

Before the upward price action began, prices had hovered around $42,000 from Sept. 20 to Oct. 1. The $60,000 mark was first breached on Bitstamp exchange just after 5 AM (UTC). The price has since eased slightly and at the time of writing, Bitcoin is trading around $59,037. 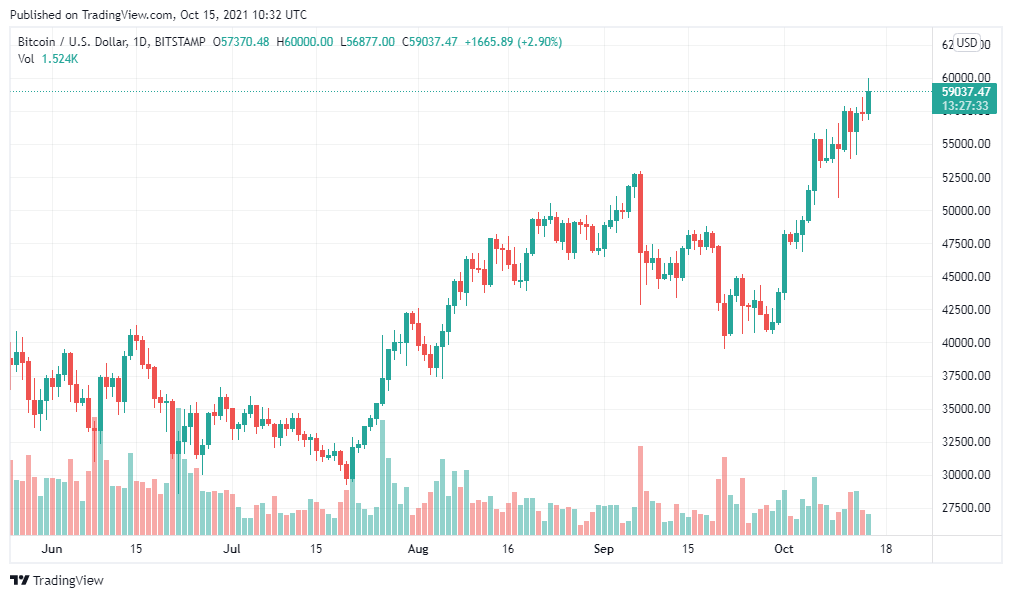 The growth comes amid Bloomberg's report that the US Securities and Exchange Commission (SEC) is ready to admit the first bitcoin ETF based on futures. According to sources, "the regulator is unlikely to prevent the launch of trading in the product next week."

SEC Chairman Gary Gensler said earlier that the ETF based on bitcoin futures is able to satisfy the agency's requests from an investor protection standpoint. Four Bitcoin ETFs may start trading in the US market this month. Bloomberg names ProShares and Invesco's bids as potentially subject to approval next week, while VanEck and Valkyrie are citing the end of the month.

The SEC has already postponed four more applications to November and December, but they are based on the spot cryptocurrency market, and not on futures. By law, the SEC is not even required to officially approve ETFs - if the regulator does not issue a waiver within the specified timeframe, they will automatically be considered approved.

Bloomberg Intelligence analyst Erik Balchunas says that with the latest announcement, the probability of ETF approval has increased to 90%. Now all that remains is to wait for the changes in the applications of the respective issuers as the last confirmation. At the same time, he notes that the futures ETF may not meet the expectations of market participants, but, nevertheless, it will become a key event after 7 years of waiting.