Bitcoin cash has gained more than 200% to hit $220 after recovering from $74 bottom early this week. Could the bullish momentum be sustained or price will drop further?

December 21, 2018 | AtoZ Markets -  The Crypto market has been bearish this year. Earlier this month, almost all major Cryptos fell to their fresh 2018 lows. Bitcoin cash (BCH) which hit $4000 almost a year ago, dropped to $74 early this week to shed almost 98% since the year-long fall started. Across the board, the Cryptos have started the biggest bullish recovery (so far) since the November bearish breakouts. BCH just days ago, was trading at a lower price than Ethereum for the first time ever. However, price activities have changed in the last few days as BCH has gone back ahead of ETH to trade at $220 (as of the time of writing). This means that price has gained more than 200% from the current bottom of $74. Will this be sustained?

It remains to be see whether Cryptos have reached their bottoms. The current gain might be the start of a real bullish recovery which could be followed by a new all-time-high. It's also very possible that the current rally is just a corrective bounce which would soon be followed by another price penetration to a new low. As for Bitcoin, a new 5-wave rally (Elliott wave theory) to 6500-7000 is required to suggest price has bottomed at 3100.

In the past few months, BCH hash rate has dropped significantly. The mining hash rate which used to be at 5 Exahash per second (EH/s) has now dropped to 1 Exahash/second to 850 Petahash per second (PH/s). The lower mining difficulty has enabled BCH mining to be more profitable than the mining of Bitcoin and most others. This might actually be one of the reasons for BCH currently having a bigger surge than other Cryptos as of now.

Though BCH has performed better than most Cryptos in the current rally, it doesn't appear to have a driving force of its own. All cryptos are still driven by the general market sentiment. If Bitcoin could make a 5-wave advance to 6500-7000, we would see BCH go same way. The chart below shows the bullish outcome assuming price bottomed at 74. 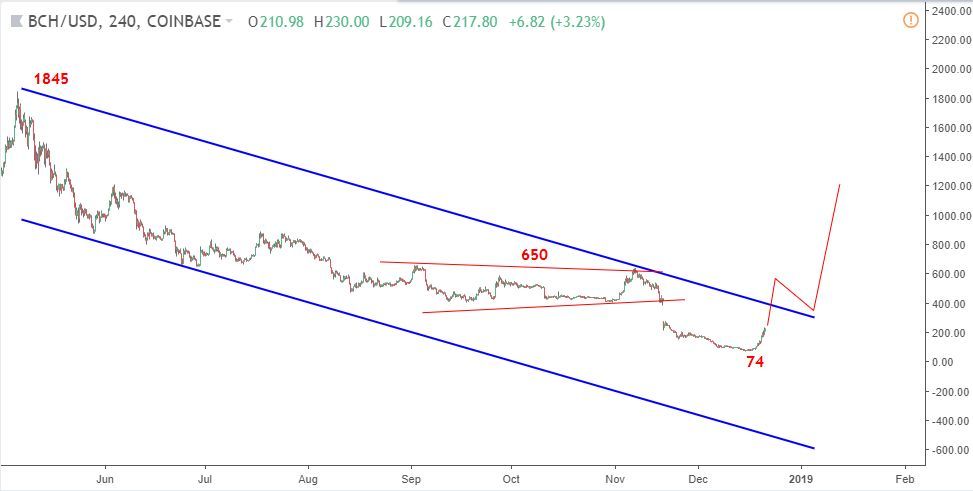 BCH completed the largest bounce of the year in May. The bounce saw price rallied from 580 to 1845 in just about a month and gained about 210%. The current bounce might surpass that, if price could break above the blue falling channel. A break above might see price rally to $1000 and more. At 350, the roof of the channel might act as a resistance leading to a lower low than 74. Let's see what will happen in the last days of the year.