Get VIP Trading Signals Market Watch
Trade Now Your capital is at risk.
Bitcoin Cash is advancing toward $500 after making over 550% gain since the December low. What are the next levels to the upside and what could happen next?

May 30, 2019 AtoZ Markets - BCH has been one of the top gainers since the cryptocurrency market started the current bullish trend. Bitcoin Cash, a fork of Bitcoin, climbed to the 4th position on Coinmarketcap in terms of market capitalization. With $8.3 billion, BCH has nearly 3% of the total market share. While being one of the biggest hit in the 2018 bearish phase, it has also climbed and increased in value much more than many cryptos in 2019 so far.

Bitcoin Cash is having the third bullish spike since December. It rallied from the $72 low to $230 in December before dropping back to $105 in the last days of December and all of January. The second leg of rallies started early February but didn't result in a massive bullish breakout until April when most cryptocurrencies surge quickly. BCH hit $350 and gained over 110% in just two days. After over 50% dip to retest $230 previous high, BCH has gained more in May and is now set to end the month bullish. Currently, BCH trades at $470, very close to the $500 handle. Meanwhile, the price could continue bullish to the $575-$600 resistance zone before a major bearish correction happens.

Most major cryptocurrencies are advancing toward new 2019 highs after breaking some resistance levels on the way. One thing that is becoming a denominator is the impulse wave price pattern emerging across the board - Bitcoin cash is no different. The chart below shows an impulse wave emerging from the $72 low recorded last December. 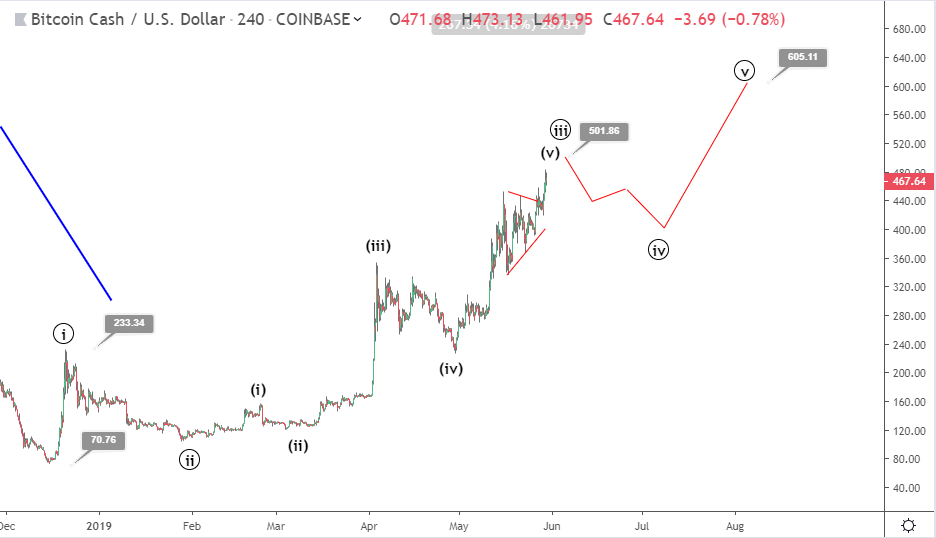 BTH price has not completed the 3rd wave yet. We may have to look at the $500 critical price level for the end of the 3rd wave. A minor dip to $400 or slightly below could happen afterwards before BCH continues upside to the $575-600 important resistance price zone. Once the impulse wave completes, a much deeper bearish dip should follow before the recoveries could continue.