Bitcoin crossed the $6,000 mark and maintains over $100 billion market capitalization as the bullish trend continues. What are the next price targets?

May 09, 2019 | AtoZ Markets – The flagship digital currency is not looking back as it continues to break resistance levels on its way up. In the last 24 hours before this report was filled, BTC has gained over 3.5%  to hit above the $6,000 mark. In other words, the price has entered into the territory that preceded the November bearish breakout. If we can still recall, between March and late early November, the price was held inside a very big sideways range with $5,900-$6,000 the bearish neckline. At that time, it was generally expected that eventually, a break below that zone would happen and the price would dip to a new low. The eventual breakout in November took BTC to 3,100 in mid-December. However, since the low, Bitcoin has gained over 90% to break above $6,000 and hit its highest in almost 6 months.

Bitcoin ahead of the Altcoins

In the last three weeks, the Bitcoin price has performed better than virtually all the altcoins. Its market dominance has surged from 50% at the beginning of the year to the current 57%. Many of the altcoins despite being bullish since December, have become bearish in the last three weeks. BTC trend can be seen in all the time frames. According to coinmarketcap, it has gained over 3.5% and over 12% in the last 24 hours and 7 days respectively. In addition, it has gained over 62% year to date.

The chart below shows price activities since the bearish trend started in December 2017. 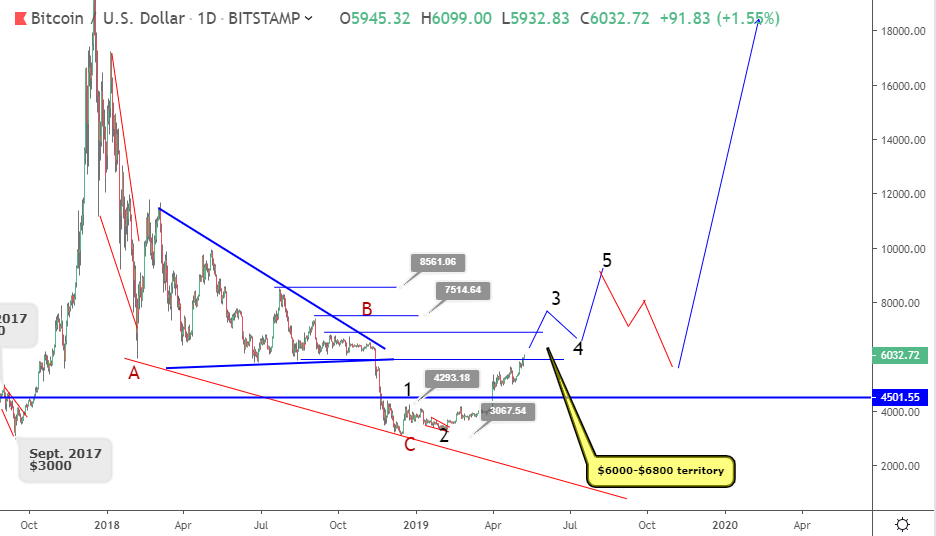 The bearish trend completed a zigzag pattern at 3100 after a 9-month triangle (wave B) breakout in November. The rallies that follow are evolving into an impulse wave. This was expected to be the first sign of a true market recovery. Since the April breakout above 4300, the impulse wave pattern has never been clearer. This means that more upsurges are expected into the 7500-8500 territory. We might see a bit of a corrective dip at the current 6000-6800 zone. Price is in the 3rd wave and the chart below shows its sub-waves and how it develops. 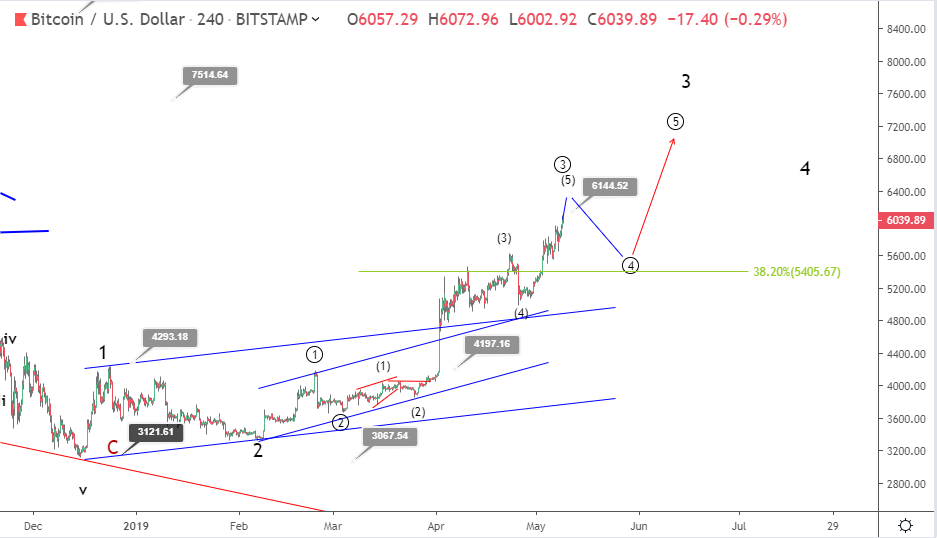 A little adjustment has been made to the last update. Wave 3 is extended. It’s expected to go high into the extremes of the 6000-6800 price zone. At the end of the 3rd wave, a new dip toward 5500-5000 is expected before price pushes further upwards.