Bitcoin is back in the red zone after price couldn't sustain the bullish push above $4,000. The following give technical insights.

March 04, 2019 | AtoZ Markets – The cryptos started a bullish run in February. In the first three weeks February, most of the majors hit close to their January highs and a few, like EOS and Litecoin even soared higher. Bitcoin hit above $4,200 for the first time since 10th January and once again, there were talks of major recoveries across the board.

Is the bearish phase over?

This is one of the biggest concerns in the crypto market. The current bearish phase has lasted more than a year and the sight of a major recovery is not yet clear. The rally from December might just turn out to be another bounce. In 2018 after the first crash from 19,700 to 5,900, price bounced four different times before the sideways bounce that preceded the November crash to 2018 low. The current bounce is quite smaller and more sideways that most of last year's. Most probably, Bitcoin and other cryptos are preparing for yet another crash to new lows. Some technical patterns and indicators are pointing in that direction. Let's look at some of them. 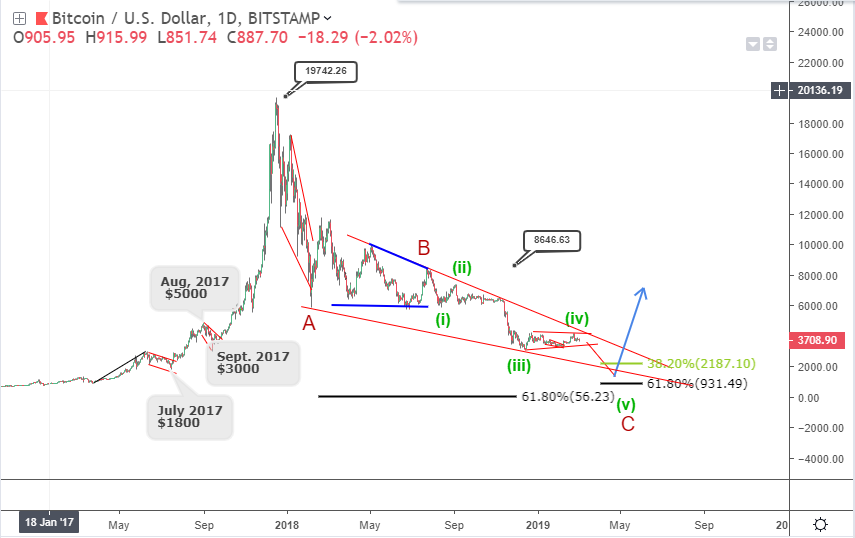 Though Bitcoin has been bearish for more than a year. The dip, however, is corrective. The rally from 2017 was fast and trendy – a typical impulse wave. The dip that followed from 19700 is slower and more corrective than trendy. An A-B-C correction from 19700 might just take one more leg to 1000-2500 support zone before finally breaking upside. Therefore, the sell-off will much likely continue to July 2017 low of 1,800 or around 1,000. The current rally is the 4th sub-wave of wave C of the current bearish correction if the price goes with the wave count above. Let's look at the current rally more closely.

In the last Bitcoin Elliott wave update, the chart below shows the 4th wave rolling into another zigzag pattern. 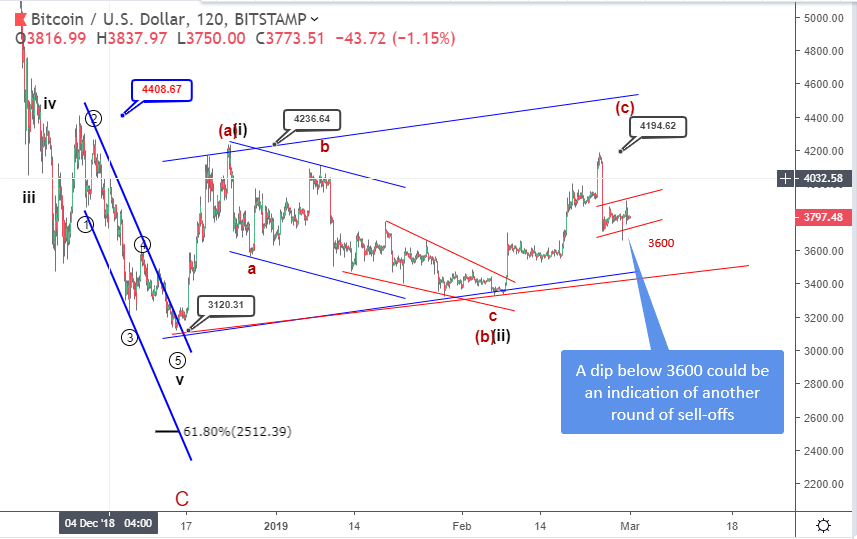 We expected the rally to continue to 4400-4600 but the fast dip showed a dip below 3600 might just continue the bearish run below 3100. The chart below shows how the price moved afterwards. 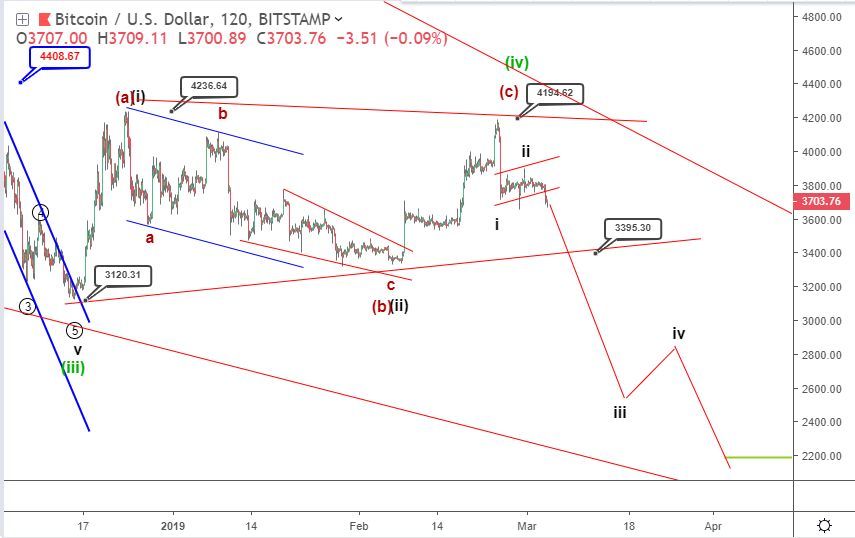 Price is now at 3,700. A break below 3,400 could trigger another round of sell-offs. A dip below 3300-3400 support belt will lead price to a new low below 3100. The next bearish targets are 1,800 and 1,000. It's safe to say until price breaks below 3,400, we might see another push to 4400-4600 to complete a proper zigzag. It's also important to note that the 4th wave mentioned above might complete a triangle pattern. Triangles often complete the 4th wave. The triangle needs to complete a leg down to 3,4xx then a leg up to 4,0xx before price finally breaks downside.

Aside from the Elliott wave theory, which has proven to have been useful when analyzing cryptos, there are other technical indicators and patterns showing downside pressure persistence. Let's look at two.

Engulfing candlestick pattern is one of the most popular candlestick reversal pattern used by technical traders and analysts. It's useful, especially on the daily and weekly time frames. 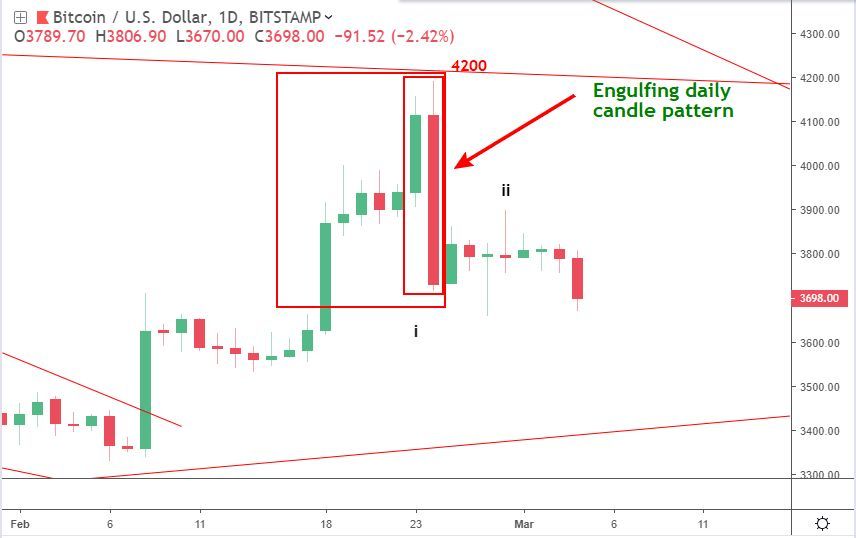 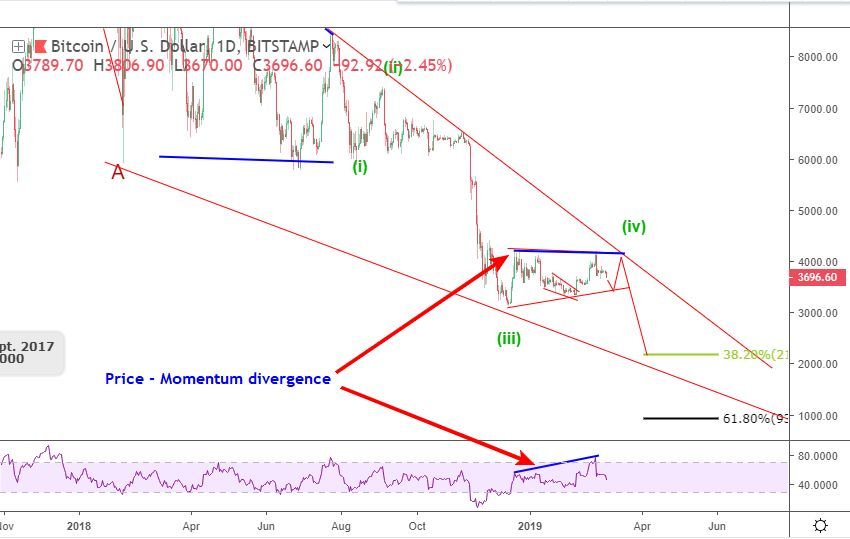 The 4th wave has been sideways from 3100 while the RSI rose swiftly thus creating a price-momentum imbalance. This divergence is a continuation signal for the bearish run. Price is still under an immense bearish pressure unless a fast break to 6000-7000 territory happens.