April 5, 2019, | AtoZ Markets – Despite the strong belief of Bitcoin supporters that cryptos will have the greatest impact on society in developing countries, bitcoin adoption in emerging markets does not seem like fantasy anymore.

Emerging markets attract investors, but remain to be risky

An emerging market is one, which is progressing toward becoming advanced through the development of many socio-economic factors of the country. Emerging markets do typically have a physical financial infrastructure, like banks, a stock exchange, and a unified currency.

However, due to political instability, domestic infrastructure problems, currency volatility, and limited equity opportunities, investments in emerging markets come with much greater risk. Another issue is that local stock exchanges may not offer liquid markets to outside investors.

Emerging countries and developed countries in a brief

The financial experts continue arguing on the exact classification of the nations’  economics into emerging and developed markets.

Experts believe that currently, the most popular unacceptable and non-state-owned asset will once allow those in emerging markets to access banking services to connect billions of people around the world who lack them with the global economy.

Faster economic growth in developing countries tends to attract investors that seek out for the prospect of high profits in a short period of time. As a result, the high speed of financial development partly contributes to the faster bitcoin adoption in emerging markets.

However, the recent Passport Capital a global thematic investment firm’s studies indicate that bitcoin adoption in emerging markets is happening and the crypto buying patterns suggest that the interest lies in more than simple speculation.

For the study of Passport Capital, data from one of the Bitcoin communities was used. To determine which countries fell into which market category, the firm used the MSCI classification.

Countries belonging to the category of frontier markets, such as Greece, which were mentioned earlier, were apparently ignored by Passport Capital. This may be due to the lack of local bitcoins in many countries of this class. 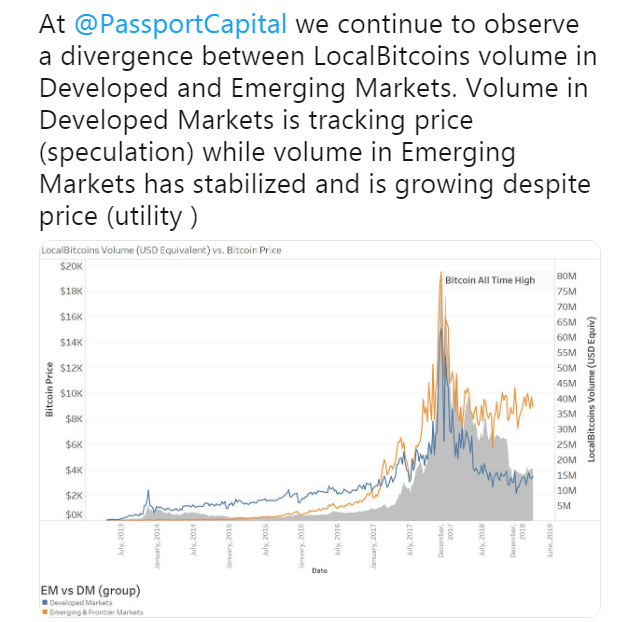 The study showed that the volume of local bitcoins in emerging markets for the first time surpassed that in developed markets in early 2017. Despite the fact that emerging markets account for a significant percentage of reciprocal trade, the figures themselves do not really reflect the actual use of bitcoin in such markets as compared to the developed world.

This is due to the fact that for those who have bank accounts and access to specialized platforms for trading digital assets, there are much more options available.

Developed markets speculate on Bitcoin while emerging markets use it

However, it is important to note that interest in trading local bitcoins in developed countries seems to follow price, while sales from emerging markets have increased in recent years, even though the price has decreased.

This suggests that buyers in richer parts of the world may speculate on an asset, while those who live in developing countries actually use it. Following a sharp jump in prices and trading volumes of local bitcoins at the end of 2017, interest in purchases using the trading platform until recently fell in developed markets.

Conversely, after a brief response, interest in using the service in emerging markets has grown steadily since the beginning of 2018.

The Capital Passport experts suggest, that the likelihood of Bitcoin adoption in emerging markets is possible as it gives access to a wider digital economy as a means of abandoning a country’s economy in times of financial or political upheaval.