The cat is out of the bag! Binance wallet supports Credit Card purchases and XRP according to an official press release.

March 13, 2019 | AtoZ Markets – Trust Wallet, an official cryptocurrency wallet of Binance, one of the largest cryptocurrency exchange in the world, has recently announced that they have added new support features for XRP, the third largest digital coin. 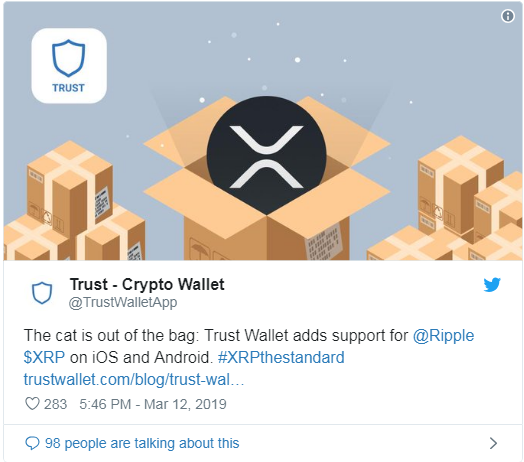 According to the announcement released on March 12, Binance wallet supports credit card, which means, Trust wallet will enable users to buy XRP, Bitcoin (BTC), Ethereum (ETH), Bitcoin Cash (BCH) and Litecoin (LTC), among others and as well as any ERC20, ERC223, and ERC721 tokens with their card.

Concerning this latest addition, the founder of Trust Wallet, Viktor Radchenko notes that they’re keenly looking for increase adoption through the new features. He further stated that;

“We want to increase access to crypto and decentralized applications for all users, Adding credit card payments is one piece to furthering cryptocurrency adoption and realizing our larger vision in helping to bring the freedom of money, and we will continue to integrate more blockchains and features to Trust.”

The announcement also added that this new payment option is being offered in partnership Simplex, an Israel-based payments processor. As well as that, the CEO of Binance, Changpeng Zhao wrote on Twitter; 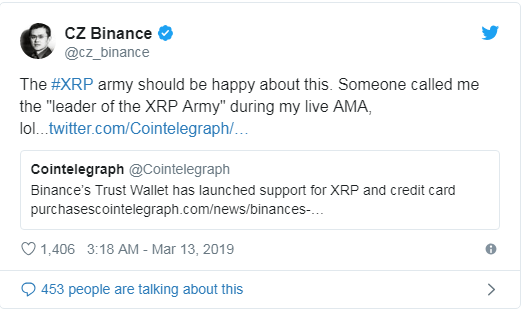 In order to gain access to the new features, all users will need to upgrade their wallets. However, following this latest development, AtoZ Markets made an inquiry on which credit card Trust wallet will specifically support as well as the fees. At the moment, no details regarding those have been received.

It is worthy of note that Binance acquired Trust Wallet back in July 2018, making it the exchange’s first public acquisition. At the time, the wallet was only compatible with Ethereum and Ethereum-based tokens.

Since then, Binance team is continuously working to increase the adoption of cryptos as it has enabled support for multiple virtual coins and currently supports 17 tokens and several decentralized application.

According to Binance, Trust Wallet will be used as the native wallet of Binance DEX along with the Ledger Nano S. Binance DEX is a peer-to-peer decentralized exchange powered by the Binance Chain, the test network that was launched in February 2019.

Just so you know, Binance DEX will be the new decentralized platform that will be promoted by the largest crypto exchange in the world.

Following the announcement, XRP is fairly enjoying favorable market conditions. At the time of writing, XRP gains 0.64 percent over the past 24 hours, valued at $0.31 as per the data provided by CoinMarketCap.

What’s your view on increased adoption of XRP by major market players? Let us know in the comments section below.

FSC in South Korea Will Shut Down More than 60 Crypto-Exchanges
Forex Crypto
Top 5 Forex Brokers
Top 5 Crypto Exchanges
Your subscription could not be saved. Please try again.
Thank you for subscribing. You will be the first to receive all the latest news, updates, and exclusive advice from the AtoZ Markets experts.
Everyone is reading
The Legal Battle Between the SEC and Ripple Continues
Cryptocurrency Market-Experts Make New Predictions
Dogecoin Crashes and Bitcoin Market Awaits Fed's Meeting
close ×