During one of the meetings, Changpeng Zhao has revealed to the crypto community how Binance managed the $40m worth Bitcoin theft.

20 May, 2019, | AtoZ Markets – On May 19, Zhao, the co-founder and CEO of Binance, explained how Binance managed the $40m worth Bitcoin theft. According to Zhao, due to network security damage, the hackers were able to obtain API keys, two-factor authentication codes. Also, hackers gained “potentially other info” of the Binance users.

Binance’ Hackers Were Patient and Flexible in Their Techniques

“CZ,” noted in his recent letter that the hackers “had the patience to wait. And they could execute well-prepared actions through multiple seemingly independent accounts at the most convenient time.”

He explained that as the hackers were patient, they managed to pass Binance existing security checks and get away with 40 mln USD. Zhao expressed his frustration that the company was “not able to block this withdrawal before it was executed.”

On May 15, in its blog update, Binance announced that it had completed its system upgrade. And it would resume all trading activity at 1:00 PM (UTC). The company had resumed withdrawals and deposits from its platform in less than two weeks after. Also, its service is on suspension due to the hack mentioned above.

Binance Remains Transparent in Its Communication

Binance spread information about the incident to the outside world through all communication channels, including Telegram, Twitter, and Medium. It is after confirming the hacking of its platform,  Being completely transparent in communicating with users, Binance was able to receive “huge support” from them. Later, the company decided to give away  BNB tokens worth $1.2 million. It was an apology for weeks of the service hiatus and to express its gratitude to the community,

According to the Binance’s announcement, all users during the promotion period could split a pool of 50,000 BNB. But all users must with a valid trading volume of 1 BTC or more across any trading pairs on Binance. Notable that the crypto community, in its turn, provided entire support to the crypto exchange. People were defending the exchange through different social media platforms and helping to answer questions related to the incident.

The so-called Binance Angels were”addressing questions” and “reassuring” users on “multiple communities.” Analytics were helping with the tracking of the stolen funds, exchanges, and wallet services. They were offering to help by blocking “any deposits associated with the hacker addresses.” And they also provided “numerous offers for help from law enforcement agencies around the world.”

CZ Will Reorganize the Blockchain?

During his recent AMA (ask me anything) live-stream on Twitter, CZ made an exciting announcement. A Bitcoin Core developer had suggested that it would be technically possible to roll back the single Bitcoin transaction. That was carried out by the hackers by “hugely incentivizing the miners.” The stream happened just after the Binance team told that to Zhao. CZ mentioned the idea of the blockchain reorganization, which he later, however, called a “taboo topic.”

Later the Binance CEO pointed out a little confusion regarding the blockchain reorganization talk. It sparked a discussion in the Binance’ community. Longtime bitcoin aficionado, Davincij15 stated in his Twitter that such a rollback would not work. And the only outcome might be a splitting of Bitcoin’s chain.

Another user compared the situation to the DAO hack. Binance team, however, decided against the idea of the ledger reorganization, by saying that “it’s not possible, bitcoin ledger is the most immutable.” 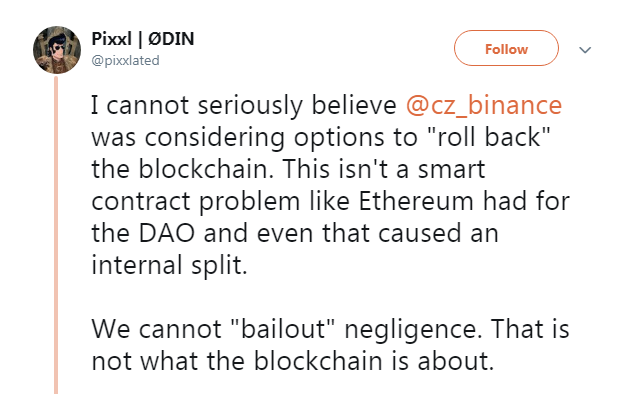 Binance Being Hacked for Its Good?

The crypto exchange CEO remained transparent and outspoken regarding the recent issues of the Binance’ security systems. Changpeng Zhao concluded his speech by saying,” we have spoken with various team members. And it correctly analyzed by community members, such as Gautam Chhugani. This incident may be a good thing for us in the long run. Security is a never-ending practice.

There are always more things to do in security. And we have implemented many of them in this last week and will continue to achieve more in the future. Given this incident, Binance has become far more secure than before, not just in the affected areas, but as a whole.”