Get VIP Trading Signals Market Watch
Trade Now Your capital is at risk.
It has come to AtoZMarket's attention that Binance is facing XRP (Ripple) withdrawal issues for the past few hours.

6 November 2019 | AtoZMarkets - In the past few hours we have received a few reader requests to speak to Binance. Presumably, these users have been facing challenges about their XRP transactions.

To test the issue, we have assigned one of our editors to check and see if Binance was having XRP wallet or withdrawal issues. While the first part of the test went without any issue, the processing of the XRP withdrawal failed in all attempts.

Update: Based on our last conversation at 12:00 noon GMT, Binance has informed AtoZMarkets that they have fixed the XRP withdrawal issue. The issue was due to system congestion, not a hacker attack.

So the following is the issue:

NOTE: No fund is being deducted from users' wallets. 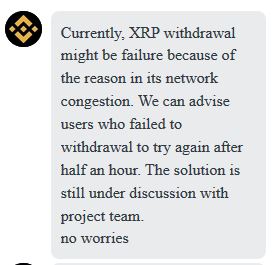 We took the issue to Binance support. According to the support team, the case is not isolated. However, Binance is facing a network congestion issue. The project team is working on a possible solution.

Not the First time

At the moment, there is no major bull run. The (ripple) XRP price has been sideway as well. Let's hope that the withdrawal failure is just a technical glitch.

Editor's note: Binance has been one of the most secure cryptocurrency trading platforms. CZ is famous for his "Funds are SAFU" comment. It is likely that there is a glitch or restricted XRP withdrawal is a part of the Binance risk management operations.

Conflict of interest disclaimer: The author of this article either owns or have purchased XRP in the past 12 months.