Binance, one of the world’s largest cryptocurrency exchange has finally introduced Binance decentralized exchange on its native blockchain.

April 23, 2019, | AtoZ Markets – The much anticipated Binance decentralized exchange (DEX) went live late last week ahead of its planned schedule. The exciting news was shared with the crypto community through the micro-blogging site Twitter where Binance officially announced the launch of Binance DEX.

The world’s top cryptocurrency exchange by adjusted volume announced the news on Tuesday, saying that while trading will begin “at a later date,” users can now create wallets on Binance DEX. 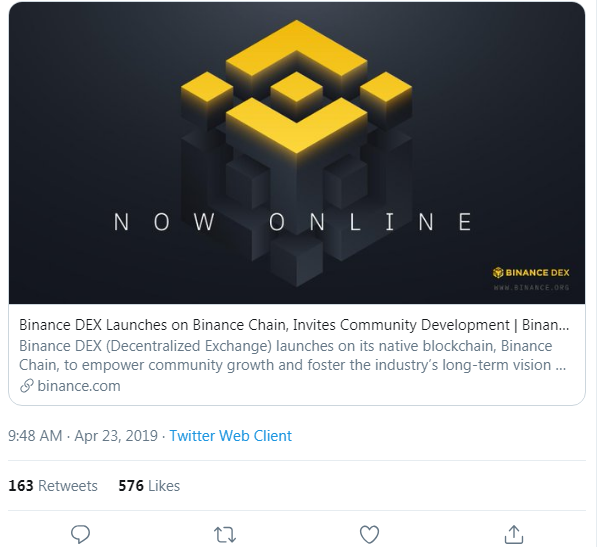 Following the announcement, the CEO of Binance,  Changpeng Zhao said:

“We believe decentralized exchanges bring new hope and new possibilities, offering a trustless and transparent financial system. … With no central custody of funds, Binance DEX offers far more control over your own assets.”

The DEX platform offers a similar interface to its existing centralized exchange, with some additional features, such as an option to generate a 24-word mnemonic seed phrase to secure users’ private keys. What is more, the launch of the DEX follows a two-month testing period, during which Binance said nearly 8.5 million transactions were made across various competitions and programs.

The news comes just a week after the firm announced its native blockchain, Binance Chain, has been launched. Its exchange token BNB has also been launched as the native asset on the blockchain to replace the previous Ethereum ERC-20 token. Holders of the ERC-20 BNB can now swap them for the native form on Binance.com. 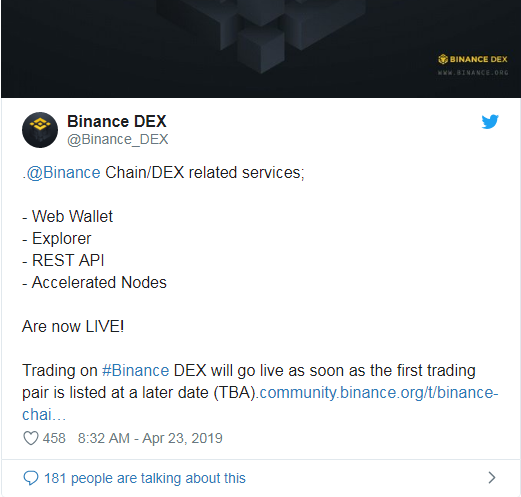 Binance Chain is a blockchain project started by Binance exchange and has since involved a whole community. The project will ensure the creation of a blockchain that will serve as an alternative marketplace for issuing, using, and exchanging virtual assets in a decentralized way.

Binance Chain supports various wallets at launch, including Binance’s official Trust Wallet, as well as offerings from Coinomi, Ledger, Enjin, Exodus and more. The exchange is also inviting other crypto projects to get involved by issuing new tokens on Binance Chain.

Earlier, Malta-based crypto exchange OKEx also announced in March a plan to launch a decentralized exchange called OKDEx on its own blockchain OKChain. The exchange said that OKChain is currently at the “final” development stage and that a test network launch is expected in June.

Moreover, Singapore-based cryptocurrency exchange Huobi said last summer, that it would evolve into a standalone DEX, at the time offering funding for developer assistance in creating an open-sourced blockchain protocol for the effort.

IG Group Announces 3-Year Partnership with Teach for Australia
Forex Crypto
Top 5 Forex Brokers
Top 5 Crypto Exchanges
Your subscription could not be saved. Please try again.
Thank you for subscribing. You will be the first to receive all the latest news, updates, and exclusive advice from the AtoZ Markets experts.
Everyone is reading
SEC vs Ripple: Court Orders SEC to Disclose Its Cryptocurrency Policy
Can Ripple Break Below $0.55 Significant Event Level?
Ethereum Facing Support Around $2,300 Price Area - Will Strike Upward?
close ×