Binance’s CEO, Changpeng Zhao(CZ), noted that Binance Chain is not Ethereum Killer. It is against the launch of the long-awaited new blockchain Binance Chain. He clarified that even if some projects that run on Ethereum may want to switch to Binance Chain to benefit from its increased speed. This should not be a competition.

Binance Chain and Binance DEX in a Brief

Changpeng Zhao noted that the Binance DEX build on top of the Binance Chain. That will use Binance Coin as the platform’s native coin. He said that during one of his early interviews.

Binance Chain, in its turn, will mainly focus on the simple transfer of assets and the release of tokens. Binance CFO Wei Zhou claimed that the company intended to launch the game-changing platform “by the end of the month. It was alongside the main net for Binance Chain.” He said that in a recent interview at the Paris Blockchain Week.

Earlier crypto news media reported that Binance, well known for its community-friendly activity, had decided to enable its users to keep ERC20 BNB. The company had also explained a method for retaining ERC20 BNB.

According to the Binance team, users could withdraw their ERC20 tokens from Binance.com, Ethereum wallet, or any other wallet. The wallet had to support Binance Chain, including Trust Wallet, AtomicWallet.io, and others before 7:30 AM on the 23rd of April to keep those tokens. As per exchange, no withdrawal of ERC20 BNB from Binance would be allowed after the 23rd of April. Deposits will be allowed, for a limited time.

Although it remains unclear how Binance Chain and Binance DEX launch will go, quite overwhelming reactions have already appeared from specific media. 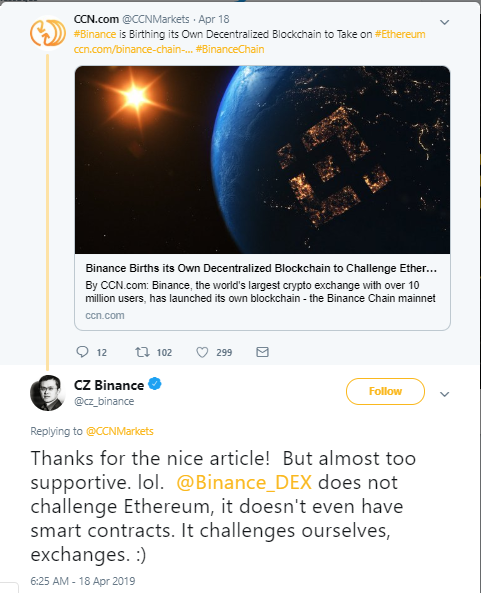 One media channel tweeted on the Binance article. “ is Birthing its Blockchain to Take on #Ethereum. “ CZ responded that Binance Chain would not challenge Ethereum. However, Binance CEO added, that on the other hand, the company would challenge exchanges. Ch.Z. Added that ETH could do a lot of things that Binance Chain cannot.

Other news portals, including one of the most well-known rating systems – Weiss Ratings – confirmed that Binance Chain is not Ethereum Killer. The company noted that the company’s newly launched project is not a competition for Ethereum. Because  “ETH is a world computer, and Binance is a DEX.” 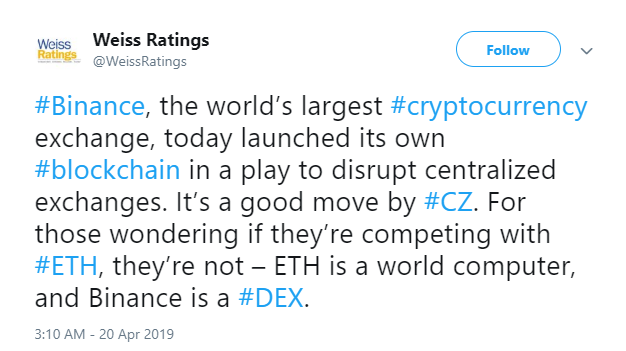 However, some Twitter users disagreed with Weiss Ratings’ opinion. In response to the Weiss Ratings statement, one Twitter user responded: “Yes, they are competing with ETH for their token launch panel. This was largely the main driving force behind ETH demand in 2017. And now, Binance is accepting it by offering more tokens (access to the largest exchange). “ Another user added, “Binance is not a DEX. ETH is not a world computer.“