According to Forbes, Binance CEO was reported to expect the next Bitcoin 'bull run' to start 'sooner than later'. However, the crypto exchange firm boss has said that his comment was misconceived.

Bitcoin has disappointed many of its enthusiasts this year. The big Cryptocurrency which was meant to lead the way this year didn't meet the value it was predicted of in the previous year. There were many pre-2018 pro-BTC predictions from a realistic $50,000 to a lofty $1,000,000. All these have been laid back already as the Crypto market slumped instead. Before 2017, Bitcoin was trading less than $1000 but at the end of the same year, price skyrocketed by about 2500% to hit $20,000. However in 2018, more than half of this has already been lost as the Crypto market lost bullish appetite. Currently, the market is threatening to go deeper as it has not been able to raise above the current price pessimistic zones. Bitcoin did not fall alone but has dragged the whole Crypto market in the red zone due to its big market dominance.

Despite this market bearishness, some well-respected persons in the Crypto-sphere have argued that the bullish run would resume. Recently, the CEO of crypto exchange firm Binance, has been credited with statements that were perceived to support Crypto and Bitcoin 'bull run'. Changpeng Zhao, the top boss at Binance, has said that he expects another bitcoin 'bull run' to happen ''sooner or later''. Mr Zhao was telling CNBC Crypto Trader Program that, though he might not know what would catalyze a bitcoin bull run, but ''I am certain it will happen …… Sooner or later, something will trigger it''

Despite that Bitcoin and cryptocurrency trading on Binance is down by almost 90% from January, Mr Zhao believes the company and the market at large are healthy and still profitable.

''Compared to January (2018), we are probably down by 90%. So we only have one-tenth of the trading volume compared to what we had in January. But, compared to like a year or two years ago, we are still trading at huge volumes. Business is still okay, we are still profitable, and we are still a very healthy business.'' Changpeng Zhao said.

Meanwhile, recently in a twitter post, Mr Zhao has denied the 'bull run' reports. He said his discussion with CNBC was misconceived. 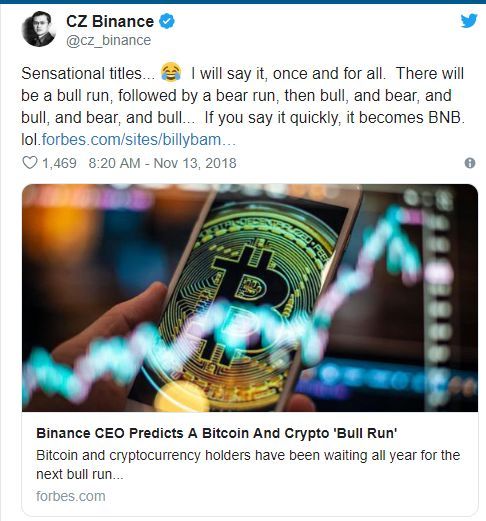 His post which was rather sarcastic, highlights the unpredictability and randomness in the Crypto market. He said price will go up and down and in that manner until it gets its next dominating direction.

What are the technicals saying about Bitcoin? 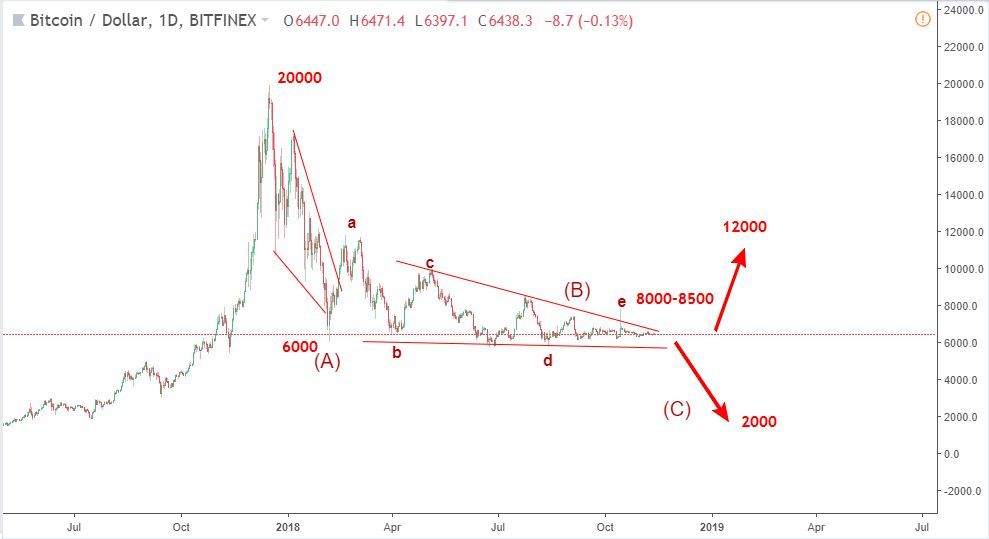 From technical analysis perspective, the bears still weigh hugely on the Bitcoin and crypto market. Since the drop to $6000 in February 2018, price has not been able to be lifted back to the profit zone. A sideway triangle pattern is completing after this price behavior and if broken downside, much more lower prices will most likely happen. If price breaks downside, Bitcoin might head to its price zone early 2017 at $2000. On the other hand, going by the fact that price has been holding above $6000 since February/March 2018, some believe that $6000 might be the price floor of the next bull run. We might see the bulls finally having the much-needed breakout to $8000-8500 or even $12000 from this month till next year after a bullish breakout.

Open Account Review
Everyone is reading
Daily Forex Option Expiries
Ethereum Price Breaks Above $1400 - 3 Reasons Behind This Rally
Ethereum Nose Dive Below $1,200 Psychological Level - What Next?