April 16, 2019, | AtoZ Markets – On Monday, the world’s largest crypto-exchange Binance announced that it would exclude Bitcoin SV (BSV) from the Bitcoin list after a conflict between the BSV creator Craig Wright and Binance director Changpeng Zhao.

The announcement of crypto exchange enters into force in less than a week and on April 22 all Bitcoin SV trading pairs will be excluded from the bitcoin list on Binance platform. 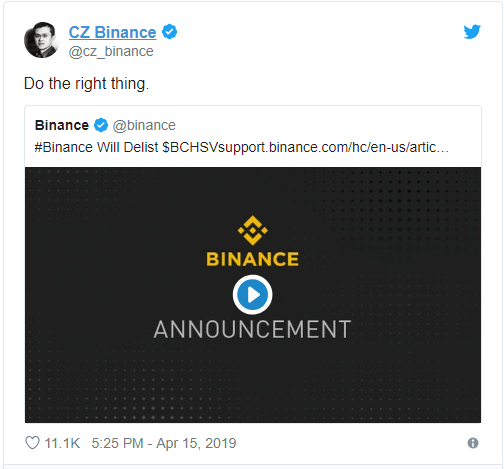 The company will continue to support Bitcoin SV withdrawal until July 22. The crypto exchange announcement says :

“we periodically review each digital asset we list to ensure that it continues to meet the high level of standard we expect,”

Binance listed a number of factors that it pays attention to when checking the reliability and quality of cryptocurrency. The exchange mentioned the following criteria:

Earlier, Atoz Markets wrote about the intention of Binance CEO Changpen Zhao (Czech Republic) to delist BSV in response to Wright’s attacks on Twitter users who claim that he is not Satoshi Nakamoto, the founder of bitcoins.

It is likely that Bitcoin SV is being removed from Binance, because of Wright’s attacks on a Norwegian bitcoiner under the Twitter nickname Hodlonaut. The conflict started when BitcoinMagazine published an article stating that Craig Wright has intentions to sue Hodlonaut who accused Wright of being a fraudster and started a serious battle of words on Twitter between himself, Wright and his fans.

Craig Wright is notoriously known for claiming to be the real Bitcoin founder-Satoshi Nakamoto. Over the past few years, Wright has argued that he is the man behind bitcoin founder’s pseudonym, but his evidence for this statement is widely disputed.

The cryptocurrency community does not believe that Craig Wright is Satoshi. In fact, several hashtags have surfaced in response to the claims #Faketoshi and #CSWFraud. Later, in BitcoinMagazine ‘s article, Craig promised to sue anyone that refutes the claims he is not Satoshi and was demanding an apology from Hodlonaut.

It is worth noting, that BSV founder also has sent out cease-and-desist legal letters, to the people claiming that Craig Wright was not Satoshi, including Peter McCormack, the host of the podcast “What Bitcoin Did.”

CZ in his turn in a series of follow-up tweets called Craig Wright “a fraud,” and added that “the real Satoshi can digitally sign any message to prove it.” 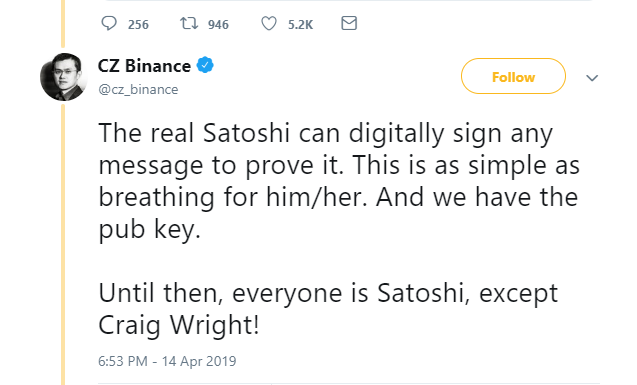 Other crypto exchanges on the Binance’s side

On Monday, ShapeShift CEO and long-time crypto entrepreneur Eric Voorhees announced that his crypto exchange would also delist the BSV bitcoins due to the same reasons.

Voorhees expressed his support of Binance and CZ sentiments. “BSV will be removed from ShapeShift after 48 hours”, crypto exchange CEO said.

Another exchange, based in San Francisco Kraken, noted that it is considering exclusion of Bitcoin SV from the lists by asking Twitter users in the survey if this should be done.