29 June, AtoZForex .com Lagos – Barclays Capital has given its opinion and trade recommendation as regards the ongoing Greece situation in its weekly note to clients. Accordingly, the bank has given FX trades recommendations based on macro-technical driven factors. As Tsipras called for a sudden referendum over the weekend, following his rejection of the latest “take it or leave it” offer from its European creditors, it is almost certain that a deal will not be reached before June 30, the due date for its IMF payment.

Barclays has now pointed out that:

“The escalation of political uncertainty in Greece will likely imply a cautious stance from investors, who we believe will demonstrate a broad-based flight to quality. Under a risk-off environment, we expect the USD and the JPY to benefit in FX, while we look for high-beta currencies, including commodity currencies, and the EUR to come under pressure in the coming week,” Barclays argues.

“We recommend staying short EURJPY spot and also like being long USDCHF spot. We expect the EUR to come under pressure in the coming week as the Greek political uncertainty escalates further and like staying short EURJPY. We also like being selectively short CHF given our expectations that it will likely underperform higher-quality safe-haven currencies such as the USD. More broadly, USDCHF appreciation should be supported by a strong US employment report later in the week as well,” Barclays says as a rationale behind this call. 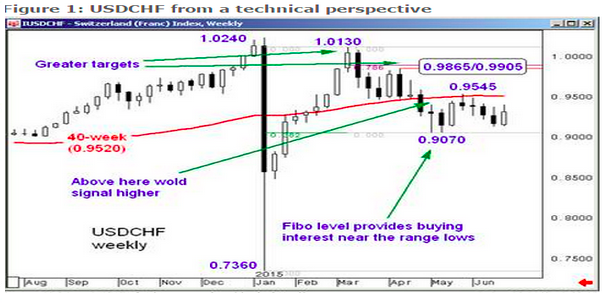 “Technically, we are bullish USDHF and would look to buy against support near 0.9070. Closing the week above the 0.9280 area confirms a bullish engulfing candle and signals further upside in range. Our bullish conviction would be further encouraged by a move through initial upside targets near 0.9545. Beyond there we are looking for gains towards the 0.9865/0.9905 area and then higher towards greater targets near the 1.0130 reaction high,” Barclays adds.

Also, in event that a resolution is finally reached, the bank has argued that being long USDCHF would still be a good trade. “Fundamentally, and once the near-term uncertainty dissipates, we expect market interest in long USD positions to pick up again, as we envision another leg of appreciation, particularly against the EUR, in the coming months,” Barclays argues.