On a sector basis, BoAML thinks that mining continued to cut jobs amid devaluing oil prices. Construction is particularly sensitive to weather and ramped up in 4Q, so there is a high risk of weakening as well. In contrast, services sector labour growth likely remained solid.

“We expect the unemployment rate to remain unchanged at 5.0%,” BoAML noted.

The inability of the USD to rally on previous month’s 292k report leaves asymmetric risks for the Dollar into Friday’s NFP report. Moreover, markets are likely to continue to question the Fed’s ability to increase rates 4 times as the dots go against the current global risk-off backdrop caused by China and cheap commodity prices. Even a positive surprise is unlikely to assuage investors’ overall concerns about the US economy as the country’s debt hits a new record. 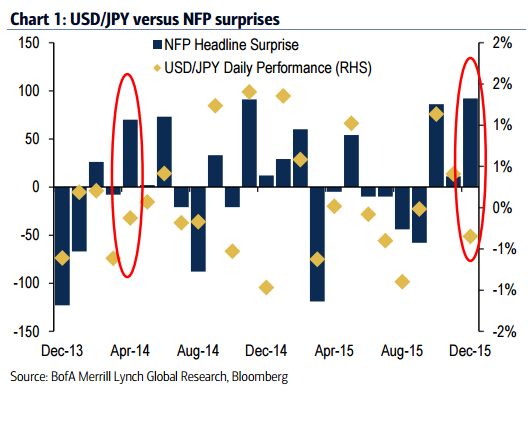 “We favor being short the USD against perceived safe-haven currencies, like EUR and JPY, which according to our regression analysis have the most consistent responses to NFP surprises,” BoAML projected.

Think we missed something? Let us know in the comments section down below!