Get VIP Trading Signals Market Watch
Trade Now Your capital is at risk.
The signs of the Bangladesh Stock Market Crisis already appeared in January 2011, whilst the crisis has grown stronger until date. Can the Dhaka Stock Exchange Index manage to push higher again from Taka 4000 to Taka 6000? Let's dive into more details about Bangladesh Stock Market Crisis Outlook for 2020.

The Bangladesh Stock Market has seen many ups and down throughout its journey from 1952 to 2020. The biggest shock of recent decade was the 2011 Market Crash. It was the biggest drop after creating the highest peak on DSEX at Taka 8770. After this disaster, the price has never went to retest its price high of the last 9 years. 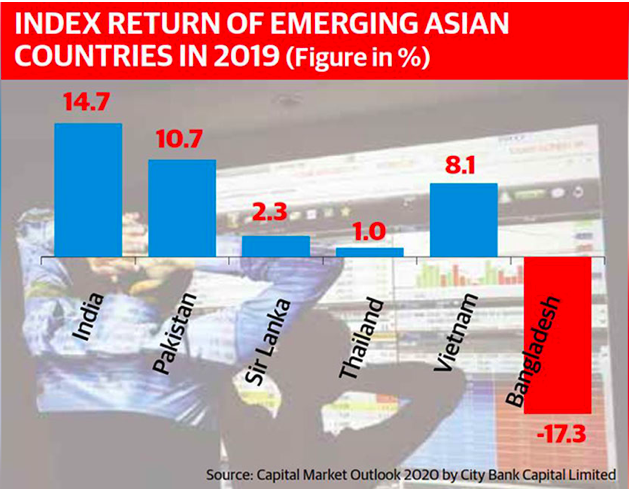 On the Investors and Traders perspective the Two Most Highlighted Reasons are:

Technical View of the 2011 DSEX Crisis

There are certain debates about Technical Analysis in Bangladesh Stock Market. Many investors think that Technical Analysis does not work as there is a high degree of Manipulation present in the market. Though it is manipulated, the Bangladesh Stock Market can be predicted with proper Market Context based analysis. Let's take a look at DSEX 2011 Crash - 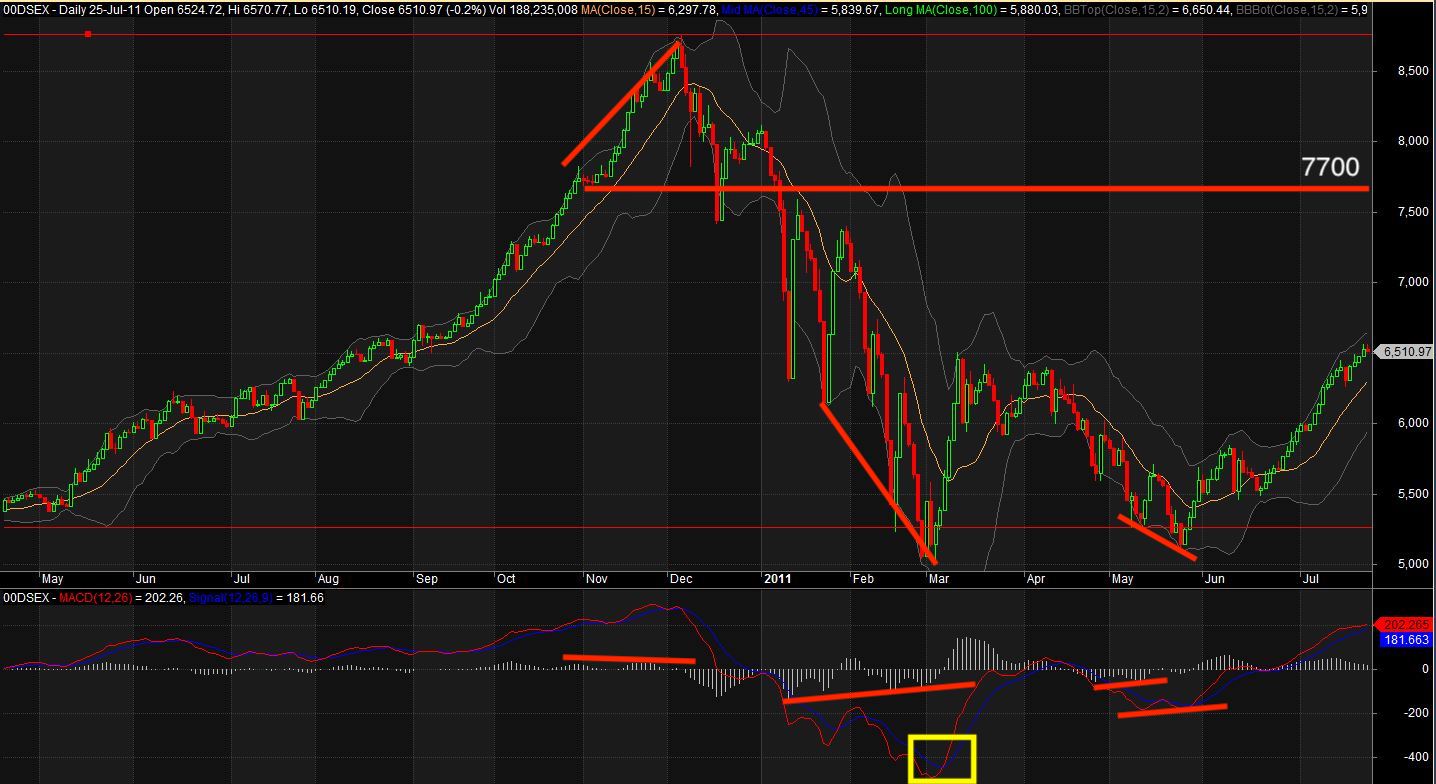 DSEX has been quite stable with the Bullish trend which started on April 2009 and lasted for around 1.7 years. The price action has been non-volatile and impulsive throughout the Bullish phase but notably MACD Histograms were getting smaller. Certain Bearish Divergence started to form on November 2010 which eventually signalled a downturn. Traders unaware of the emerging Bearish Divergence held the stocks longer while the price broke below recent lower high at Taka 7700.

After the crash, the price formed Bullish Divergence while pushing lower between January 2011 to March 2011. As the Divergence confirmed with a MACD line crossover below 0.00 area, the market pushed higher impulsively towards Taka 6500. Later on May 2011, the price again managed to form a Bullish Divergence while forming a Double Bottom Chart pattern. The Bullish intervention further confirmed with MACD line crossover. Additionally, 3 Point Higher Low Reversal pattern support to pushed the price towards Taka 6500.

As per our observation, Technical Analysis along the way could have saved investors and traders to close out losing position before time. Through proper Risk Management, Discipline and Patience, Bangladesh Stock Market crash may turned into a fruitful one.

Bangladesh Securities and Exchange Commission (BSEC) and Bangladesh Government are trying to control and attract investors in the Stock Market. They are trying to attract more companies to become listed in the exchanges. Similarly, long-term investors and financial institutions to invest in the market. So that the market can regain the required stability in the long run. 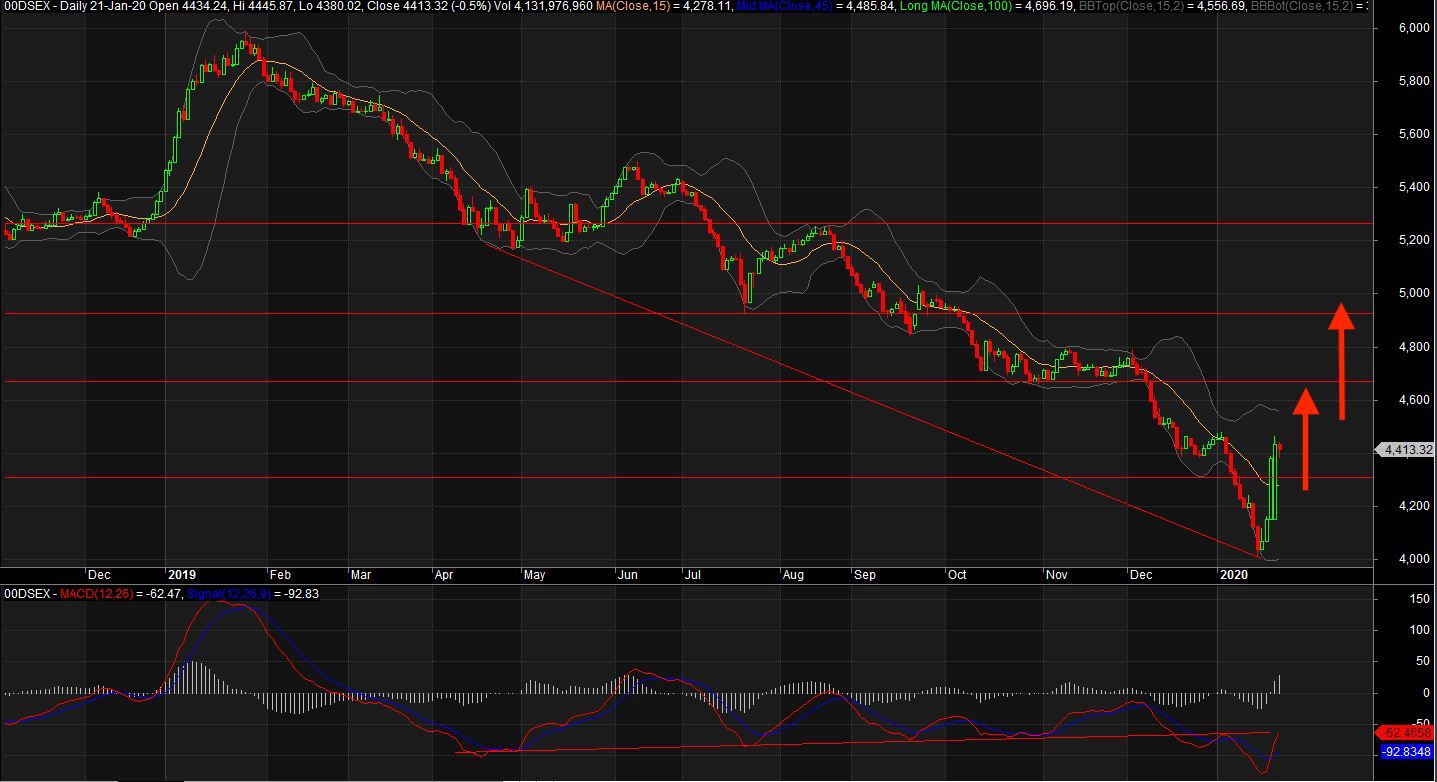 In the Technical Perspective, recently the price managed to bounce higher off the Taka 4010 support area. Despite having Long-Term Bullish Divergence in place, the price has been quite ignorant to the Bullish intervention. Currently the price is residing above Taka 4400 and a daily close above Taka 4500 may lead the price towards Taka 5000 again.

Before you start trading with Momentum trading strategy, you'll want to read this.

Best Australian Based Forex Broker in 2021
Broker of the month!