Banco de Mexico intervention helps the Mexican currency in these hard times. Yesterday., MXN advanced versus USD more than 1 percent. What is next for MXN?

6 January, AtoZForex – The Mexican Peso shortly increased versus USD more than 1 percent on Thursday. The shift came after the central bank of Mexico implemented steps to revive its recessing currency.

Yesterday, AtoZForex reported that the Mexican currency plunged for a second following day to record lows versus US dollar. Traders were concerned about the negative influence of Donald Trump’s agenda on the Mexican economy.

Additionally, the announcement from the Ford Motor that it revokes manufacturing of a $1.6 billion plant in the US has weighed on Peso on Tuesday. Moreover, Donald Trump has hit the automaker for transferring jobs outside the country. Ford CEO Mark Fields indicated that the decision not to invest in Mexico appeared after the firm assessed demand potential.

The Mexican Peso briefly traded more than 2 percent weaker against the greenback on Wednesday, reaching 21.619 points. However, in the wake of Banco de Mexico move in relation to Peso, Mexican currency advanced shortly against USD more than 1 percent. 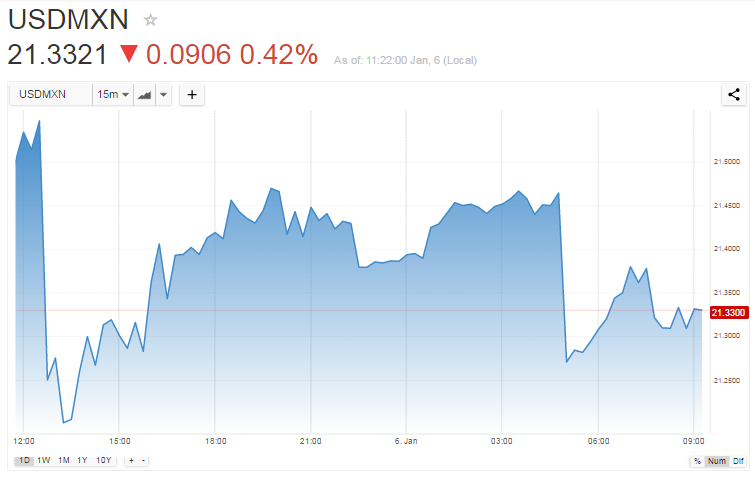 The Director of national operations for the central bank, Juan Garcia, has stated that the banks commenced selling of US dollars. However, Mr. Garcia did not provide any details in regard to the amount of dollars the bank was selling.

Will Trump's agenda drag down MXN?

Mexican currency has been largely affected by the result of the US elections on the 8th of November. With Donald Trump winning the place in the White House, Mexican Peso plunged to historic lows.  It dropped over 6 percent versus USD.

The market anticipates that the administration of Donald Trump will examine all the trade agreements between the US and other nations. During his campaign, Trump criticized the North American Free Trade Agreement (NAFTA) between the US, Canada, and Mexico. He stated that the pact negatively impacted the US economy and workforce. Therefore, Trump said he would negotiate better terms with Mexico and Canada.

The global head of currency strategy at Brown Brothers Harriman, Marc Chandler, said he anticipates the peso's disadvantage against the US dollar to continue. Yet, he added that Wednesday's sell-off was "a bit exaggerated."