The ZEW survey for April came at 64.8, an impressive result as it surpassed the forecast of 63.7. Also it depicted six consecutive months of growing economic sentiment. On the other hand, the German ZEW survey for April came at 53.3 as against the forecast of 55.6, whilst marking a result that is below previous months result of 54.8. The decline can be derived due to the result of the devastating situation of Greece. Initially, the result boosted the EURUSD slightly before giving back the gains and ending the day almost at breakeven. The good data adds to the bout of encouraging readings from the Euro area and proves that the QE may be working.

The Monetary Policy Meeting Minutes released yesterday provided insights into the reasoning behind the Central Banks decision to hold rates at record lows of 2.25%. The decision was supported by increase in Household consumption in the December quarter. Supported by low interest rates and rising household wealth, but also aided by other macro economic and international conditions. 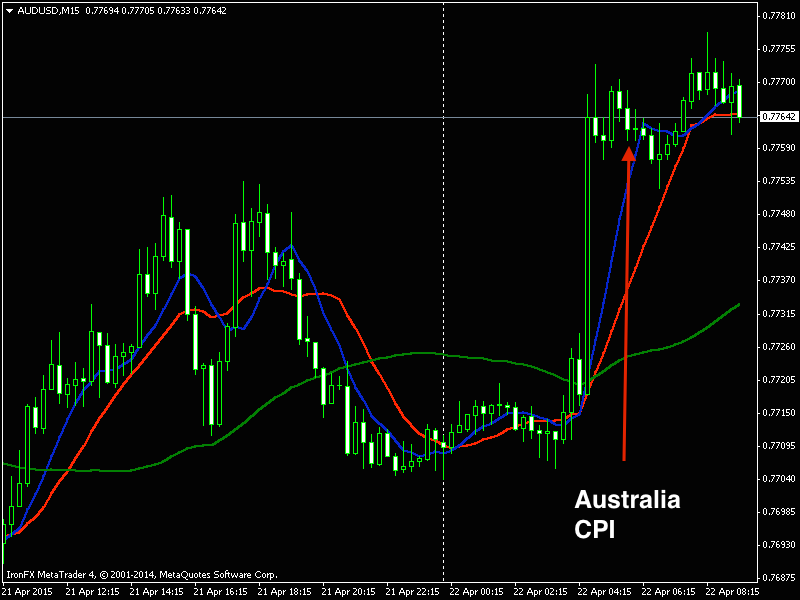 Australia’s CPI came higher than the forecast 0.2%. This was perceived as good news, since higher inflation eases pressure on the Reserve Bank of Australia to the further cut of interest rates. The Aussie advanced against all its major peers after the release. The Aussie strengthened against the NZD, moving away from parity with the kiwi dollar following the consumer-price data. This reduced the odds of a policy change next month by the Reserve Bank of Australia. The yen halted a two-day drop versus the U.S. dollar after Japan reported a trade surplus, for the first time in three years. This impact was larger than the expected forecast.

The rest of the economic calendar for the day is rather light. From the UK, we have the MPC Official Bank Rate Votes. According to minutes from the last policymakers, the Bank of England members see a risk that sterling could strengthen further and leave inflation below target for longer. The MPC Official Bank Rate Votes is expected to remain at 0-0-9.