4 June AtoZForex, Lagos – As expected, the ECB left its Minimum Bid Rate at 0.05%. as recent data show risk of deflation as recent inflation data shows the country under deflationary pressure. During the ECB Press Conference, President Draghi insists that the effect of the Quantitative easing program is being felt by the economy. He added that Reaching our objectives is conditional on the full implementation of our monetary-policy stance. The economy still improved despite uncertainty created by the Greek situation, as the country remains on the brink of default. Greek Prime Minister Alexis Tsipras is scheduled to meet with European Commission President Jean-Claude Juncker in Brussels on Wednesday evening for a crucial meeting which could be a decider as to whether the indebted nation will get additional aid. The Euro continued its upward run on the hawkish tone of the conference.

UK’s Services PMI points to slower recovery, coming at 56.5. According to Markit, the UK service sector continued to register strong expansion in May. The rate of growth in both total business activity and new work slowed to the weakest in 2015 so far, but nevertheless remained sharp overall and stronger than the long-run survey averages. Outstanding work continued to rise despite further strong workforce growth, while firms reported lower business uncertainty following the result of the general election. Sterling fell sharply, for about 90 pips in the minute after the release. 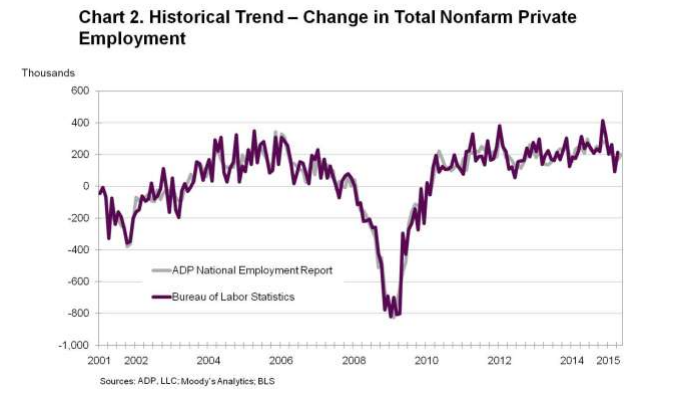 The ADP Non-Farm Employment change showed that Private sector employment increased by 201,000 jobs from April to May, beating forecast of a 198,000 increase. This adds to the positive outlook of the job sector. Markets will now wait for the NFP on Friday to get a clearer picture as to the current economic situation. The Trade Balance of the world’s largest economy also narrowed more than forecast as import fell, signalling that merchandise flows were returning to normal following a port-related surge.

Canada’s Trade balance came disappointing again, posting its 2nd-Widest Ever After March record, coming at -3.0b in May. BOC Governor Stephen Poloz expects the economy to regain momentum after growth faltered in the first quarter, an effect of the plunge in oil prices which derailed exports and investment. Gov. Stephen Poloz is expecting the positive effects of the decline in oil prices to overshadow the negative beginning in the second half of 2015, helped by an acceleration in non-energy exports.

Australia was hit with double negative data as the country posted weak retail sales data and its biggest-ever trade deficit. Retail sales Missed expectations coming flat at 0.00%. While the trade deficit came at a disappointing -3.89B. The Australian Bureau of statistics said the fall in exports was “driven by coal, coke and briquettes, down $859m (22%) as a result of the temporary closure of ports due to severe weather conditions.” The AUD fell about 40 pips against the USD immediately after Australia retail sales and trade balance disappointed.

For the rest of the day