The US data and August US Nonfarm Payrolls job report Forecast, dominate the markets this week. OctaFX shared its Weekly Forex market Forecast and market insights.

28 August, OctaFX – The United States takes center stage this week, as foreign exchange traders look to a number of high-impact economic data released from the American economy, including second quarter GDP, ISM manufacturing and the Nonfarm Payrolls job report for the month of August.

Investors will also digest the outcome of the recent Jackson Hole symposium, and look to U.S politics, where the possibility of a U.S government shutdown in September may start to impact on financial markets.

Traders should also be aware that the UK has an official summer Bank Holiday on Monday. This may lead to a reduction in trading volumes coming from London. 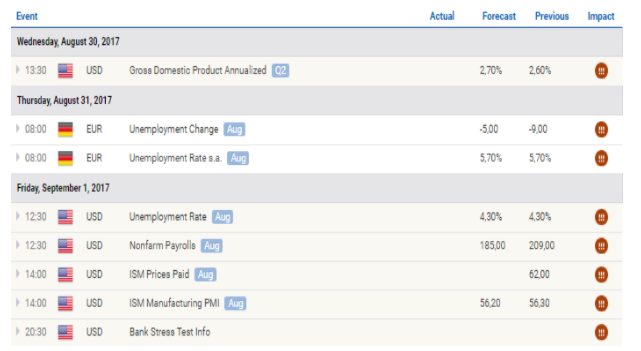 The US economy releases second quarter gross domestic product figures. Analysts expect an annualized growth of 2.7 percent. GDP Annualized is a gross measure of market activity. Because it indicates the pace at which a country’s economy is growing or decreasing.

A rise in the German unemployment has negative implications for consumer spending, as there are less people working and therefore diminishes economic growth in Germany.

The Nonfarm payrolls jobs report, which presents the number of new jobs created during the previous month, in all non-agricultural business, is expected to show 185,000 jobs were created in the U.S economy.

This article about August US Nonfarm Payrolls job report Forecast, should not be taken as advice nor substitute for professional marketing consulting. Forex margin trading involves substantial risks. Forex margin trading exposes participants to risks including, but not limited to, changes in political conditions, economic factors, acts of nature and other factors, all of which may substantially affect the price or availability of one or more foreign currencies.