June 01, 2019 | AtoZ Markets – After a difficult start to the week, cryptocurrency valuations skyrocketed to the north on Wednesday, led by big advances in EOS (EOS) and Cardano (ADA) altcoins. Bitcoin returned above a key psychological resistance after hitting $9,000 on Wednesday. In the process, BTC’s dominance rate has dropped to just over half as the ‘decoupling effect’ continues to alter crypto-market dynamics.

AtoZMarkets reported earlier this week that the representative of the FSA reportedly showed opposite views regarding crypto ETF’s and cryptos overall. The Japanese regulator said that such cryptocurrency as bitcoins (BTC) do not have intrinsic value, and this can lead to intolerable price volatility.

Japan has one of the most strict regulations regarding crypto. The rules were implemented after a series of high-profile hacking exchanges, but the country now has one of the best systems in place. Moreover, Fujimaki during the discussion of ETF’s adoption in Japan also made few remarks regarding hack incidents. The politician noted, the case of ETFs — crypto assets would be entrusted to banks and kept by custodians.

Bitcoin SV (BSV) has surged more than 110% in the last 1 week according to data from CoinMarketCap data. The coin started to rise massively after a piece of fake news about re-listing of BSV on Binance, which was flashed all over the internet. This makes it occupy the eight spot amid the top ten cryptocurrencies in terms of market capitalization. 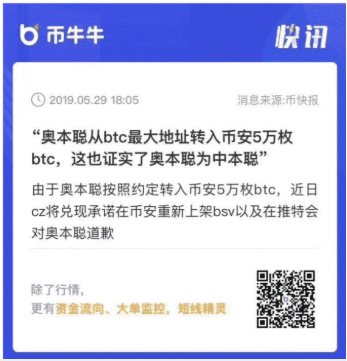 A WeChat screenshot was spread across China’s cryptocurrency media. Dovey Wan, a founding partner at Primitive Ventures spotted the fake news instantly and posted on twitter about it.

The G20 members are discussing how to implement the standards set by the FATF, experts suggest that there may be some problems when complying with globally unified crypto standards. The European Central Bank, however, claims that the risks that crypto represents to the financial stability of the euro area are controllable.

Russia is among the countries that have announced their plans to implement globally unified crypto standards. In addition, Japan, the host of the June G20 summit, has been actively working on implementing global standards on crypto assets.

Bitcoin whales are responsible for the bull market

The increase of 7% in the amount of BTC held by the major whales holding between 1000 and 10,000 BTC is responsible for the price surge, based on Diar’s data. This is a possibility as those BTC are nor lost but have been in the wallets and they have been quite active according to the report.

According to an analysis by Diar, there has been a steady increase in BTC being acquired by Bitcoin whales holding 1000 BTC or more. Those wallets currently hold 26% of the total Bitcoin circulating supply.

EOS advances 25% within a week

The recent EOS price action which is now holding the world’s fifth most valuable cryptocurrency by market cap. At press time, EOS has a market of $7.99 Billion according to coinmarketcap stats.

Today is the one-year anniversary of EOSIO software and the date for a major announcement by Block.one, there are hints by the EOS Founder that they are planning to launch an EOS-powered social network. As per various sources, the firm is now planning to buy back 10% of its shares, indicating that the company has a positive viewpoint on EOS coin and is investing in anticipation of the big EOS announcement.

Roger Ver shares his expectations on Cryptos and Blockchain

In an exclusive interview with AtoZMarkets’ Senior Journalist and Editor-in-Chief, Roger Ver discussed a few insights about Cryptos and Blockchain future. Roger believes that the entire ecosystem has been fractured into several thousand different altcoins, and all these different businesses and people are searching whether we build on this or build on that, and there is just kind of a dilution of the effort and the momentum that cryptocurrency had going into the year 2015 before the box became full. He also thinks that Bitcoin Cash, Ethereum, Ripple, Dash, Z Cash could give a big shot in the future.

BTCUSD forecast: what to expect in June

According to AtoZMarkets’ Senior Market Analyst, Sanmi Adeagbo shares his opinion on Bitcoin price and analyzed that the next upsurge might hit $10,000-$12,000 critical zone.

The month has been impressive for the market as the bulls gradually build on the December 2018 lows. Meanwhile, the current fall has created a big bearish daily candle on the BTC price chart. It seems price is starting a bearish correction and early in June, BTC could fall further. 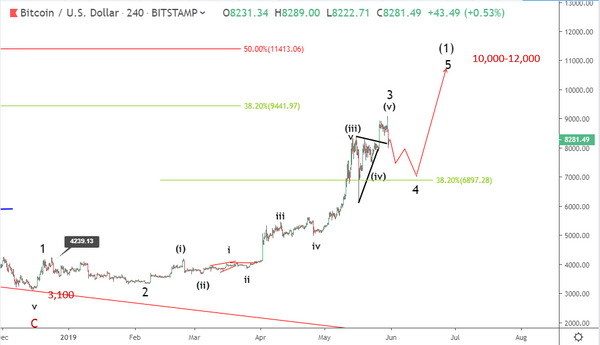 According to Sanmi’s Elliot Wave technical analysis, the 4th wave ended with a sharp triangle pattern. the 5th wave was expected to extend to $10,000-11,000 zone. Currently, the price has only hit $9,000 and if the current push extends further, we will have to believe the 3rd wave and not the 5th wave just ended.

Jack Dorsey Talks About Plans for Integrating Bitcoin on Twitter