June 15, 2019 | AtoZ Markets – After a positive start of the week, Bitcoin and altcoins prices surged from $7,650 level towards $8,700 (at press time). The cryptocurrency market is looking buoyant again after crossing the $250 Billion market cap in 2019. April and May were particularly bullish as Bitcoin and the major altcoins recover over 30% of the 2018 bearish trend. As per AtoZMarkets analysis, the buy volumes are significantly higher than the sell volumes, and if the bullish trend continues throughout 2019, BTC might target toward the all-time high.

The U.S. based financial research firm Weiss Rating announced the report on EOS rating results via a tweet published in June. The post says, that EOS was downgraded, because of its “serious problems with centralization.” 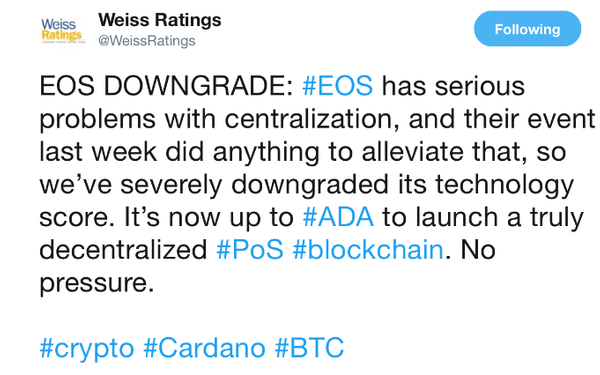 The research company mentioned the recent EOS event, which, according to Weiss Ratings “did anything to alleviate EOS technology score downgrade.” Weiss allegedly was speaking about the event that took place in Washington D.C. when Block.one company introduced its EOS based, social media project called Voice.

Norway-based crypto news platform CCN is experiencing a 71% fall in mobile traffic due to a recent update to Google’s search rankings. Notable, that CCN is not the only news platform, affected by the recent update to Google’s search rankings. The CCN representatives report that popular blockchain news portal CoinDesk has experienced 34.6% drop, and Cointelegraph has reached a 21.1% drop on mobile.

CEO of CCN, Jonas Borchgrevink, expressed his concerns that Google might be playing the monopoly game by controlling the search engine industry. According to Borchgrevink Google is against journalism ethics and free speech.

Due to the significant market valuation increase that BNB has experienced in the last couple of months, the chain validators approved to lower the fee structure on Binance Chain by 50 percent. Binance Coin surged approximately 6.50 percent from $31.80 to $33.90. BNB has outperformed the majority of the top cryptocurrencies in the market and is only $2 away from reaching an all-time high.

Binance coin price declined sharply on 7th May to $19.5 after it traded at $24.25 mark, which is the lowest since mid of April. Such a significant drop in price could have been due to Binance hack, which happened on the same date. BNB coin price traded at $6 level at the start of 2019. It is worthy of note that the price of BNB coin saw a massive surge of 350 percent when it rose to the highest price since January 2018.

Baidu search engine data has indicated that China drives Bitcoin rally amid the supposed ban on crypto-trading. The recent surge and drop in the prices of Bitcoin could have been helped by trends coming from the Chinese market.

The only thing that was affected by the Chinese government shut down on cryptos was the market valuation of Bitcoin. When the announcement was made, BTC price dropped 35.3%. After hitting a high of $5,000 the flagship cryptocurrency nosedived to $3,250 as the news about the ban spread. But today, the price has risen.

Alternatives for Binance US clients

Binance has announced that it will stop serving US individual and corporate customers on Binance.com in September 2019.

The crypto community suggests that in non-verified U.S. customers will still be able to bypass the restrictions and trade on Binance.com or Binance DEX using a VPN or by using one of the compatible wallets that already support native trading. In addition, Binance at the moment permits withdrawals of up to 2 BTC ($16,500) without any verification.

Visa, Mastercard and PayPal are set to be backers of Facebook crypto GlobalCoin along with a number of other companies, including Uber. Each will invest approximately $10 million into a foundation that will govern the coin, the Journal said citing anonymous sources. That money will be used to create the backing for the coin, which will be pegged to a basket of fiat currencies.